CEOs Farley and Musk Duke it Out Over Twitter

You know what they say, it’s all good fun playing on Twitter until someone gets hurt.

At least that’s the case with a Twitter feud between automotive CEOs Elon Musk of Tesla and Jim Farley of Ford. It all began on April 14, when Farley tweeted to his 32,000 followers “BlueCruise! We tested in the real world, so our customers don’t have to.”

And the tweet included a two-minute video in which Ford representatives talked about how the BlueCruise semiautonomous system works.

This was at 9:22 a.m. Many Tesla fans picked up on this tweet and felt it was a veiled reference and slam on Tesla, which relies on data collected by vehicle owners to improve its Autopilot semiautonomous system as well as push its Full Self-Driving Beta testing to completion.

Tesla is currently embroiled in several lawsuits about the deaths of people using the company’s Autopilot system. (TheDetroitBureau published a story today about the issue.) 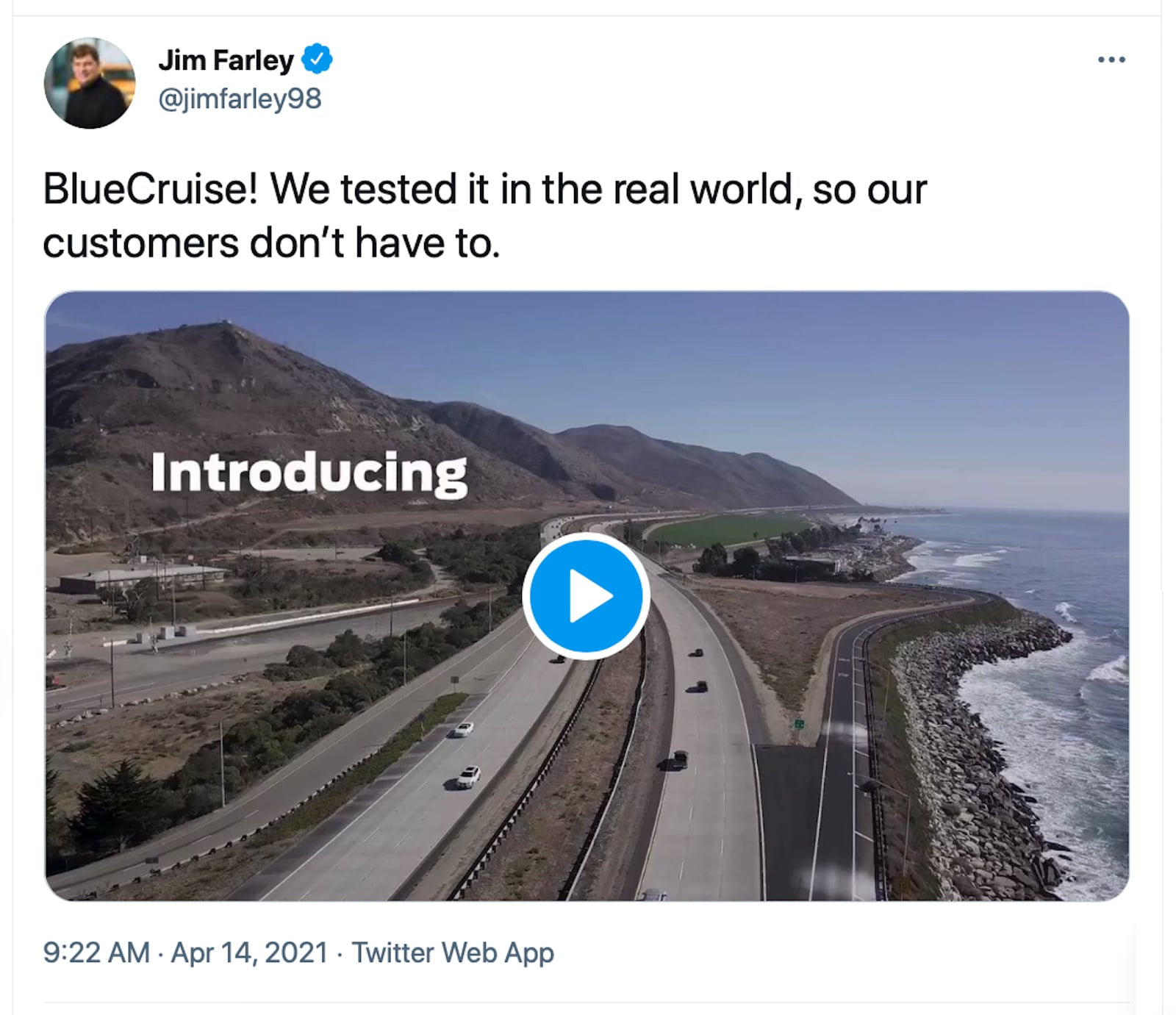 At 6:30 p.m., a self-described California-based multi-platform media company called Teslarati tweeted “Ford CEO Jim Farley took a jab at Tesla’s use of real-world owners to test its Full Self-Driving suite, while revealing its own BlueCruise” to its 422,000 followers.

This is when things really heated up. Just a few minutes later at 6:35 p.m. Musk tweeted “I found some footage of the (Ford test) drive.”

The tweet included a link to a YouTube video from the 1995 Chris Farley movie “Tommy Boy” in which Farley’s car is coming apart while driving on the highway.

Chris Farley, who rose to fame on Saturday Night Live, is also Jim Farley’s cousin. He has been quoted in the media several times as saying talking about Chris Farley’s death is a very painful thing. Chris Farley died in 1997.

Mike Szudarek, a public relations expert at the Detroit firm Marx Layne said this exchange shows both how PR has changed in the last 30 years and the dangers these changes present.

“When I started in the early 1990s, automotive CEOs were almost like gods,” Szudarek said. “They all wore sharp suits and getting to talk to one was like talking to a god. A rare thing that happened to few mere mortals.”

But with advent of social media platforms, such as Twitter, that has changed.

Twitter allows a guy like Farley, who is passionate about cars and even races them, to show his fervor to the public without being the message being filtered through a dozen PR experts and even more lawyers.

But it can also create a false sense of intimacy, which can be dangerous. Szudarek noted that earlier this year Musk posted a Tweet complimenting Ford for not going bankrupt and taking government money to stay in business. This might have created a false sense of Twitter friendship with Musk in Farley’s mind.

“Farley’s tweet about Ford Blue was a lighthearted shot across Tesla’s bow,” Szudarek said. “I don’t think this was meant to be mean. But this is an example of how things can get out of control very quickly on social media. Things escalate and people get turned off.”

However, Twitter feuds can become a real distraction to CEOs. Instead doing what they’re supposed to be doing – running multibillion dollar companies that employ hundreds of thousands of people around the world – they’re on Twitter exchanging blows with other CEOs.

“This reminds me of bets between mayors of big cities when their teams are playing each other in the World Series,” Kozak said. “It’s supposed to be fun and lighthearted, playful.”

But if one party doesn’t see a tweet as playful, watch out. Whether that was the case or not, Musk certainly could have replied with a tweet of a car going all over the road that didn’t feature Chris Farley.

What started out as a humorous tweet turned into a very personal exchange.

“It can be very hard to read or intuit intent on the Internet,” Kozak said. “Twitter can be a place where the personal values of a CEO can reflect well on the company brand as a whole. But it is also a platform where it’s all too easy to be seen as a bully. I do think Musk crossed a line by bringing in Chris Farley.”

This exchange is a good example of what can go wrong. There are good reasons for CEOs to be on Twitter, to be accessible. But this presents dangers and CEOs must be aware of that fact.