Twist on familiar name to celebrate its $80B electric-vehicle program. 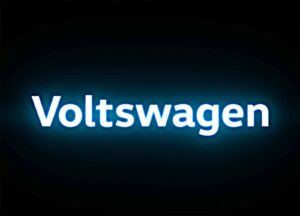 (This story has been updated to reflect official confirmation of the VW brand name change.)

Volkswagen today confirmed plans to change the name of its U.S. brand to “Voltswagen,” a move meant to underscore its massive shift to battery-electric vehicles.

Worldwide, the automaker will spend more than $80 billion to bring at least 50 battery-electric vehicles to market by mid-decade. It’s first long-range BEV, the ID.3 hatchback, launched in Europe last year. The ID.4 SUV, the first model to target the U.S., began rolling into showrooms this past month.

“The idea of a ‘people’s car’ is the very fabric of our being,” said Scott Keogh, president and CEO of Voltswagen of America, referring to the German translation of Volkswagen. “We have said, from the beginning of our shift to an electric future, that we will build EVs for the millions, not just millionaires. This name change signifies a nod to our past as the peoples’ car and our firm belief that our future is in being the peoples’ electric car.”

The name change originally was to be revealed on April 29 but an internal document leaked out early, a senior VW source told TheDetroitBureau.com. The document described the move as “a public declaration of the company’s future-forward investment in e-mobility.”

On Tuesday morning, VW rushed out official confirmation of the plan, though it left some questions unanswered.

Though the U.S. arm of the huge Volkswagen Group is rebranding itself some observers are questioning whether this will be a permanent move. It’s not entirely uncommon for companies to tinker with their names and logos as part of a marketing campaign. The pancake-centric IHOP briefly changed to IHOB several years ago to suggest that it offered a broader breakfast menu.

The name change will not impact VW’s headquarters or, at least for now, operations outside of North America.

The name change is meant to back up the automaker’s attempt to position itself as the world’s leading producer of battery-electric vehicles, or BEVs. Herbert Diess, the CEO of the Volkswagen Group put a target on the back of the auto industry’s current EV leader, Tesla, last year saying he is confident the German giant can “overtake” its American rival before the end of this decade.

A study released by research firm UBS forecast VW could topple its rival as early as 2022. VW is already outselling Tesla in its home market and other parts of Europe. But it lags well behind in the U.S. and China.

“UBS expects that Volkswagen will be a joint world market leader for pure electric vehicles as early as 2022 — with the potential to win market share,” the firm’s study concluded.

Volkswagen only recently introduced its first long-range BEV, the ID.4 SUV, for the States. But it has plenty more coming. That includes a modern take on the classic Volkswagen Microbus that, in concept form, has been dubbed the ID.Buzz.

At launch, the ID.4 is being imported from Germany but production will shift next year to the VW assembly plant in Chattanooga. The factory is undergoing a $1 billion expansion and will add at least one more all-electric model, Keogh confirmed last year. Details have not yet been revealed. The ID.4 and other all-electric products will be assembled at the automaker’s huge Mexican factory complex.

Along with the name change, VW also plans to adopt a unique version of its logo for all-electric models. They will use a light blue background, conventionally powered models sticking with a dark blue background.

The automaker gave the basic logo a makeover in 2019, opting for a less three-dimensional look that, notably, was first used on the new ID.3. That model, which debuted last year, is VW’s first global long-range BEV.

Getting the message out

Volkswagen has had a rocky history in the U.S. market. The company became the nation’s largest import brand during the heyday of the original Beetle. But sales collapsed as Japanese competitors like Toyota, Nissan and Honda gained traction in the 1980s.

Sales are now on the rebound, buoyed by an expanding line-up of SUVs, including the Tiguan and Atlas. The carmaker decided not to bring the ID.3 hatchback to the U.S., meanwhile, betting the SUV-styled ID.4 would better fit with market trends.

While the shift in name to Voltswagen might seem a gimmick, it will fit in with a broader marketing campaign.

“The tone of Voltswagen will be a consistent thread between the branded communications for our growing electric fleet to our gas vehicles,” said Kimberley Gardiner, senior vice president, Voltswagen of America brand marketing. “Over the course of the next few months, you will see the brand transition at all consumer touch points. This is an exciting moment for us, and we have been working through every avenue to make the transition clear, consistent, seamless and fun for all.”

VW won’t ’t be the only manufacturer to tweak its brand identity to mark the emergence of the electric vehicle — nor the first. Mercedes-Benz adopted the Mercedes-EQ badge for its BEVs. Hyundai, meanwhile, is launching an entirely new sub-brand called Ioniq for its electric vehicles.

That said, they will face numerous challenges, among other things convincing American buyers of the benefits of going electric.  They also have to take on the BEV segment leader, Tesla. But sales trends in the U.S. and Europe suggest that may be possible as demand grows and more alternative products reach market.

4 responses to “Update: VW Plugs in a New Name: “Voltswagen””