Tom Libby, associate director, automotive industry analysis, IHS Markit, said Tesla delivered 24,237 new cars and crossovers in the U.S. in January, the most of any of the 16 luxury brands selling vehicles here.

The total represented was a 10% improvement compared with the year-ago period. It also blew away the results of the rest of the luxury market, which posted a 3% decline. The results put it just ahead of Mercedes-Benz with Lexus in third.

Brand’s been there before

Despite Tesla’s relatively recent entry into the luxury market, according to IHS’ analysis, it is not the first time Tesla has reached the top of the luxury segment. Tesla also ranked number one in January 2019 and posted a third-place finish in January 2020.

While Tesla currently markets four models in the United States, its climb to the top of the luxury sales charts has been driven in large part by the success of the Model 3 and Model Y.

“Many consumers perceive Tesla as a leading-edge, high tech, environmentally progressive brand driven by a charismatic leader who not only builds cars and crossovers, but also sends rockets into space and is a global industrial visionary. That combination is hard to beat and has gotten the attention of the entire global auto industry,” Libby noted.

Tesla sales are translating into buyer loyalty, according to IHS. Tesla achieved highest honors in the company’s annual survey of owner loyalty. With a loyalty rate of 55%, due in part to its BEV-exclusive line-up compared with other brands boasting more diverse fuel type offerings, it topped the Alternative Powertrain Loyalty category in the IHS Markit 25th annual Automotive Loyalty Awards. 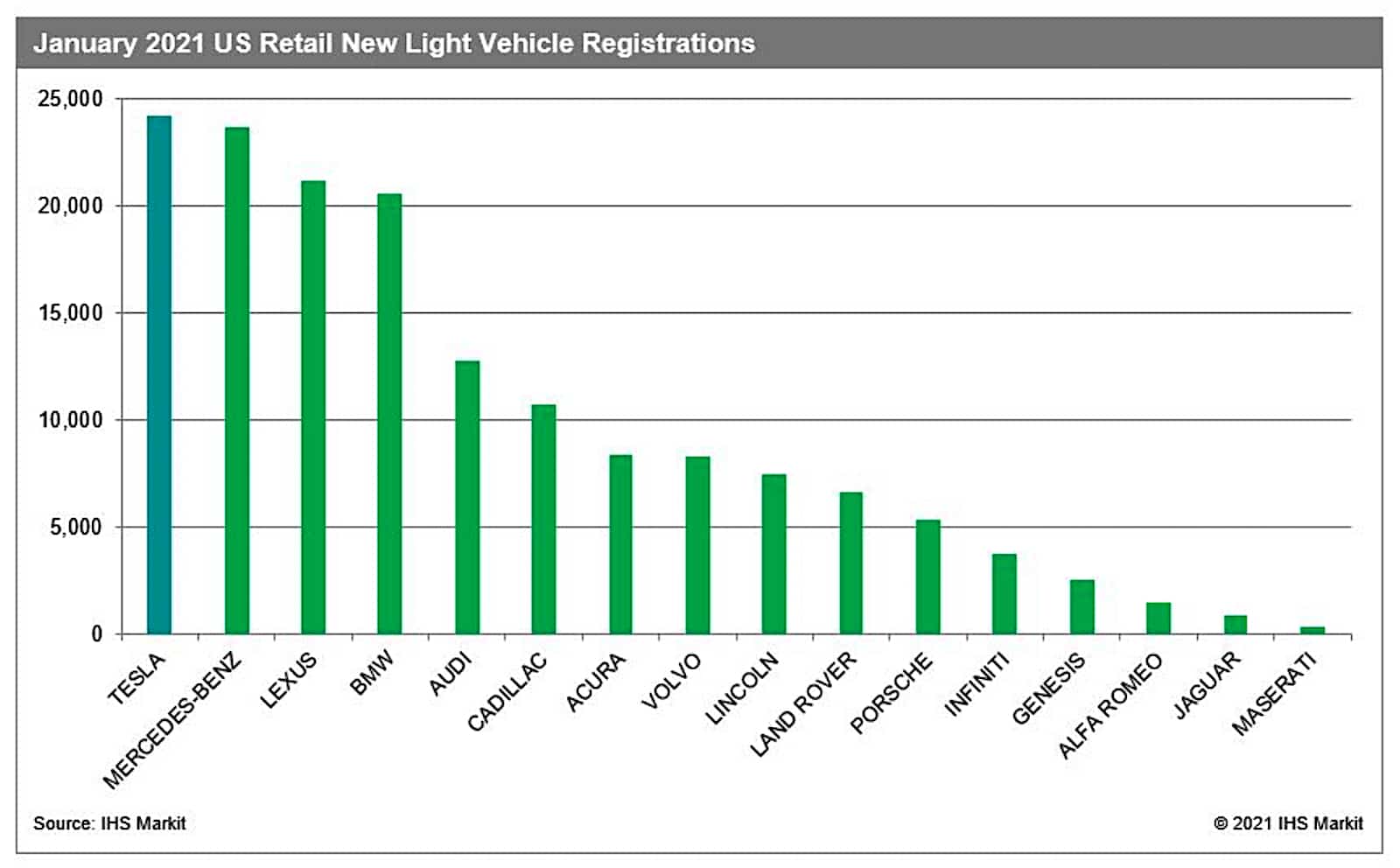 General Motors was the top manufacturer for automotive loyalty in the U.S. in 2020, according to IHS. It was the sixth consecutive win for GM in the “Overall Loyalty to Manufacturer” category and 17th in the last 25 years.

GM’s 69% retention of its customers was led by its popular utility and pickup line-up, with 93% of returning owners purchasing another GM utility vehicle or pickup truck in 2020. Ford’s leadership in pickups contributed to a retention rate of 63 percent.

“Our 25 years of experience in analyzing automotive loyalty shows it is an important influencer of market share as the opportunity for sales growth continues to contract,” said Joe LaFeir, senior vice president and Automotive business line leader, IHS Markit.

“In such a competitive environment, OEMs have been diligent in their strategic marketing efforts, and it’s clear these initiatives have been a core focus for this year’s winners.”