Pedestrian Deaths Jump in First Half of 2020

Latest stats show jump despite few drivers on the road.

Walking has become a more deadly enterprise in many states, as the U.S. pedestrian fatality rate rose 20% in the first six months of 2020.

Speeding, distracted and impaired driving, and other dangerous driving behaviors increased during the COVID-19 pandemic leading to the rise in deaths, according to a new report issued by the Governors Highway Safety Association (GHSA). The numbers mirror the number of driving fatalities in 2020.

GHSA’s annual Spotlight on Highway Safety offers the first comprehensive look at state and national trends in 2020 pedestrian traffic deaths, based on preliminary data provided by State Highway Safety Offices in all 50 states and the District of Columbia.

The analysis found that from January through June 2020, 2,957 pedestrians were killed in motor vehicle crashes – six more than during the same period in 2019. 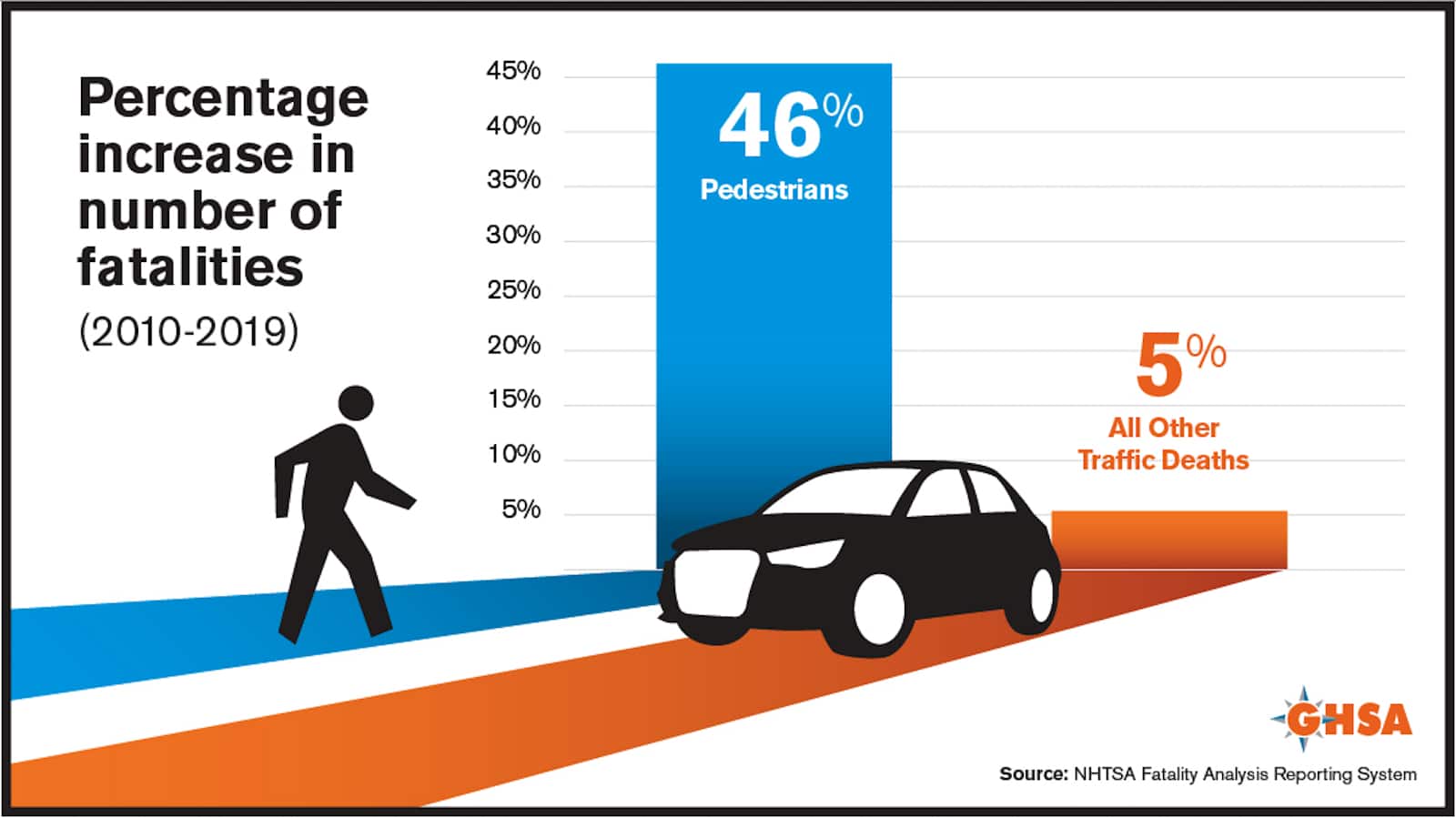 Factoring in a 16.5% reduction in vehicle miles traveled (VMT) nationwide, the rate of drivers striking and killing pedestrians jumped to 2.2 deaths per billion VMT, a significant and unsettling increase from 1.8 deaths the year before, said GHSA spokesman Adam Snider.

The news wasn’t all bad. The GHSA the report identifies progress in some state-reported data. For example, 20 states and D.C. saw declines in the number of pedestrians killed by drivers for the first half of 2020 compared to 2019.

Pam Shadel Fischer, senior director of External Engagement for GHSA, said that the organization was surprised to find out that pedestrian deaths were actually going up in many states despite the fact that people were driving less.

“It was absolutely a surprise to see pedestrian death rates go up in some states during the pandemic,” Fischer said. “When governors started issuing the stay-at-home orders, we really thought we would see death numbers drop.

“But all of the sudden we were hearing that in many places the numbers were actually going up. When we consulted with state agencies, many of them confirmed what we had been hearing. We then talked with the folks at NHTSA and were flabbergasted to see the figures we saw.”

Fischer called all of this “very frustrating” because the rates should have gone down when the number of miles being driven declined. 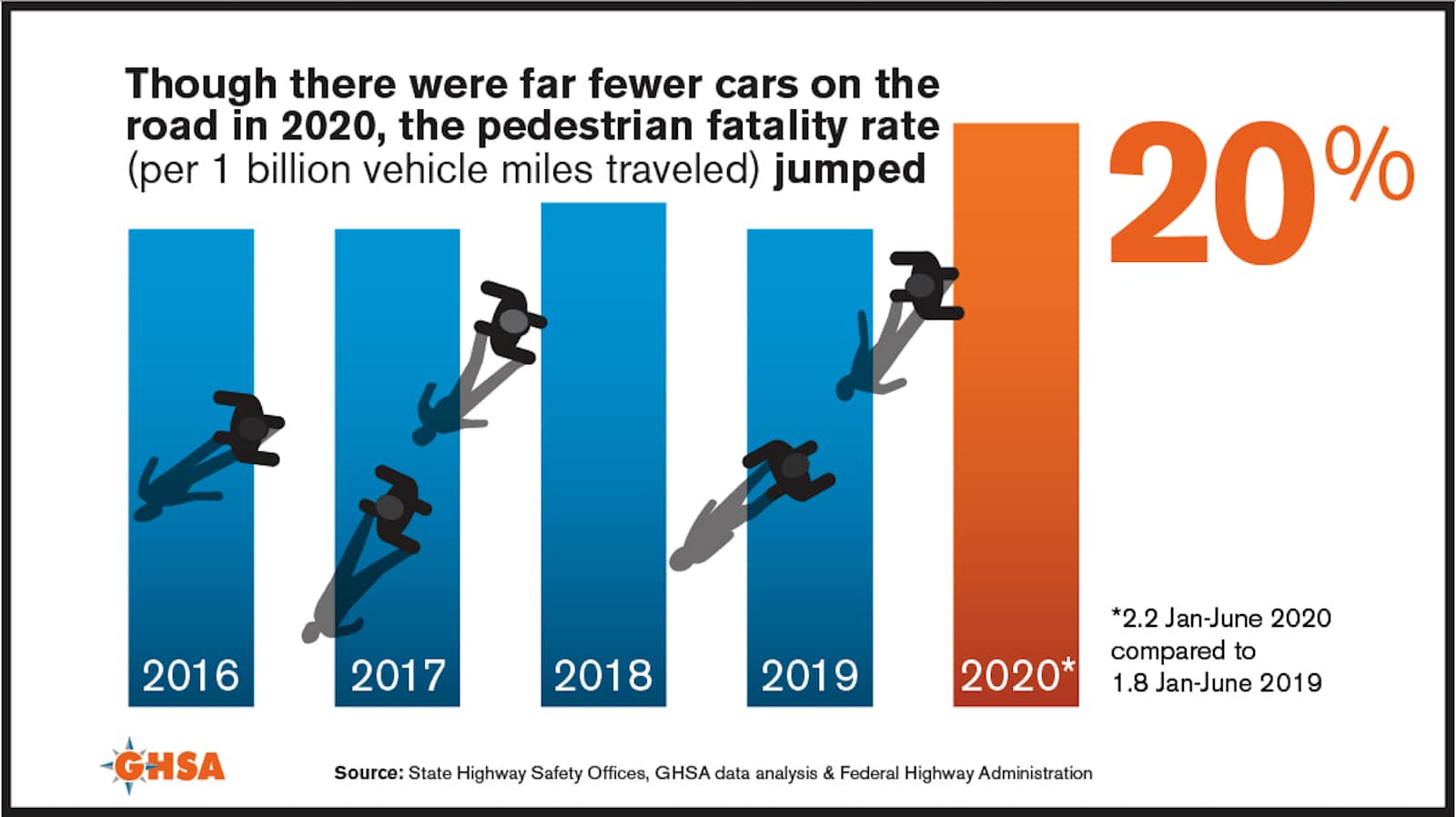 Fischer said that the GHSA believes a number of factors have resulted in these fatalities, including a jump in number of people driving while impaired, police tell the organization. Additionally, with fewer vehicles on the road, drivers have been driving faster.

“We have seen numbers from police indicating that a lot of people have been speeding,” Fischer said. “And I am not just talking about on highways. I am talking about city streets and residential neighborhoods. And we’ve talked with people who monitor automatic enforcement systems and they’re telling us that a lot of people are running red lights.”

As light truck and SUV sales continue to climb, the likelihood increases of pedestrians being struck by a larger and more dangerous vehicle.

“People in these types of vehicles have a lot of protection,” Fischer said. “But pedestrians have no protection. So when they are hit by heavy SUV at a high rate of speed, the injuries are going to be far worse, causing more fatalities.” 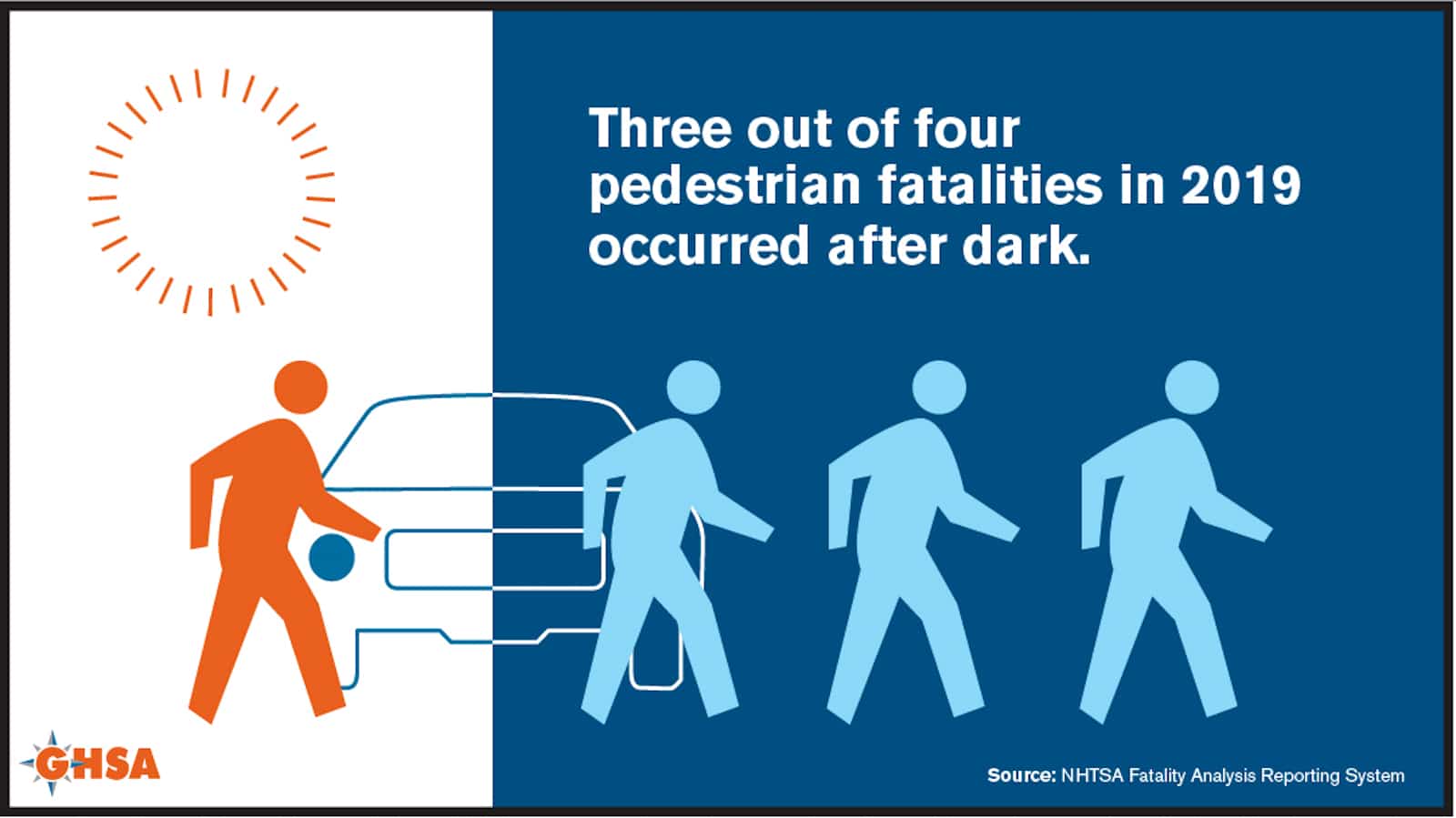 GHSA’s message to drivers is that they are sharing the roads, Fischer said. Right now a lot of people are walking more because they just want to get out of the house. Drivers have to remember that. And pedestrians have to do their part, which includes crossing streets at the designated cross walks.

Most pedestrians are killed on local roads, in the dark and away from intersections, suggesting the need for safer road crossings and increased efforts to make pedestrians more visible through improved lighting and other countermeasures.

During the past 10 years, the number of drivers striking and killing a pedestrian after dark increased by 54%, compared to a 16% rise in pedestrian fatalities in daylight.

“Everyone has to do their part if we want to get these numbers down,” Fischer said. “Education and enforcement can play a big role in reducing pedestrian deaths.”

0 responses to “Pedestrian Deaths Jump in First Half of 2020”