Mercedes-AMG, the performance arm of the German luxury brand, plans to roll out an assortment of new hybrid and all-electric models.

The electrified high-performance line-up will “benefit” from AMG’s “close cooperation with Formula 1,” the automaker said today. That alliance is already being used to develop the Project One hypercar, with additional electrified street-legal models debuting later this year, according to Mercedes.

“With our new drive strategy, we are transporting our hallmark DNA into an electrified future,” said Philipp Schiemer, chairman of the Board of Management of Mercedes-AMG GmbH.

“We are thus opening ourselves up to new target groups who can experience Mercedes-AMG as the Performance Luxury brand of the 21st century,” he added in an announcement of the new program released today.

There will be two “pillars” to the program, according to AMG officials:

E-Performance models will adopt a layout using a gasoline engine to power just the front axle, according to AMG. The rear axle, in turn, will derive power from and electric driver unit.

There are several benefits to this approach, the automaker claims, including optimized weight balance and all-wheel drive, as well as the instantaneous torque that electric motors develop. That eliminates traditional torque lag associated with turbochargers.

“Added to this is the High Performance Battery we developed, which boasts twice the power density of conventional drive batteries and, like many other components, is inspired by technology from Formula 1,” said Jochen Hermann, chief technical officer of Mercedes-AMG GmbH.

A burst of power

The F1 series was among the first to adopt hybrid drive technology. Several manufacturers, including Mercedes and Aston Martin, have been working to use its approach in street-legal products.

Depending upon the individual model, AMG will use rear-mounted electric motors capable of producing a continuous 94 horsepower — with short bursts of up to 201 hp and 236 pound-feet of torque. Unlike most electrified drivetrains, however, the motor is paired with a two-speed transmission that shits into second at around 87 mph — when the motors spin up to 13,500 rpm.

Power is directed through an electronically controlled rear differential. That allows for virtually instantaneous torque vectoring, among other things, to enhance the vehicle’s cornering capabilities.

The batteries developed by AMG are specifically targeted at high-performance applications, such as Formula One, according to the automaker. They have an extremely high energy density, meaning power can rapidly be sent to the motors – and just as quickly recharged using regenerative braking. They do create some challenges, however, including the need for precise temperature control. AMG said it has developed its own direct cooling system to maintain idle operating conditions.

As with existing AMG products, E-Performance models will give a driver extensive control with six programmable mode settings; “Electric”, “Comfort”, “Sport”, “Sport+”, “RACE” and “Individual.” But they will be “precisely tailored” for the unique attributes of the hybrid drivetrain.

Among other things, a driver will be able to choose from various brake regeneration settings. In more aggressive modes that will allow one-pedal driving where simply backing off on the throttle will quickly slow the vehicle down — say when entering a hard turn.

Several different E-Performance powertrains are under development. One, using an AMG V-8, will deliver more than 804 hp and 738 lb-ft combining the gas and electric drive components. “Depending on the future vehicle, this enables acceleration from 0 to 60 mph in less than 3.0 seconds,” said AMG.

Another system will pair a 2.0-liter 4-cylinder engine with an electric exhaust gas turbocharger. Lifted almost whole from F1, it eliminates the normal turbolag when a driver stomps on the throttle and then waits for exhaust pressure to build up and then spin the turbo’s fan blades. The four-cylinder system will be able to deliver up to 442 hp from the gas engine, another 201 hp coming from the rear electric motor.

As for all-electric vehicles, AMG said it is already working its magic on some of the new Mercedes-EQ models. They will get tweaks to their drivetrain, batteries, chassis and both exterior and interior design. AMG also plans to develop unique soundscapes to replace the familiar sound of its gas engines.

For the moment, AMG isn’t revealing which EQ models it is working on but it did offer a sense of what to expect: 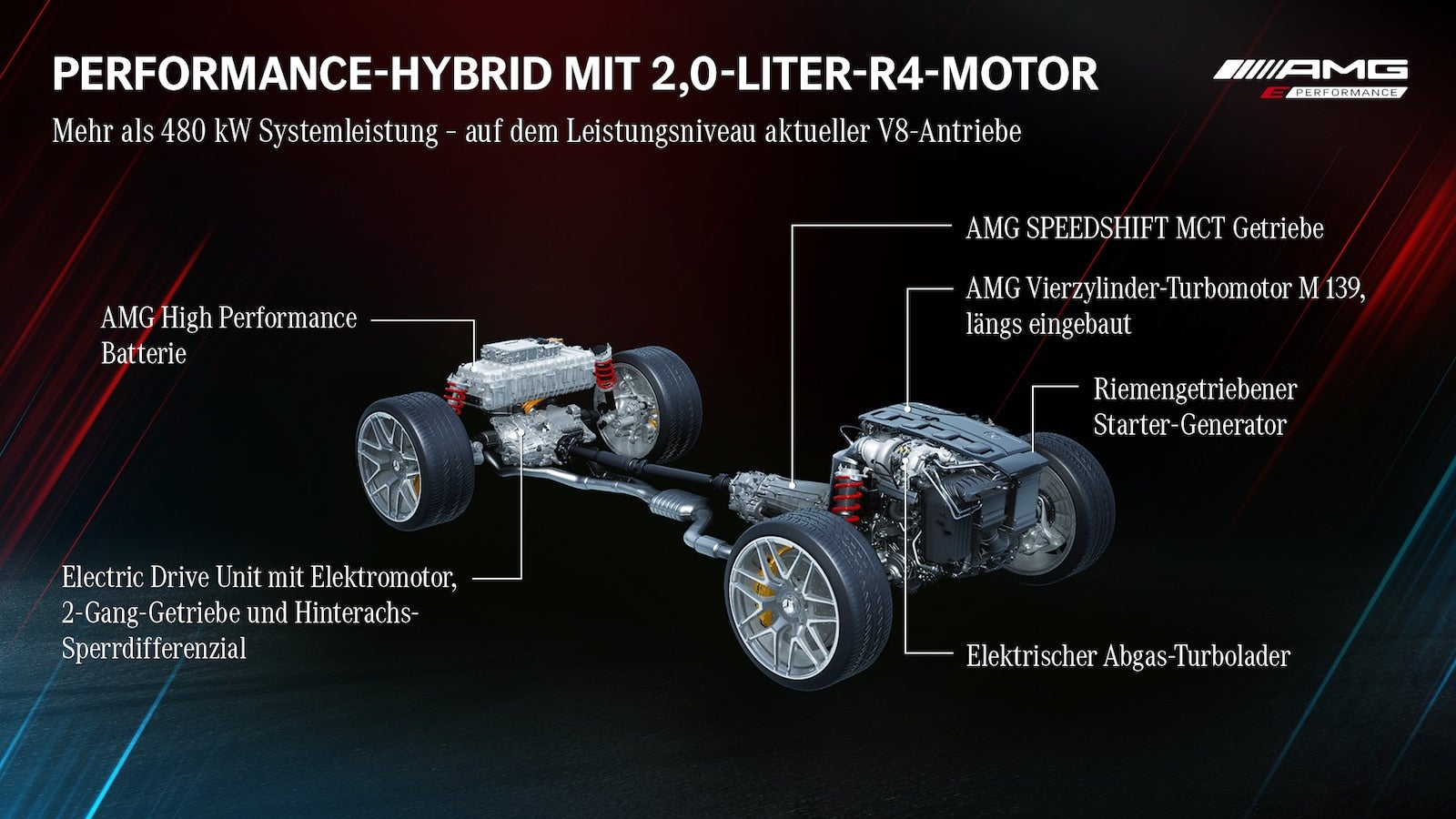 nation of front and rear engine, overall performance can be achieved on a par with the most powerful Mercedes-AMG Performance models with the current 4.0L V8 biturbo engine. This also applies to the sprint from standstill to 60 mph, which is completed in well under 4.0 seconds, depending on the power and vehicle. The electric motors rev up to a maximum of 18,000 rpm and enable a top speed of up to 155 mph.”

For now, AMG isn’t offering specific details on which electrified products are in the works, nor when they will reach showrooms. But it did promise that more details will be released later this year.