Automakers like to press any advantage they can when it comes to currying favor with current and potential customers. Good deals and big rebates appeal to the bottom line. However, how “American” a vehicle or a company is often tugs at the heart and purse strings.

If so, Ford seemingly has the market cornered on America, especially since it produced more than 1.7 million vehicles in the U.S. in 2020, nearly 190,000 more than the next closest automaker, according to IHS Markit’s 2020 light vehicle production and sales data. IHS Markit declined to reveal the numbers for other U.S. producers to TheDetroitBureau.com.

“The numbers confirm Ford’s leadership and commitment to American manufacturing and the U.S. economy. Not only is the auto industry the backbone of the U.S. economy, Ford is vital to it,” said Kumar Galhotra, president, the Americas and International Markets Group. “We are a proud supporter of American manufacturing – and we do back it up year after year, investing in our workforce and the country.”

The data shows, and Ford confirms, more than 82% of all vehicles the company sells in the U.S. are assembled here, which is also more than any other “full-line” automaker. That’s an increase of 7% from 2019. 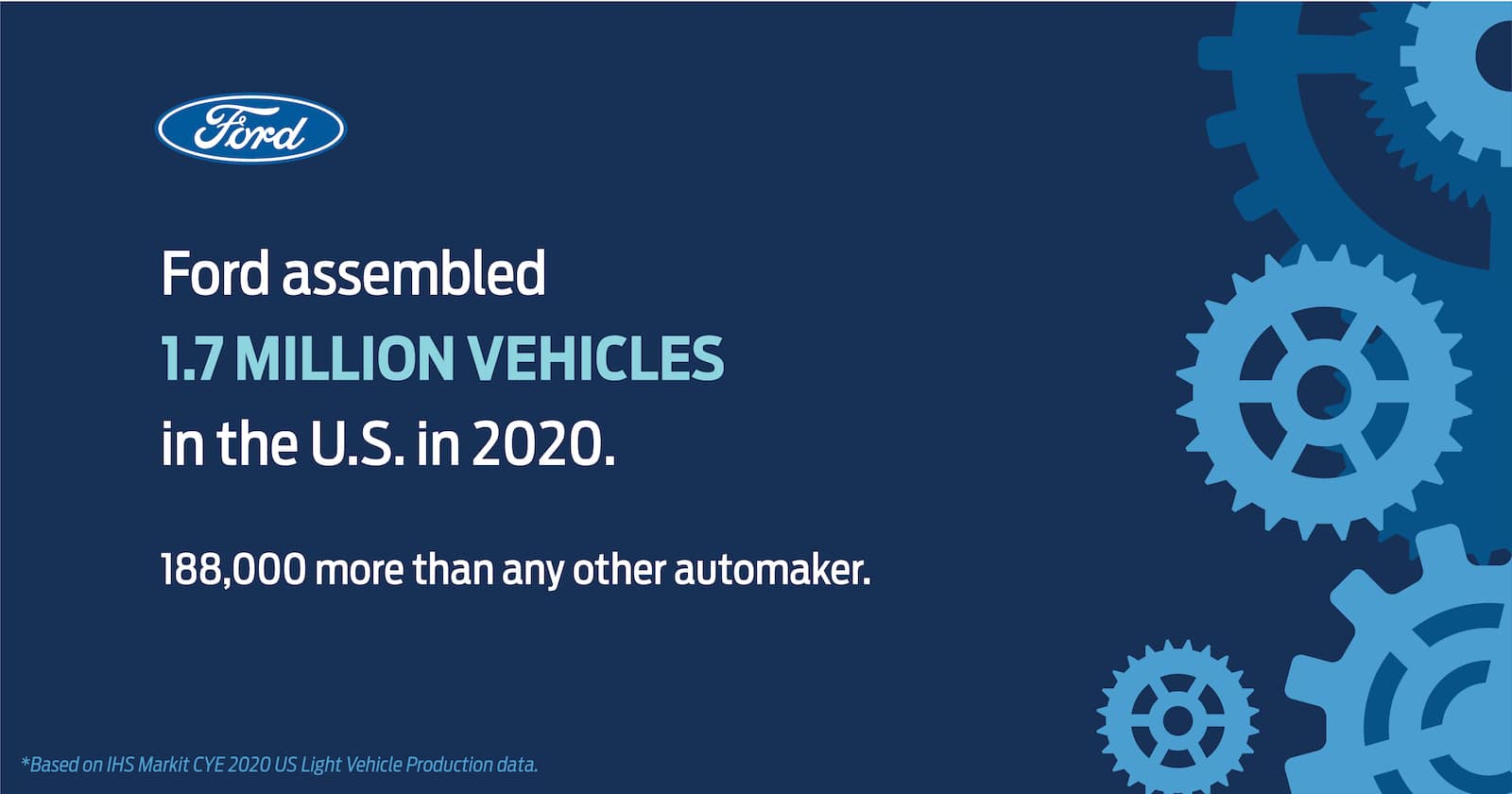 Not only does it sell more in the U.S., it also exports more from here, shipping more than 280,000 vehicles to other countries, including the Ford Mustang, which is now available in scores of countries it wasn’t available before, including China.

The company notes that one out of every six vehicles is exported. In addition to selling a greater percentage and building more of its vehicles in the U.S., that “more” translates to its workforce.

According to Ford, the Dearborn, Michigan-based automaker employs more UAW workers — more than 57,000 — than any other automaker. The company’s committed $2 billion in new investments since 2019, including adding 3,000 new jobs.

Some of that investment came to the fore in 2020, despite the COVID-19 pandemic. The automaker launched three new vehicles in 2020: the Bronco, F-150 pickup and the company’s first long-range all-electric model, the Mustang Mach-E. 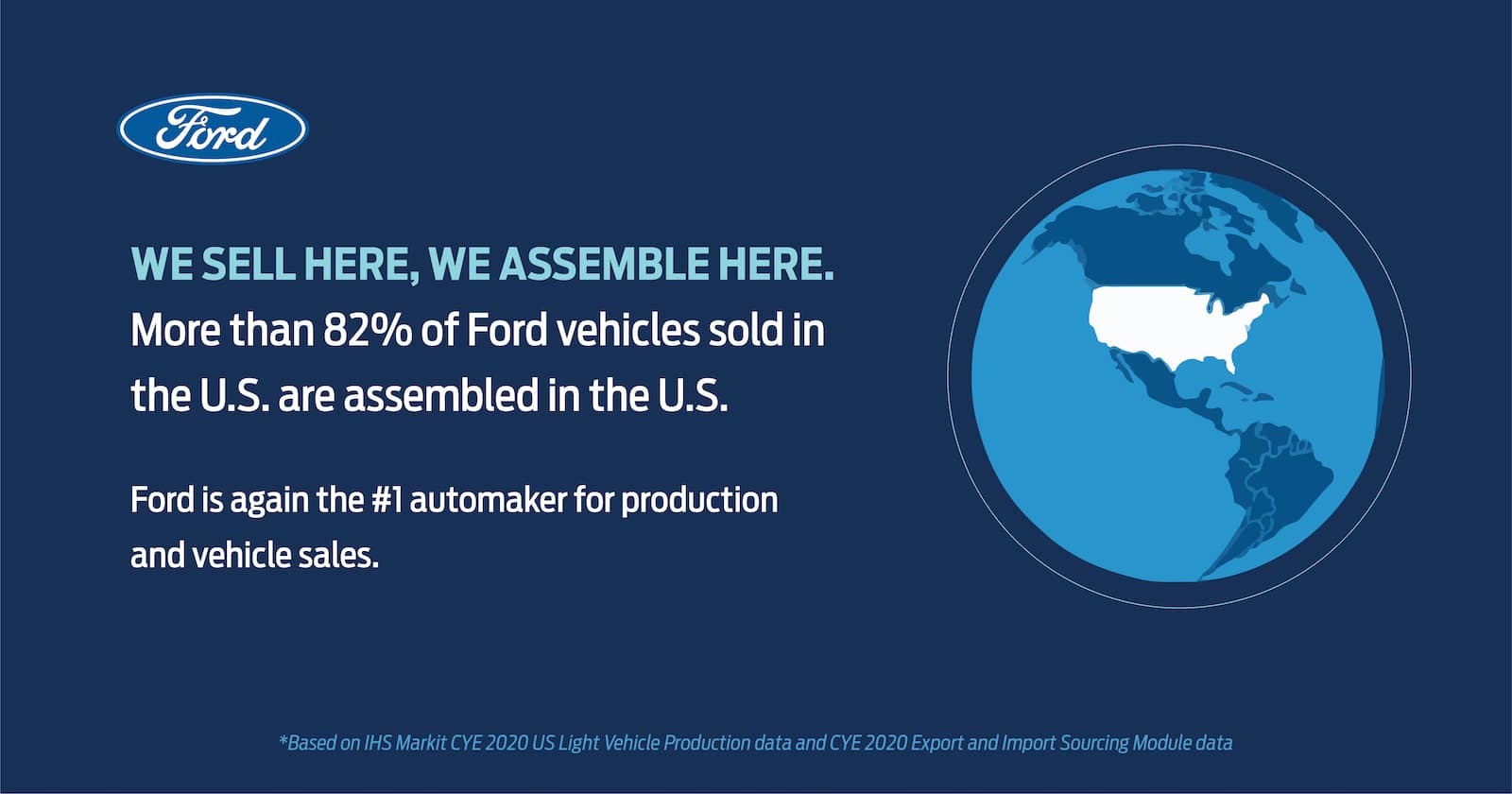 The Mach-E is part of a larger plan to shift the company’s offerings to electric powerplants. In addition to the new Mach-E, the company added a new all-electric Transit van offering. It invested $400 million in new investment, including the addition of 150 new jobs to try to retain its sales leadership in the commercial van segment.

In recent years, Ford — as well as General Motors — endured some abuse in the public spotlight about its product plans. However, the two companies have proven to be significant generators of jobs and income in the U.S.

A Boston Consulting Group Study from 2020 revealed Ford accounts for one of every five vehicles built in the U.S. The company supports 1 million American jobs with as many as 14 ancillary jobs coming from each singular Ford job — for just the Ford F-Series pickup. Ford creates nearly 12 jobs for each Ford employee it employs.

Ford contributes approximately $100 billion to the U.S. GDP and the best-selling F-Series contributes nearly $50 billion. The F-Series has been the top-selling full-size pickup truck in the U.S. for nearly four consecutive decades. The F-Series, according to the study, generates more revenue than McDonalds U.S., Nike, Coca-Cola, Visa and Netflix.