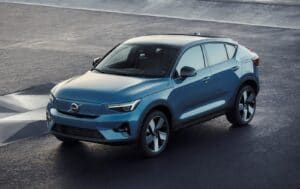 Volvo’s rolled out its second battery-electric model, the C40 Recharge.

Volvo is plugging into the battery-car market in a big way, and it takes its next step in the process of eliminating all forms of gas and diesel power with the launch of its second EV, the C40 Recharge.

The coupe-crossover styling of the C40 is “lower and sleeker” than that of the automaker’s first all-electric model, the XC40 Recharge launched last year as a 2021 model. But they have plenty in common, starting with the underlying CMA platform that eventually will serve as the foundation for a fleet of Volvo battery-electric vehicles.

“The C40 Recharge represents the future of Volvo and shows where we are going,” said Henrik Green, chief technology officer. “It is fully electric, offered online only with a convenient care package and will be available for quick delivery. Getting a new Volvo was never this attractive.” 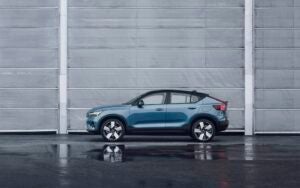 The 2022 Volvo C40 Recharge is being produced in Ghent, Belgium, like the XC40 Recharge.

The second battery car borrows features a similar high seating position as first seen in the XC40, but there are a number of key differences, starting up front with the familiar Thor’s Hammer LED headlamps that adopt what Volvo describes as “state-of-the-art” pixel technology.

The grille is largely closed since the electric drivetrain doesn’t need as much air for cooling as an internal combustion engine.

In markets where legally permissible, this allows the headlamps to always operate in bright mode. But individual pixels are automatically dimmed to avoid blinding pedestrians and oncoming traffic.

A close look reveals the A-pillar slopes more aggressively than with the XC40. The more curvaceous roofline flows into an integrated spoiler and a unique rear end on the C40 Recharge. 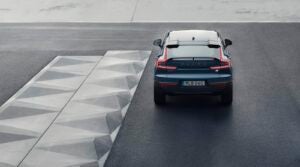 Volvo’s new C40 will be sold, in part, online in the U.S. as the company shifts to a new sales strategy.

The overall design, notes Haslem, “says there’s something different about the car without screaming ‘I’m electric.’”

The interior, meanwhile, picks up the basic layout of the XC40 Recharge, with a fully digital and reconfigurable 12.3-inch gauge cluster and a portrait-oriented touchscreen handling infotainment duties. The latest version of the Volvo system was developed in partnership with Google and runs the new Android automotive operating system. It introduces features including Google Maps and Google Assistant.

The voice assistant will make it “much easier” than the original Volvo voice control technology to do things like adjusting vehicle temperature or setting a destination, according to Haslem. “It’s not distracting,” since it doesn’t require recalling very precise verbal commands. 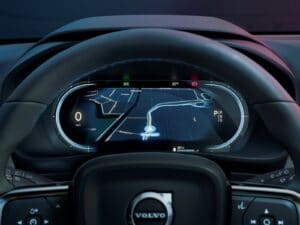 The new C40 Recharge is designed to handle over-the-air updates to facilitate improvements.

One of the important developments will be the introduction of smartphone-style over-the-air updates that allow Volvo to fix or upgrade various vehicle systems by tweaking the software after the car leaves the factory.

In keeping with the sustainability of the electric drivetrain, Volvo won’t offer a leather interior package though it will offer a simulated alternative.

The C40 Recharge rides on the modular CMA platform and shares the same underlying drivetrain as the XC40 Recharge. It pairs two motors, one on each axle, to produce 402 horsepower. But what might be the more important figure is the 486 pound-feet of torque they produce. With a single-speed transmission, power comes on all but instantaneously. Torque is equally split between front and rear, creating a through-the-road all-wheel-drive system. Volvo says the C40 Recharge will be able to launch from 0 to 60 mph in about 4.7 seconds.

The new battery-electric vehicle carries a 78 kilowatt-hour lithium-ion battery pack that Volvo expects to deliver 420 kilometers, or about 262 miles, of range. That figure uses the European WLTP test cycle and should drop closer to 200 miles when tested by the U.S. EPA, however.

As for charging, Volvo says the pack can be fast-charged to 80% in as little as 40 minutes. Though specific details were not revealed, it appears that would rely on using one of the newer 150 kW public chargers. As with the XC40 model, the C40 Recharge pack can be fully topped off using an 11 kilowatt onboard charger that, with a 240-volt power supply will top you off in just eight hours. 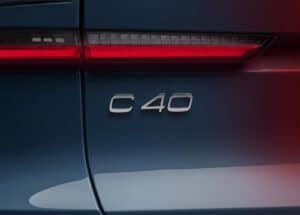 Significantly, Volvo plans to switch to an entirely online sales strategy for the C40 Recharge – an approach it plans to migrate to for all future products. The specific process is still being finalized and will vary from state to state due to local franchise laws. The approach is not meant to eliminate the current retail system, however, U.S. CEO Anders Gustafsson stressed during an online briefing. They will participate in the sale process and vehicle delivery.

Dealers will have only a modest level of inventory on their lots, Gustafsson added, but the automaker will maintain its own stock regionally to minimize delivery times.

Volvo also plans to switch from offering a broad array of standalone options to a handful of packages.

Production of the C40 Recharge will be handled by the Volvo plant in Ghent, Belgium already handling the conventionally powered 40-Series. Volvo begins taking advance orders immediately. It hasn’t set a hard date for a U.S. sales launch, though Haslem said “early next year is probably a good prediction.”