Automaker will use Azure to run and update its self-driving platform.

Microsoft’s influence in the auto industry grew a little more Thursday through an expansion of its partnership with Volkswagen.

The two are partnering up to accelerate the development of the German automaker’s autonomous vehicle efforts. Volkswagen’s Car.Software organization is teaming with the tech giant to create a cloud-based automated driving system.

It’s the latest link between the two companies, after VW inked a deal in 2018 to use Microsoft Azure, which will now become an integral part of the system. Using Azure to run the Automated Driving Platform offers VW an easy way to continue its development.

The first vehicles using the new technology will begin testing later this year. Production of the new system expected launch at some point during 2022, officials said.

Growing influence in the auto industry 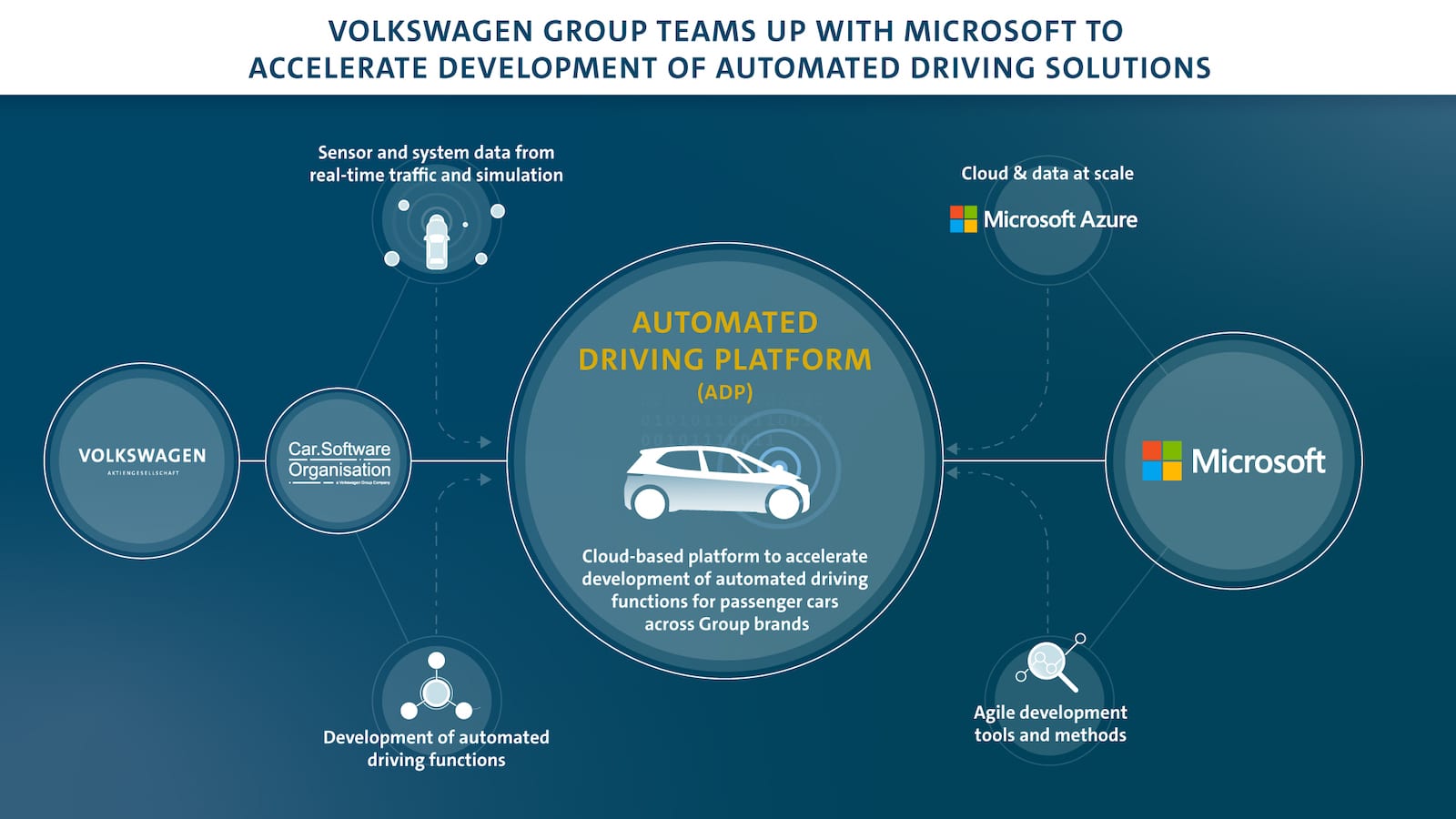 The trio will join forces to merge their software and hardware engineering. They’ll also share manufacturing knowledge and cloud computing expertise in an effort to make an impact on mobility.

San Francisco-based Cruise will use Microsoft’s cloud computing platform Azure to “commercialize its unique autonomous vehicle solutions at scale,” meaning that Cruise will use the service to help manage its self-driving fleet as it moves from the testing phase into acting as ride-hailing service.

“As we transform Volkswagen Group into a digital mobility provider, we are looking to continuously increase the efficiency of our software development,” said Dirk Hilgenberg, CEO of the Car.Software Organization.

“We are building the Automated Driving Platform with Microsoft to simplify our developers’ work through one scalable and data-based engineering environment,” he said. “By combining our comprehensive expertise in the development of connected driving solutions with Microsoft’s cloud and software engineering know-how, we will accelerate the delivery of safe and comfortable mobility services.”

Initially, the set up will aid in improving the efficiency of updating VW’s advanced driver assistance systems. These typically include safety tech like crash avoidance or mitigation or stability control. However, the new partnership is just the beginning of the automaker’s development plans – and investment in them.

Oft-cited as a benefit for autonomous driving, the pair say the collaboration will improve safety and ease congestion. Azure is designed to handle the petabytes of data that will be input into the system. This information ranges from road conditions to weather to pedestrian traffic. It will be able to help the autonomous system learn more efficiently, officials noted.

Volkswagen Group is driving forward the digitalization of the car rapidly. By 2025, it will invest more than $32.5 billion in digitalization, aiming to grow the proportion of in-house development of software in the car to 60% from 10% currently.