The reliability of today’s vehicles has hit an all-time high, according to a new by J.D. Power.

Manufacturers are making major strides in all categories, Power’s latest Vehicle Dependability Study indicates, including the issues with onboard infotainment that have plagued many recent models. The study, based on a survey of thousands of owners focused on vehicles in service for three years.

Those vehicles “are of higher quality and more dependable than in previous years,” said Dave Sargent, vice president of global automotive operations at J.D. Power. “Most owners aren’t experiencing their vehicles breaking down or falling apart.”

That said, Sargent tempered the good news by noting that “there are still some problem areas that need to be addressed and some warning signs on the horizon,” with an emphasis on the various technologies that are becoming increasingly commonplace on today’s vehicles.

On the whole, the vehicles covered by the 2021 Vehicle 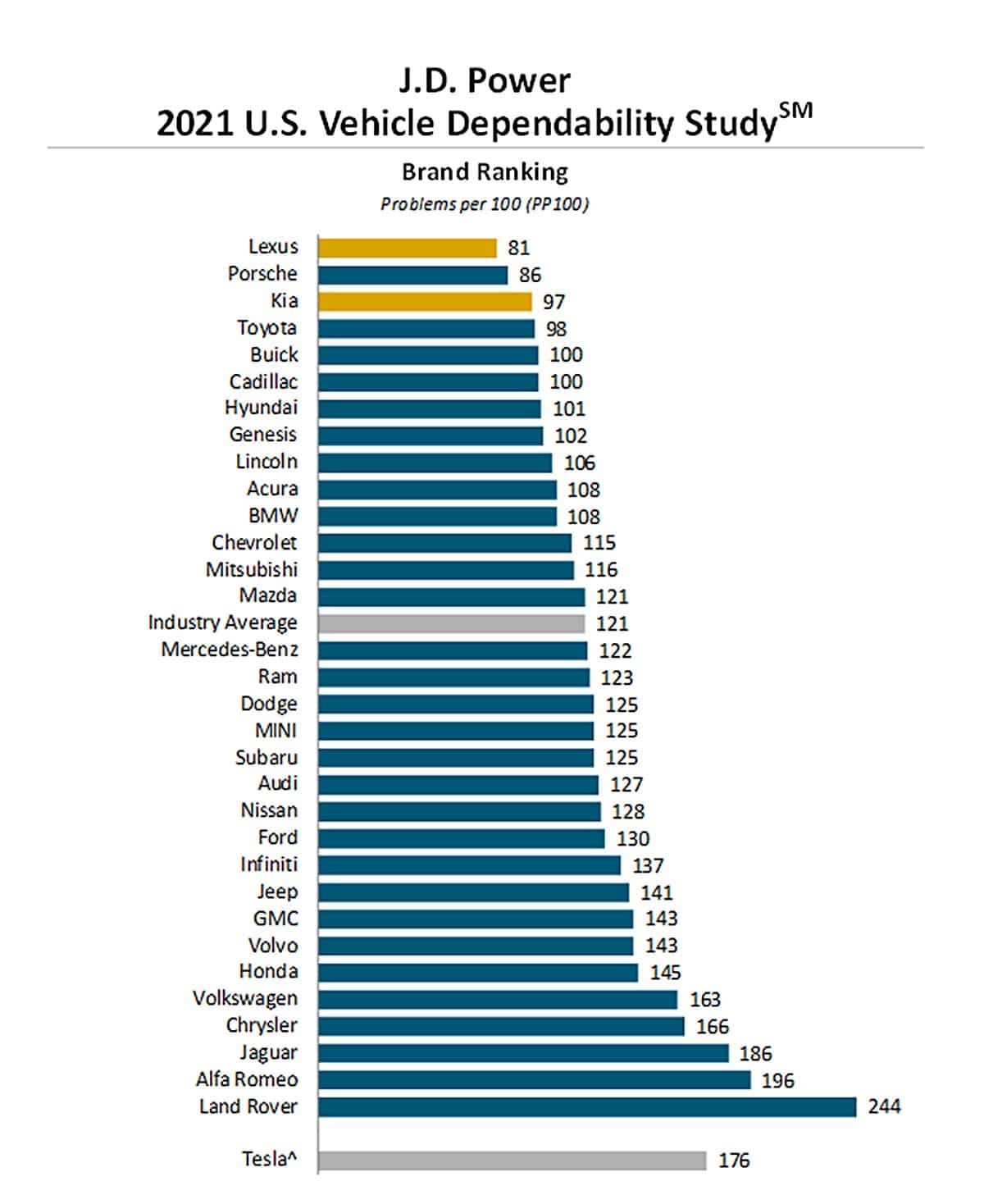 Dependability Study had fewer problems than in any previous year since the VDS was launched 32 years ago. In Power-speak, they averaged 121 problems per 100, or 121 PP100. That references the number of issues owners reported for every 100 vehicles. By comparison, the industry average just a year ago was 134 PP100.

Lexus, a perennial leader, topped the 2021 study with an average of just 81 complaints for every 100 vehicles, an all-time record. Porsche followed with a score of 86, Kia coming in third at 97 PP100. Toyota was fourth, at 98.

Buick and Cadillac tied as the top-ranked domestic brands, with 100 PP100 scores. Lincoln was the only other Detroit automaker to make the Top 10, at 106 pp100.

At the bottom end, Land Rover had the industry-worst score of 244 problems per 100 vehicles with, in ascending order, Alfa Romeo, Jaguar, Chrysler and Volkswagen rounding out the bottom five. Tesla would have been in that dubious group with a score of 176 but Power noted that the automaker does not cooperate with its research so data isn’t available for vehicles sold in a number of states.

On the whole, Asian vehicles experienced the least amount of trouble, with a collective score of 115 PP100. Significantly, the Koreans – Kia, Hyundai and Genesis – outperformed the Japanese overall, noted Power.

The most reliable vehicles

In terms of individual models, the Porsche 911 was rated the Most Dependable Model overall.

In various product segments, Toyota and its Lexus brand led in four of 11 categories, including the Tundra, rated the best Large Light Duty Pickup, and the Lexus ES ranked the best Compact Premium Car. Chevrolet was the only other brand to top multiple categories with its Camaro the best Midsize Sporty Car and Silverado HD rated the most reliable Large Heavy Duty Pickup. 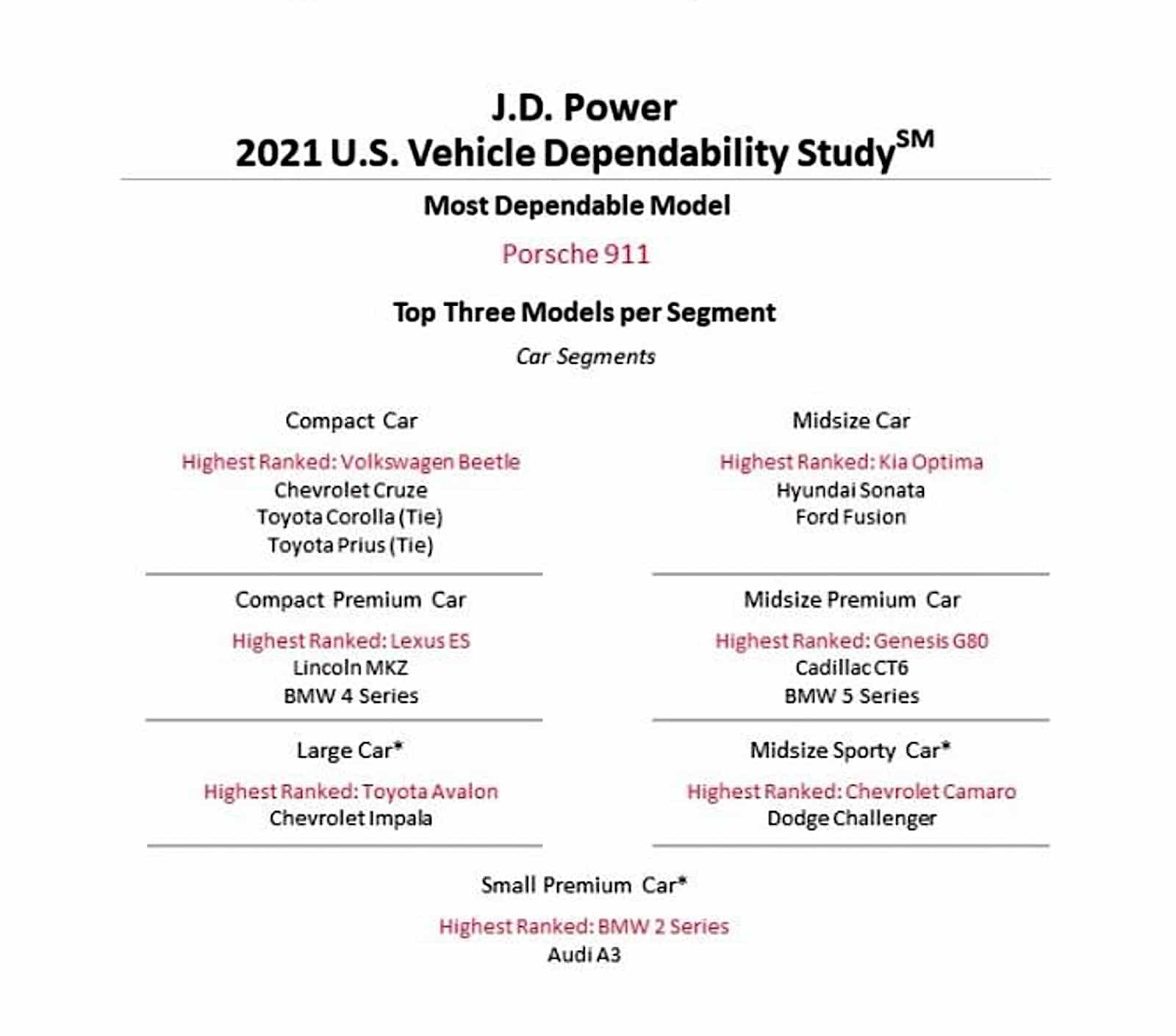 ain, exterior, interior and seating, there were some trouble spots. There were only “marginal improvements” with high-tech features like navigation and touchscreen displays, Power noted in a news release.

Electronic issues continue to cause grief

“From early in the ownership experience, many owners complain about these systems being problematic,” Sargent said. “It’s a recurring theme. With smartphone apps increasingly giving owners an alternative, some will give up on the vehicle’s built-in systems that caused that initial frustration. That’s problematic for automakers, as a lot of the vehicle’s value is tied up in these systems and they don’t want to hand this business over to third parties.”

The 2021 Vehicle Dependability Study was released Thursday at precisely the same time as the annual Top Picks and Best Brands studies conducted by Consumer Reports. There was plenty of common ground. Many of the same brands ranked at the top, including Porsche, and at the bottom, including Land Rover and Alfa Romeo.

But there were some sharp conflicts, as well. Mazda was the number one for CR, but 14th on the VDS, barely above industry average.

Both studies found Buick surging to the top tier but where Chrysler moved into the upper ranks, according to Consumer Reports, it ranked fourth from the bottom in the Power VDS. 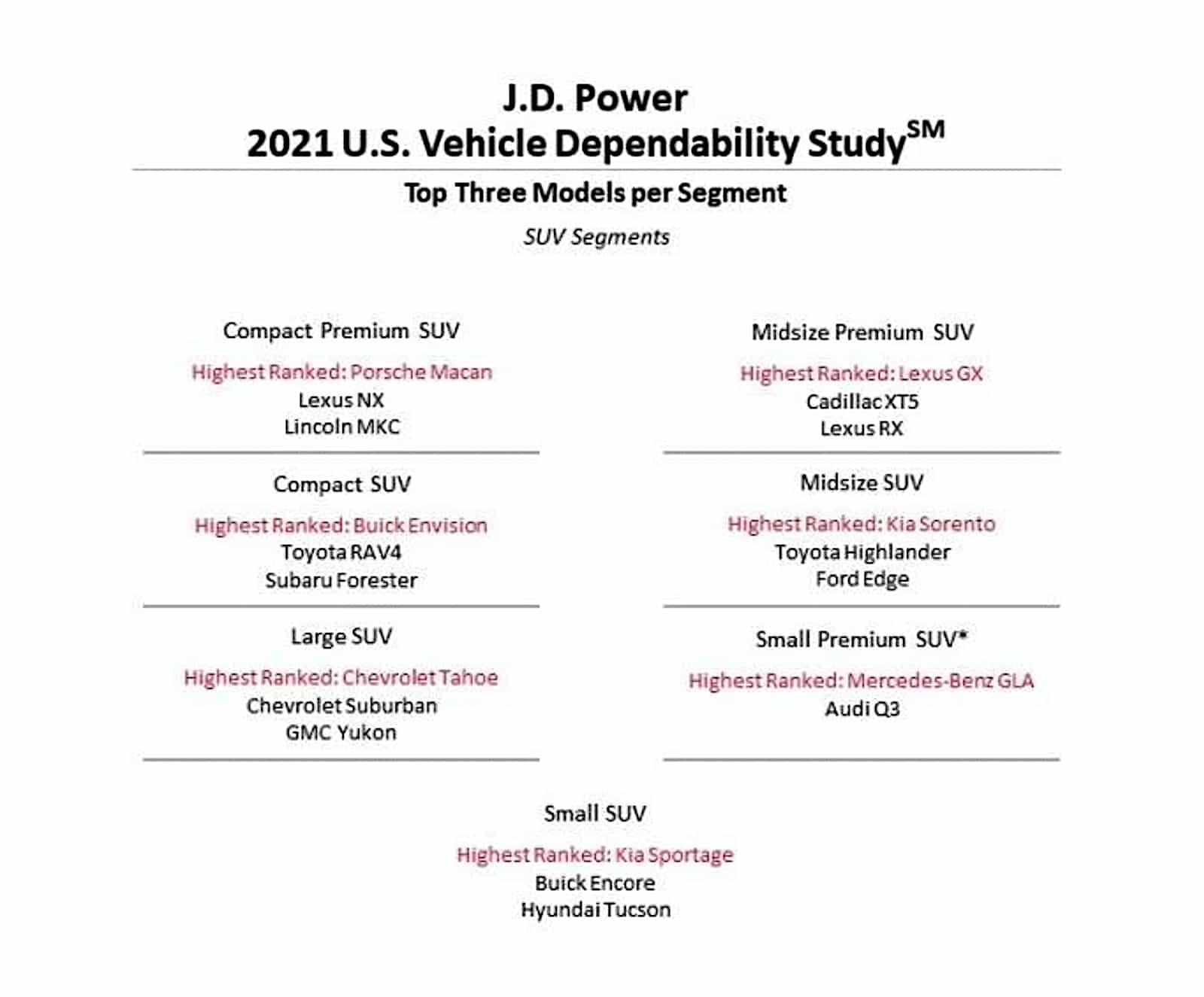 That underscores the different metrics used in the two studies. Power’s Vehicle Dependability Study was based on responses from 33,251 original owners of 2018 model-year vehicles after three years of ownership.

Consumer Reports’ new studies were based on an even larger sample of its own readers. And while quality and reliability are important factors, the influential organization also worked in results of its own vehicle testing program, as well as its analysis of the features offered on each vehicle. To even be eligible to become a Top Pick, for example, a vehicle has to offer advanced safety gear like automatic emergency braking.