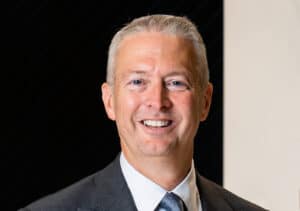 Nissan’s Mike Colleran said that the automaker was not in talks with tech giant Apple to build a car.

Nissan is “not in any discussions with Apple,” despite reports the two have been talking since a proposed deal between the tech giant and South Korea’s Hyundai Motor Group broke down earlier this month, a senior Nissan executive said Tuesday.

The second-largest Japanese automaker is in the midst of a major turnaround plan following several years of financial and market share losses. That spurred reports that Nissan could seek a deal with Apple, which has been looking for a way to get into the car business without having to set up its own manufacturing operations. A proposed $6.4-billion deal with Hyundai fell through, apparently due to internal concerns within the automaker, TheDetroitBureau.com reported last week.

“We’re not in any discussions with Apple,” said Mike Colleran, senior vice president of marketing and sales for Nissan North America, during an online meeting of the Automotive Press Association in Detroit. That said, Colleran added that, “We’re open to conversations across the board” with potential allies and “will enter into partnerships that are wins for both sides.”

What’s next for Nissan Next? Lots of product 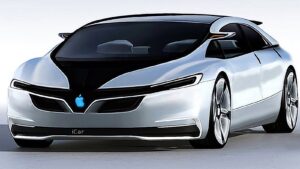 Rumors — and renderings like the one above — of an Apple Car have been around for at least a decade.

For now, Nissan is focusing on ways to revive its flagging fortunes through a broad strategy dubbed Nissan Next.

The centerpiece of that program is the launch of 10 new products by the end of 2021. These cover a broad array of market segments, including the compact Rogue and midsize Pathfinder SUVs, as well as the full-size Armada. The automaker also launched a complete makeover of its Sentra sedan – a runner-up for North American Car of the Year.

While some competitors, like Ford and General Motors, are scaling back and even abandoning the passenger car market, compact and midsize sedans “are still big segments and there are going to be fewer competitors. They are in our future,” Colleran stressed.

There’s another declining segment Nissan won’t abandon, and the next-generation Z-Car debuts later this year, the marketing chief saying that, even if sales are modest, the sports car defines the brand’s “DNA.” 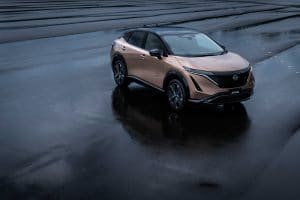 The 2021 Nissan Ariya is about the size of a Rogue SUV – but features the interior space of the bigger Murano.

Yet another product set to reach U.S. showrooms later this year is the Nissan Ariya, an all-electric SUV. The body style should help it gain traction in the emerging EV market, though Colleran said the automaker’s original battery car, the Leaf has begun regaining market momentum with the launch of a longer-range version.

Nissan CEO Makoto Uchida last month announced plans for the automaker to have all its vehicles using some form of electrified powertrain by the mid-2030s. Among the options are BEVs like Leaf and Ariya, conventional and plug-in hybrids and the unusual Nissan e-power system. It uses a small battery pack and an internal combustion engine that serves solely as a generator for when the battery runs down.

Right now, the e-power technology is not available in the U.S. but Colleran said the company is looking at “how it might fit in” for the U.S. line-up.

With all the new products, noted Colleran, Nissan will go from having one of the U.S. market’s oldest portfolio of products, to one of its newest. That said, “You can change the product but if you don’t change the culture and the business you have only gone halfway.” 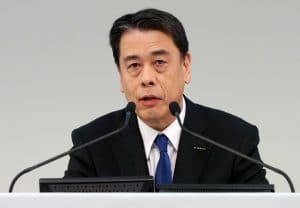 Nissan CEO Makoto Uchida said recently he expects the automaker to have most of its product line-up offering electrified models by the mid-2030s.

There are several central changes underway as part of Nissan Next. For one thing, the carmaker is cutting back on daily rental fleet volumes. It also is cutting dealer inventories to avoid piling up unsold vehicles that then have to be sold off at a discount. And, in what would seem like basic, common sense, Nissan is letting dealers place more of their orders rather than just dumping vehicles on showroom lots.

One of the biggest changes, however, comes with the launch of the Nissan at Home program. Colleran describes it as “a suite of at-home tools where customers can go from initial shopping to delivery and even serve of the vehicle.”

Shifting to a shop online model

The COVID pandemic has rapidly accelerated the shift from in-store to at-home car buying, the marketing executive said, echoing a broad industry consensus. And he expects that trend to continue even after the pandemic ends – though Colleran said there will always be some buyers who want to visit a showroom, at last during some part of the buying process.

The executive declined to discuss specific sales and earnings targets for the coming year. But Nissan clearly needs to regain momentum in the U.S., one of its biggest markets, in order to reverse the overall slide in its global sales and earnings.

For the U.S. market, as a whole, the company has forecast demand will reach 16.2 million, a sharp upturn from 2020, and Colleran said there are “headwinds” that could push demand even higher. Among other things, a rapid rollout of the COVID vaccines could give a boost to the American economy.

There could be some tailwinds, as well, however. A new report by IHS Markit released Tuesday warned that the ongoing shortage of computer chips could delay global production of as many as 1 million vehicles. For its part, Nissan has had to trim production at a number of its plants.

For now that has had “very little impact on (Dealer) inventory,” said Colleran, but there is “a bit of murkiness” trying to figure out the longer-term effects. “We are evaluating it every day” as the industry approaches the second quarter.