Automaker the latest to up its used-car sales results.

Ford has launched a new used car program aimed at giving customers “peace of mind” by adding inspections, warranties, guaranteed pricing and even home delivery on vehicles as much as 10 years in age.

The Ford Blue Advantage program takes the automaker’s current Certified Pre-Owned program another step by including potentially millions of vehicles that previously covered by traditional CPO programs. Ford also becomes the first automaker to include vehicles built by other manufacturers when sold by its franchised dealers.

The Blue Advantage program addresses “the pain points of buying a used vehicle and the unknowns that surround that,” including the quality of the vehicle, as well as the price,” Andrew Ashman, the used vehicle manager for the Ford brand, told TheDetroitBureau.com. “The fear of the unknown is greatly reduced when customers know the vehicle has been inspected by a factory-certified technician.” 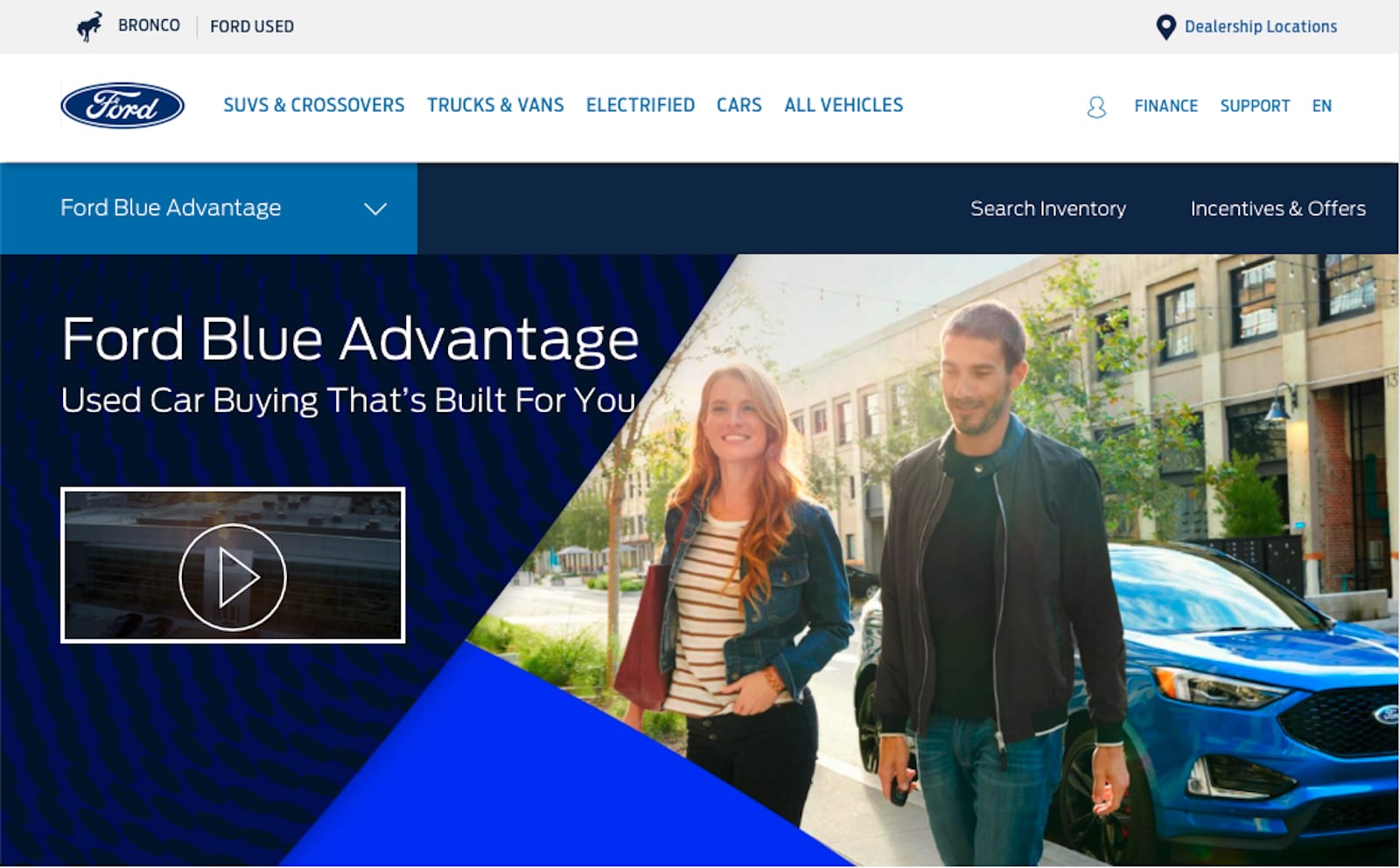 The Blue Advantage program effectively serves as an expansion of Ford’s long-running CPO effort. It not only expands the number of vehicles covered but also integrates some of the lessons the automaker has learned during the pandemic, including the growing customer demand for online retailing.

There are two levels to what Ford is marketing as a new brand:

All vehicles covered by Blue Advantage, whatever the tier, get a CarFax vehicle history report. And they all get award points worth two free service visits on the Gold program, a single visit with the Blue, said Ashman. Dealers, meanwhile, will offer a guaranteed price to potential buyers.

About 10% of the used vehicles Ford dealers Ford dealers handle typically were covered by the earlier CPO program, but a large share of the rest could not be protected by the Blue Certified benefits.

All of the vehicles will now be listed on the new Ford BlueAdvantage.com website which was developed in partne 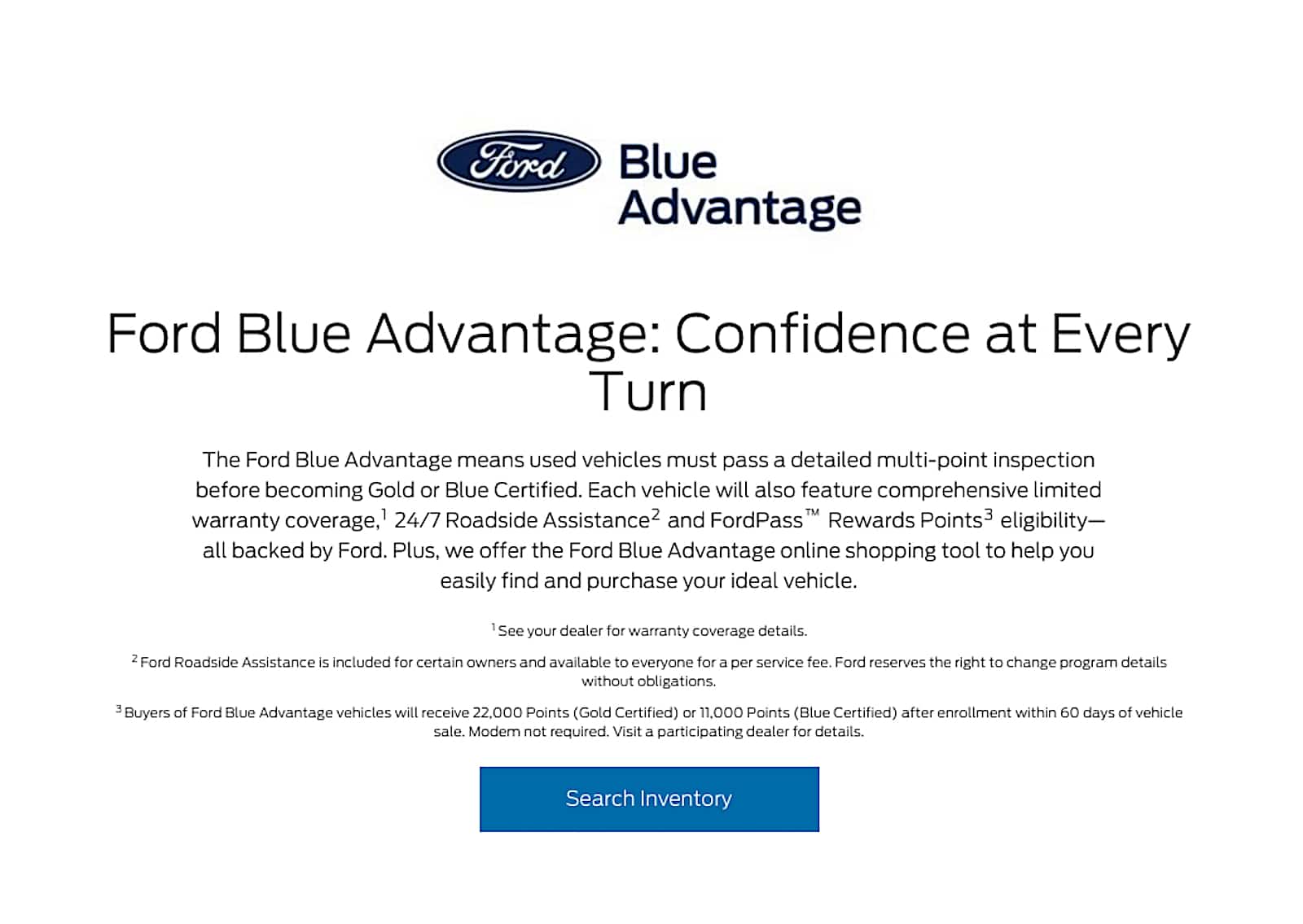 rship with buying service AutoTrader, one of the industry’s leaders. It permits deep searching for not only a vehicle’s year and model and color but also for individual features, such as a moonroof or leather seats.

“That made the customer experience a lot better than if we did it ourselves,” Ashman conceded.

The pre-owned market has grown red hot since the pandemic hit, and competition has grown even more fierce than in normal times. Adding to the pressure, motorists have grown accustomed to using the internet much as they do for other purchases. That shift is expected to continue even after the coronavirus is brought under control, according to most industry analysts. 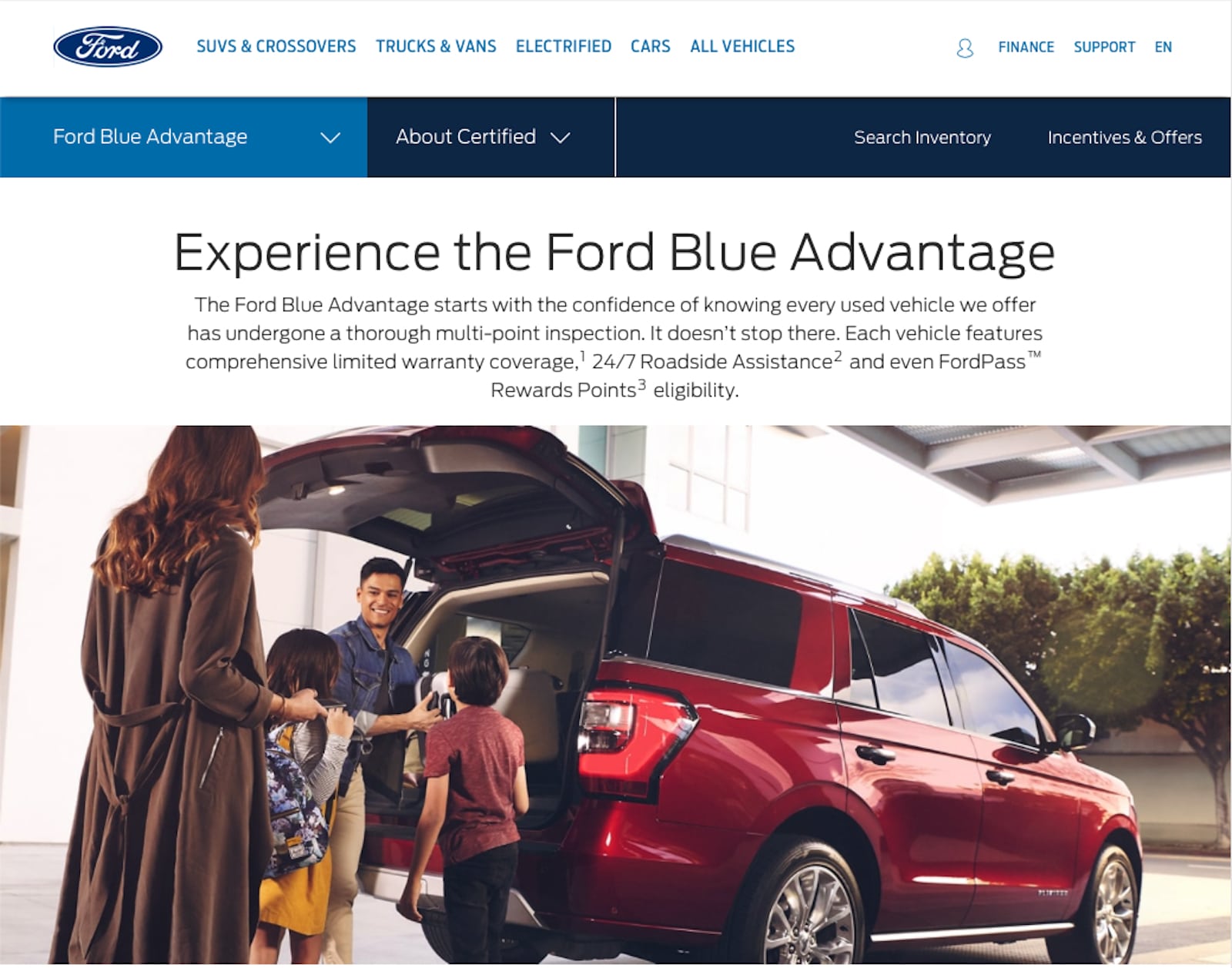 As a result, all Ford dealers participating in the Blue Advantage program will now offer at-home delivery. Others are being encouraged to add features such as at-home test drives, personalized video walkarounds and the ability to swap out a vehicle if the customer isn’t satisfied with their purchase, said Ashman.

While a growing number of new vehicle buyers now complete the purchase entirely online, he said that is likely to be less the case with Blue Advantage customers. “Many … want to sit, touch and even smell the used car before they buy. Many don’t want to do the whole process online.”

The Ford Blue Advantage program will officially roll out this week during the virtual version of the annual National Automobile Dealers Association convention. It’s a soft launch, however, and some dealers have already begun offering it. Ashman claims early results have been positive, with a few reports of double-digit sales increases.

Franchised dealers normally handle about a third of the 3 million used Ford’s under 10 years of age sold in the U.S. each year. The goal is to increase that substantially using the new sales tool.

Ford isn’t the only automaker looking to address used car pain points, however. Honda and its upscale Acura brand launched their own “used-car initiative” in December. That program also expands the vehicles inspected and carried under warranty, while making it easier for buyers to shop online.