For GM, Super Cruise and the Concept of a Connected Car is More Than 50 Years Old

First launched in 2017 on the Cadillac CT6, which ended production last month, Cadillac will offer a revised version of Super Cruise on the new 2021 CT4, CT5 and Escalade. It’s an expensive and highly technical undertaking, one that undoubtedly establishes the connected car as part of Cadillac and GM’s future.

It’s a realization of a future that dawned in 1996, when OnStar and its unique antenna was first offered by GM as a concierge service providing directions, restaurant recommendations as well as summoning emergency help. In fact, at a recent press conference, GM executives admitted that Super Cruise is really predicated on one very simple feature: the OnStar antenna.

Not a new idea

But the idea of the connected car is far from new at GM. In fact, General Motors Research first trumpeted the idea in July 1966, when the automaker unveiled its experimental “Driver Aid, Information and Routing” system, or DAIR.

The company’s internal newsletter painted a scenario of its practicality:

“Picture yourself on a long, lonely stretch of highway. It’s a rainy night, and you’re trying to stretch your gasoline to the next service station.

“Sure enough, the engine begins to sputter. You coast to the shoulder and stop. Your wife, who suggested a stop at the last town, gives you the special look she saves for such occasions.

“It’s a bad situation at best. But if the car is equipped with GMR DAIR, you simply dial a series of numbers on a small instrument panel. The message is received by a nearby repeater and relayed to its closest service center. A reassuring voice acknowledges the message; with a few minutes, gasoline has arrived and you’re on your way.”

Described by GM as a “highway communications system,” the main part of DAIR used a Citizens Band radio equipped with an encoder and a telephone dial. If travel information was needed, the driver dialed 0. Dialing 1 requested the police, 2 an ambulance, 3 a fire truck, and 4 a tow truck. 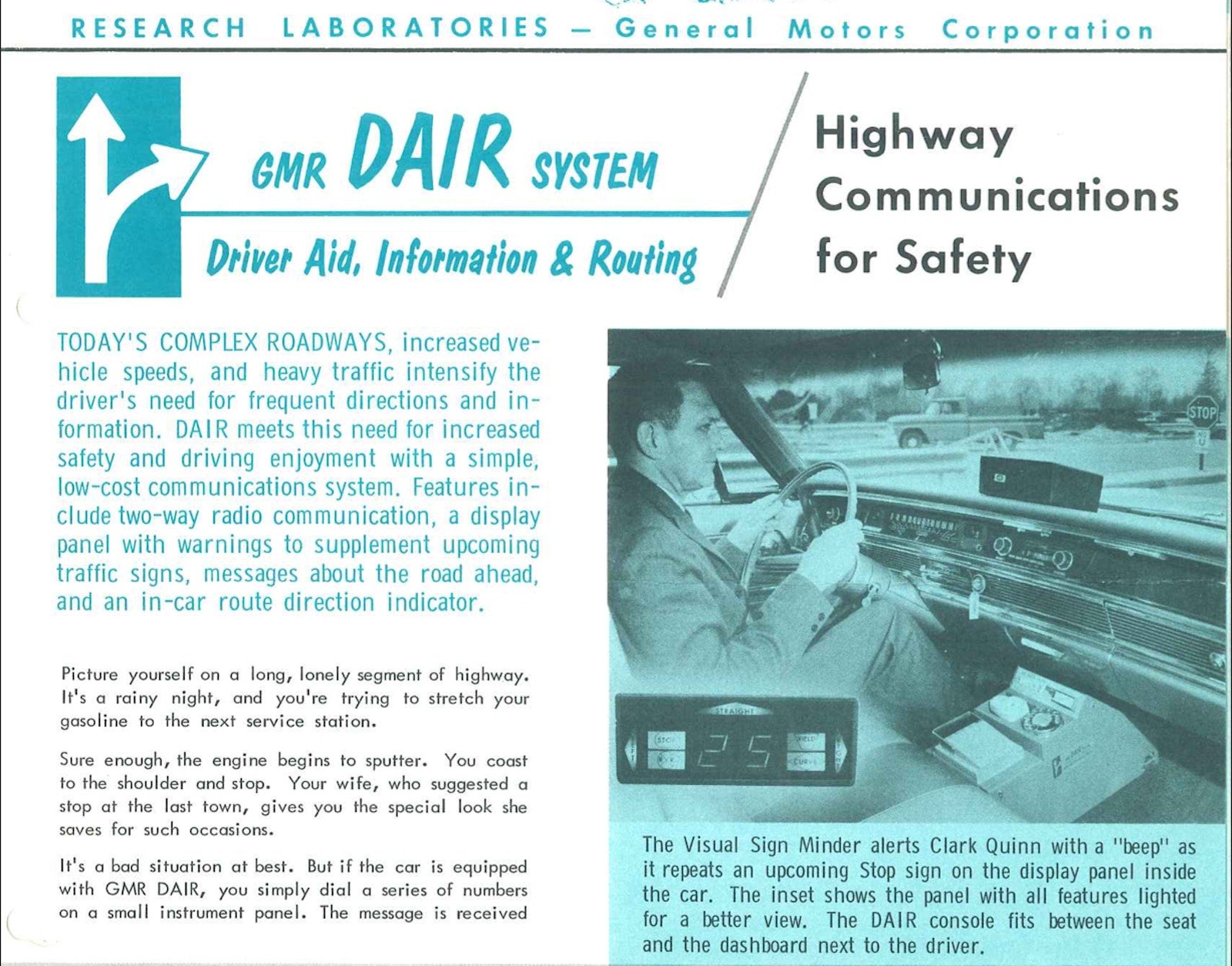 Once the driver dials the number, the encoded signal is picked up by a repeater, located every three-to-five miles, which transmits the request through wires to a service center. There, the operator prints out the request, which includes the vehicle’s license plate number, the road it’s traveling on and the location of the repeater so that operator can send help. This is followed by a one-on-one call on the CB radio.

GM Research said this was the easiest part of the system to initiate. But DAIR provided more than emergency communication. It also provided automated messages of upcoming travel conditions broadcast through one of two proposed highway safety channels.

The taped or live message would be tripped by the car’s antenna as it travelled over magnets embedded in the highway. Embedded magnets were also envisioned for use in DAIR’s “Visual Sign Minder,” which was mounted in front the driver. Driving over magnets that were placed in a specific order would activate a light or buzzer that would tell the driver when to turn left, turn right, stop, yield or warn about railroad crossings, or curves. GM saw this as a system that would supplement, not replace, traffic signs.

Not quite satellite navigation

But the system’s most amazing feature is the “Route Minder.”

GM imagined that rather than using maps or a AAA TripTiks, drivers would choose a route and request a custom punch card, which was inserted into a special slot on the DAIR console.

At each intersection, embedded magnets’ signals would be filtered through decoding circuitry and compared to the punch card’s instructions. DAIR would then signal to the driver whether turn left, right, or proceed straight through lights and buzzers. 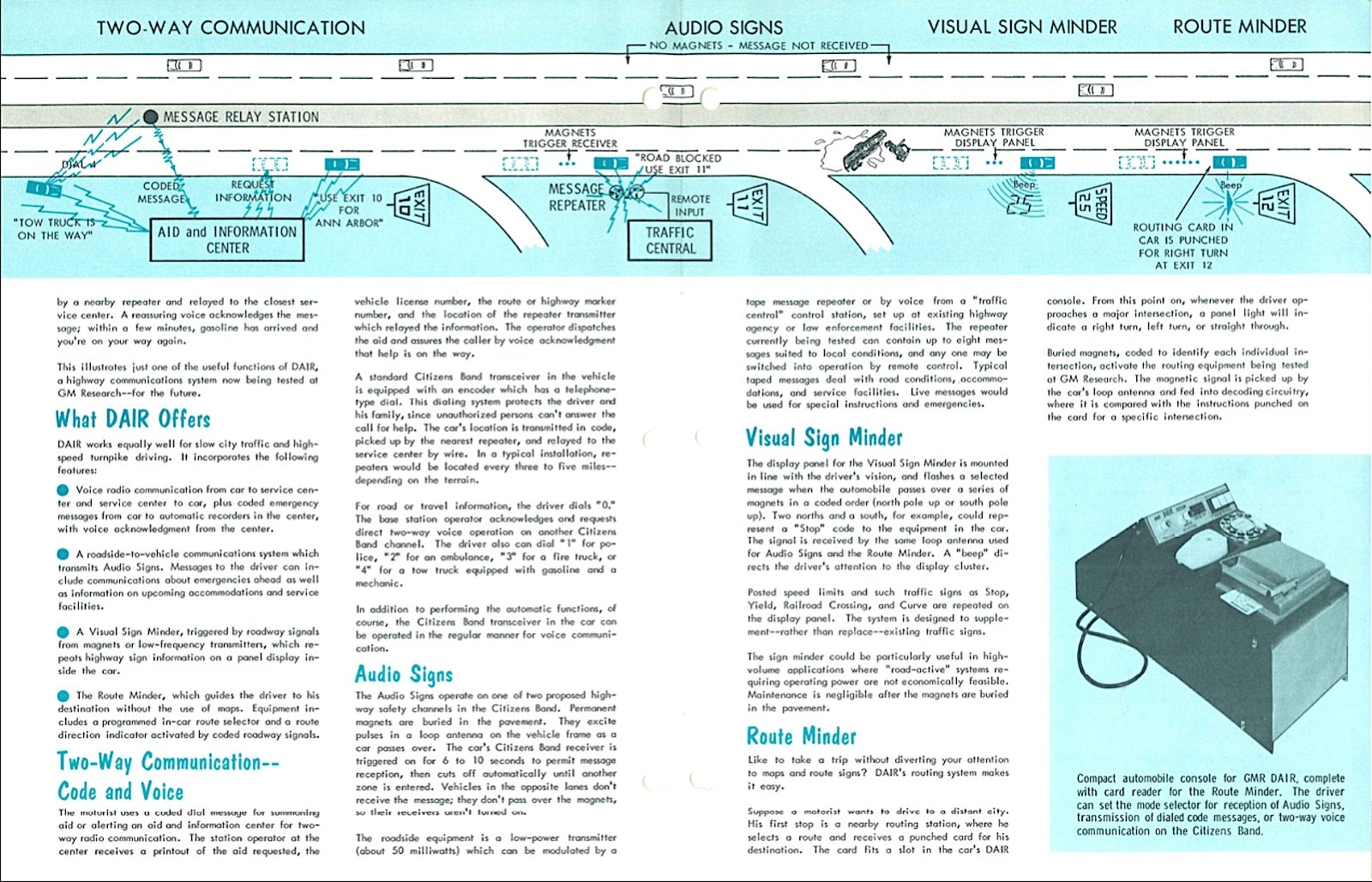 The system was installed on two 1966 GM cars, and a miniaturized version of the interstate highway system was constructed at GM’s Tech Center in Warren, Michigan, just north of Detroit, complete with magnets buried in concrete and roadside transmitters.

Far from high-tech, the system employed existing technology, and the automaker suggested that modified CB radios would be the base installation, with the Visual Sign Minder and Route Minder available as additional options. GM engineers also said that existing CBs could be easily modified inexpensively to handle the new system.

As for infrastructure, GM admitted that installation would be the biggest expense; maintenance was low after that.

How did they know that? Research on DAIR began in 1955, a year after a GM engineer was granted a patent for the heated car seat.

2 responses to “For GM, Super Cruise and the Concept of a Connected Car is More Than 50 Years Old”