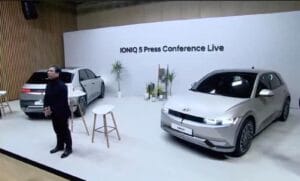 Hyundai’s brand-within-a-brand showed off its first entry, the all-electric Ioniq 5.

Hyundai’s ambitious electrification plans got a big boost today, the South Korean carmaker formally launching its new brand-within-a-brand with the debut of the 2022 Ioniq 5.

The first of what will be an assortment of all-electric models is largely based on the Hyundai 45 concept vehicle that made its debut at the 2019 Frankfurt Motor Show – though the first Ioniq model also pays homage to the brand’s very first passenger vehicle, the Hyundai Pony.

“A new mobility experience for the next generation – this was the mission from the first day we began this project, to look ahead towards the horizon, but stay fundamentally Hyundai,” said SangYup Lee, senior vice president and head of Hyundai Global Design Center. “Ioniq 5 is the new definition of timeless, providing a common thread linking our past to the present and future.”

Carving out its own niche 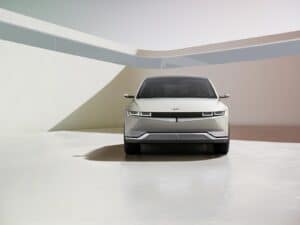 The overall shape of the Ioniq 5 doesn’t readily fall into any traditional category, the battery-electric car falling somewhere between a crossover and a hatchback. The angular exterior features Hyundai’s first clamshell hood, with a V-shaped bumper topped by distinctive “Parametric Pixel” lighting.

The Ioniq 5 also becomes Hyundai’s first production vehicle to replace sideview mirrors with cameras, small monitors mounted on the inside of the two front doors. The technology has so far been approved for use in only a handful of markets. Hyundai will have to use conventional mirrors in the U.S., at least until the new approach wins approval from the National Highway Traffic Safety Administration.

The new battery-electric vehicle is the first to use Hyundai’s new, skateboard-like e-GMP architecture. The platform eventually will be shared with a wide range of products, from small sedans to large SUVs.

The figures tell the story. The Ioniq 5 is barely as long as the compact Hyundai Tucson crossover. Yet its 118-inch wheelbase and roomier interior are closer in size to that of the big Palisade SUV. The key was to recapture space normally devoted to an engine, the e-GMP platform mounting its twin motors and battery packs under the cabin’s flat load floor. 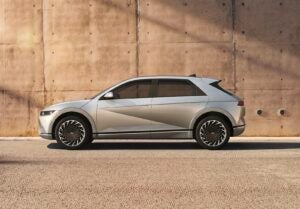 The Ioniq 5 is about the same length as the Tucson crossover, but its wheelbase and interior room are on nearly on par with the Palisade.

The goal was to create “a movable living room,” said Thomas Schemera, Hyundai’s product chief, during a media web briefing. The “universal island” center console can slide forward or back from front to rear seats and the back row can recline.

Twin wide-screen monitors stretch out across the instrument panel, one replacing traditional analog gauges, the other not only serves as the Ioniq 5’s infotainment center but also replaces virtually all traditional knobs and switches. An optional, augmented reality Head-Up Display system will be offer, as will Hyundai’s semi-autonomous driver assistance system. It will not only help a motorist maintain their place in a lane but automatically execute a pass simply by tapping the turn signal.

The cabin makes extensive use of recycled and sustainable materials, such as yams and recycled pop bottles, while even the optional leather package was crafted using what Hyundai bills as an environmentally friendly tanning process.

The cargo compartment also benefited from the e-GMP platform, with 18 cubic feet of space. Fold the second row down and that jumps to around 57 cf. 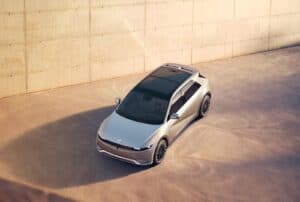 The Ioniq 5 comes with several powertrain options, including a dual motor option putting out 306 horsepower.

Ioniq 5 will be offered with several different drivetrain packages. The base car will rely on a single, rear-mounted motor producing 218 horsepower and 258 pound-feet of torque – enough to launch from 0 to 100 km (0-62 mph) in 7.4 seconds. A twin-motor, all-wheel-drive package bumps that to 306 hp and 446 lb-ft and cuts launch times to 5.2 seconds.

Two battery packs will be available, one at 58 kilowatt-hours, the other at 72.6 kWh. The bigger pack, with the rear-drive motor layout should yield around 295 to 300 mile range, according to Hyundai. But that figure is based on the WLTP test cycle and will likely come in closer to 250 miles using the American EPA test process.

Charging can be handled using anything from a 120-volt outlet to the latest, 800-volt public quick chargers. Using the high-voltage system the battery packs can go from 10 to 80% state-of-charge in as little as 18 minutes, or add more than 60 miles of range in about 5 minutes.

New platform for an array of upcoming EVs

The e-GMP architecture is “a very flexible, scalable platform we can apply to various products, from small sedans … up to big SUVs,” said Fayez Abdul Rahman, the Hyundai senior vice president who led its development. 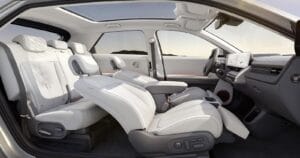 Hyundai’s goal for the interior of the Ioniq 5 was to create a moveable living room.

The automaker has big plans for the platform, with two more products set to come out under the Ioniq badge during the next several years. And e-GMP will be used by sibling brands Genesis and Kia, as well. Hyundai Motor Group expects to sell 1 million battery cars annually by 2025.

“We see very rapid growth of electrification. And, in fact, this year, EV demand will increase more than 30% on a global basis,” said Hyundai President Jaehoon Chung.

He said the automaker expects to sell about 70,000 Ioniq 5 BEVs this year, with sales expected to grow sharply in 2022 and beyond.

The U.S. market has been relatively slow to accept the new technology, battery-electric vehicles accounting for just 1.9% of the new car market last year. But a new forecast by IHS Markit predicts that will jump to 2.5% this year.

With the new Biden administration promoting BEV technology and planning to put 500,000 public charging stations in place by 2030, “that presents a great opportunity for us,” said Jose Munoz, head of the automaker’s North American operations.

The Ioniq 5 will go on sale in Europe and South Korea within about a month, according to Chung, then follow in the U.S. during the second half of the year. Pricing has not yet been announced.