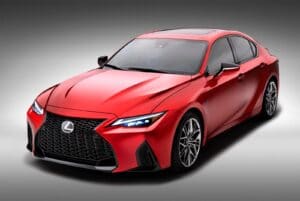 Lexus is upping its performance game with the debut of the 2022 IS 500 F Sport Performance.

Lexus has been working hard to reshape an image of building blandly reliable products. Now, it’s taking things to new extremes with the debut of the 2022 Lexus IS 500 F Sport Performance.

Lexus claims the Performance edition “dials up the sports sedan formula to 11,” compared to last year’s F Sport. Credit the return of the V-8, here punching out 472 horsepower, 122 more than the turbo-6 in the 2021 IS F Sport.

This is just a hint of what’s to come, a statement noting the IS 500 is “the first model in the new Lexus F Sport Performance line.” The marque is getting ready to take direct aim against the likes of Mercedes-AMG and BMW M.

Return of the V-8 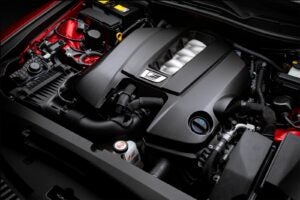 Lexus appeared to take a step back, however, even while giving the IS line a complete makeover last year. Engineers at the Toyota Technical Center in Shimoyama swapped out the eight for a 3.5-liter V-6 pumped up to 350 hp and 311 lb-ft.

Lexus officials hinted there might be more to follow – as we found out today. And the Performance line appears ready to take the brand to new levels of power.

It sounds quicker too

It’s designed to sound quicker, as well, thanks to “a throaty quad exhaust system with dual stacked tail pipes that perfectly amplify the new V-8 engine. This exhaust not only sounds ferocious,” Lexus said in a statement, “but is inspired by F models, like the RC F.”

The Performance model’s V-8 pairs with the same 8-speed automatic as the rear-drive IS 350. 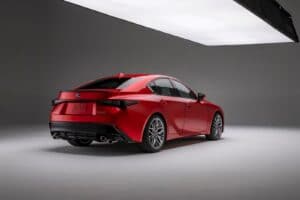 The IS 500 gets customized driver mode settings, including Sport and Sport+. The latter modifies not only engine and transmission response but also tightens up the sedan’s steering and suspension damping.

“The ultimate goal is to deliver a new generation of Lexus vehicles that is more balanced, refined in control, and confident than ever before,” Lexus said.

Straight line acceleration is just part of the picture. To handle the curves, the IS 500 comes standard with the Dynamic Handling Package now available as an option on the IS 350 F Sport. That includes an adaptive suspension and Torsen limited-slip differential. The chassis also gets a new Yamaha rear performance damper.

To scrub off speed, the Performance model’s brakes are upgraded, as well, with larger 14-inch two-piece aluminum front rotors and 12.7-inch rotors in the rear. 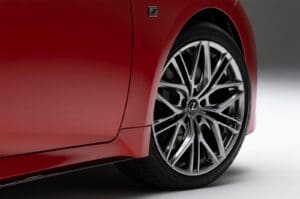 To scrub off speed, the Performance model gets 14-inch two-piece aluminum front rotors and 12.7-inch rotors in the rear.

Visually, the IS 500’s hood has been raised by nearly 2 inches and gets more distinctive character lines. The front bumper and fenders also have been stretched to handle the big V-8. There’s also a new, rear diffuser framing the sedan’s quad exhaust, dark chrome window trim, and a black rear lip spoiler.

The IS 500 will come with exclusive 19-inch split-10-spoke Enkei alloy wheels that shave about six pounds off total vehicle weight.

Inside, look for similar black badging on the heated leather steering wheel and door sill plates. And the gauge cluster will feature unique animation.

Like other IS models, the IS 500 will get a number of upgrades to its advanced driver assistance technology. Among other things, the Forward Collision Warning system now will have greater range. It will also be able to detect a potential head-on collision when turning left.

Lexus will release pricing information closer to the launch of the 2022 Lexus IS 500 F Sport Performance in autumn. The 2021 Lexus IS 350 F Sport starts at $42,900 plus delivery fees and taxes.