New, 3-row CUV will have new look, new transmission and, we expect, plenty more to boast about. 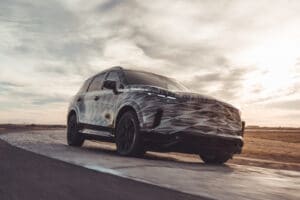 Infiniti further expands its crossover offerings for 2022 with the new QX60 shown in the teaser shot above.

Infiniti has trained the spotlight on its all-new QX55 in recent months, the coupe-like crossover expected to become one of the biggest additions to the line-up next year. But that doesn’t mean everything else will stay static. After pushing back the expected launch of the bigger QX60 due to the pandemic, we’re finally getting a first look at what will now be a 2022 model.

The high-line Nissan brand will be rolling out the next-generation Infiniti QX60 sometime into the third quarter of this year. Though we’ll have to wait a while to get more details, we’re able to offer up some insight into what is expected to be a major update.

For now, the luxury brand is confirming that the 2022 QX60 will get a new 9-speed automatic transmission to pair with a carryover 3.5-liter V-6. That, Infiniti promises, will yield improved performance, as well as a smoother, more comfortable ride. Odds are we’ll also see some improvements in fuel economy. 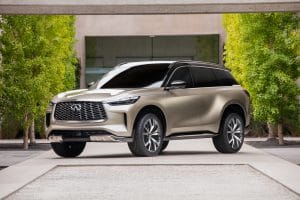 Infiniti revealed the QX60 Monograph concept from its global headquarters in Yokohama, Japan.

That’s all well and good but, as these teaser images suggest, the “all-new,” three-row SUV will get a much broader makeover for the coming model-year. To see what that will look like without the camouflage and creative photography, just look at the Infiniti QX60 Monograph the automaker introduced last September.

You’ll have to squint a bit and use your imagination to get past the usual show car touches, of course, which likely will mean somewhat smaller wheels and less flashy headlights. The Monograph’s aero-flush door handles are all but certain to be replaced with more conventional handles. But the production 2022 Infiniti QX60 is expected to lift the overall shape and dimensions. Spy shots and these teaser images indicate the makeover will yield wider fenders, more curvaceous door panels and, on the whole, a notably more muscular appearance.

That will mean a larger and more distinctive double-crest grille, more slit-like headlamps and a more raked roofline – the latter limited primarily by the need to ensure good headroom for all three rows.

Also look for many of the same interior enhancements coming to the QX55, with a cabin that will aim for a more “calming” feel, as global design chief Alfonso Albaisa puts it. Heated “zero-gravity” seats are a sure bet, as well as a larger infotainment display than the outgoing model. Like other new Infiniti crossovers, expect the system to be both faster and offer more features, including Apple CarPlay and Android Auto. The QX55 offers only the Apple system in wireless form and we expect that to be the same case with the QX60. 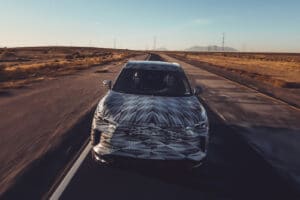 The new QX60 is expected to carry over some upgrades found on the QX55.

Getting back to the powertrain, Infiniti isn’t saying whether there’ll be any enhancements to the 3.5-liter V-6’s output. It currently delivers 295 horsepower and 270 pound-feet of torque. Considering the size of the QX60 and the class it competes in — with competitors like the Audi Q7, BMW X5 and Mercedes-Benz GLE — a bump up in the numbers would clearly be welcome.

A hybrid could be in the works, too

For now, all we have to go on is this comment by Dave Kiesel, Infiniti’s manager of powertrain performance at the Nissan Arizona Testing Center. “The all-new QX60 has a direct and linear acceleration feel. It gives the driver confidence to not only increase their standing start but also passing on the freeway and in the city. You just step on the pedal, it downshifts, and you go.”

One question that has been circulating in recent months is whether Infiniti will offer a hybrid option for the new 2022 QX60, whether at launch or in the near future.

We hope to fill in more blanks in the next month or so.