The ink was not even dry on Pete Buttigieg’s confirmation as Secretary of Transportation by the U.S. Senate when several automakers announced they were “withdrawing” from the lawsuit filed by the Trump administration to roll back the State of California’s right to set its own emission and fuel economy standards.

Toyota, Fiat Chrysler and Subaru joined General Motors, which pulled its support for the suit last November, in dumping the effort. Previously sided with Trump administration’s effort, encapsulated in federal lawsuit filed in the fall of 2019 to shut down California’s role in setting the nation’s automotive policy.

The automakers insisted they were not trying to punish California for its aggressive stance on climate change but to campaign for “one national standard” that could be applied across the United States.

However, the world has changed dramatically since the previous administration initially filed suit with the support of GM, FCA and Toyota as well as Hyundai, Kia, Mazda and the National Auto Dealers Association.

For one thing, after a boisterous campaign that led to record voter turnout, Trump is no longer president and California has expanded its fight against climate change by moving aggressively to foreclose the sale of new vehicles with internal combustion engines throughout the state by 2035.

California Governor Gavin Newsome tweeted his support for the move, offering his thanks for “dropping your climate-denying, air-polluting, Trump-era lawsuit against CA.”

He added, “Good start. Now it’s time to join forward-looking carmakers in the CA framework to protect our air and planet.” Other automakers, including Ford, BMW, Honda and more forged a new deal with the state on mandates that were tougher than the Trump standard, but less stringent than the Obama administration’s benchmarks.

Edmunds, the internet-based car buying service, is predicting sales of electric vehicles will set a record in 2021 and as of last week, General Motors is saying it plans to exit the business of selling cars with combustion engines by 2035 and become carbon neutral by 2040.

The Coalition for Sustainable Automotive Regulation, which also sided with the Trump administration in its battle against California, reiterated its support for having just one nationwide emissions standard, but said it was leaving the litigation “in a gesture of good faith,” towards the Biden administration.

In his first full day of office on Jan. 21, the Biden administration had asked to “pause” the litigation around the California standards.

“In a gesture of good faith and to find a constructive path forward, the CSAR has decided to withdraw from this lawsuit in order to unify the auto industry behind a single national program, with ambitious, achievable standards,” the CSAR said in a statement.

CSAR’s move follows the lead of General Motors, which was also initially on the side of the Trump administration but exited in November following Biden’s election victory, according to The Hill, an online publication that follows development on Capitol Hill.

And it comes following the Biden administration’s decision ask the court to pause the litigation, after it identified the former Trump administration’s rule as one it would seek to review and potentially reverse course on.

“Abeyance will further the Court’s interests in avoiding unnecessary adjudication, support the integrity of the administrative process, and ensure due respect for the prerogative of the executive branch to reconsider the policy decisions of a prior Administration,” the administration said in court. 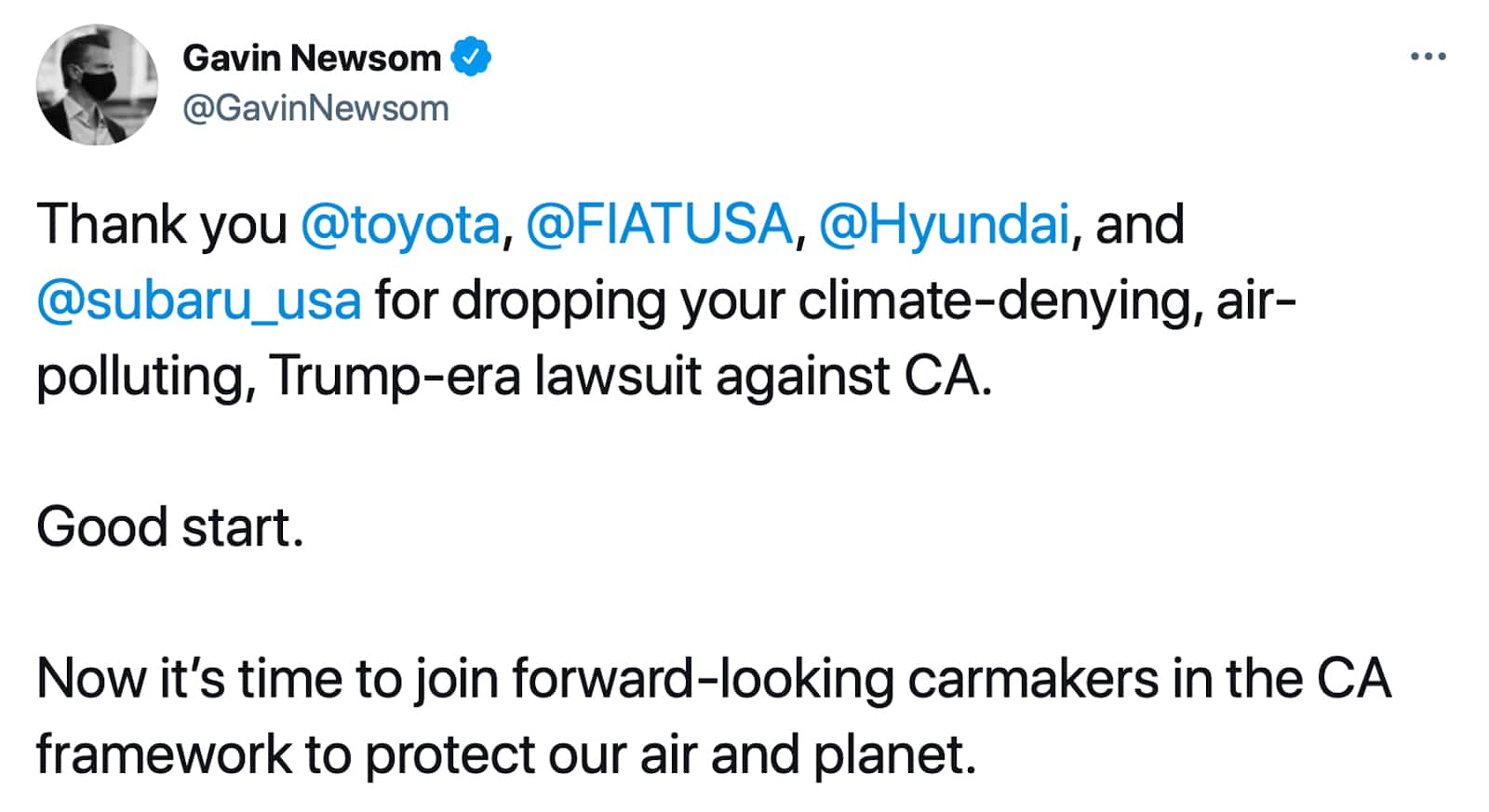 It is also seeking to hit pause on other rules including the prior administration’s methane regulations.

Meanwhile, Buttigieg, the former mayor South Bend, Indiana, who has been tapped by Biden to serve as Secretary of Transportation, and to help lead the new administration’s fight to curb climate change, was confirmed by the U.S. Senate.

The automakers’ decision to withdraw from the lawsuit makes it easier for Buttigieg to discuss a new round of initiatives for the industry and bring California’s interests into the discussion. Relations between Washington and California had been strained during the Trump era.

California, however, has a well-established role in setting automotive policy on issues relating to air quality since the late 1940s and early 1950s when the collision between Southern California’s unique environment, vibrant automotive culture and explosive economic growth had led to the creation of a smog layer that threatened the health of young children and older residents.

The choking smog led to a series of laws, regulations and subsequently court decision that gave the state of California’s statement government, which is now in the hands of Democrats beholden to environmental groups rather than the oil industry, the right to control air quality.

In 2007, the U.S. Supreme Court in Massachusetts vs EPA, gave states the authority to curb emissions of greenhouse gasses, which contribute to climate change.