With fewer vehicles on U.S. roads, drivers are getting bolder.

With so many states restricting the movement of people in an attempt to reduce the spread of COVID-19, traffic levels in the U.S. have fallen substantially; however, traffic fatalities have not followed suit.

The National Highway Traffic Safety Administration reports that through the first nine months of 2020, the most recent data available, that despite number of people on U.S. roadways declining sharply, the number of deaths hasn’t decreased.

According to NHTSA, 28,190 people died in motor vehicle traffic crashes, representing a 4.6% increase compared to the same period in 2019. This is despite the fact that the number of miles driven in the U.S. was down 14.5% during the same period.

The agency notes that with fewer vehicles on the streets, some drivers are feeling emboldened, engaging in riskier than normal behavior behind wheel, such as driving faster or while intoxicated. The result is that the country is tracking to report nearly the same number of fatalities in 2020 that it did in 2019.

NHTSA reports speed-related accidents are up by 15% in some parts of the country. Additional data supports the assertion that people are simply taking more chances behind the wheel during the pandemic, including:

The news doesn’t get any better as preliminary data for the remainder of the year begins to trickle in. The National Safety Council, a nonprofit safety advocacy organization, reported its early findings for October, and the numbers jump.

The number of deaths in October were 3,980, up 16% compared with 2019, bringing the total number of deaths recorded for 2020 to 34,410, pushing the jump through 10 months to 7 percent. It was the fifth consecutive month that fatality numbers increase, the NSC reported. 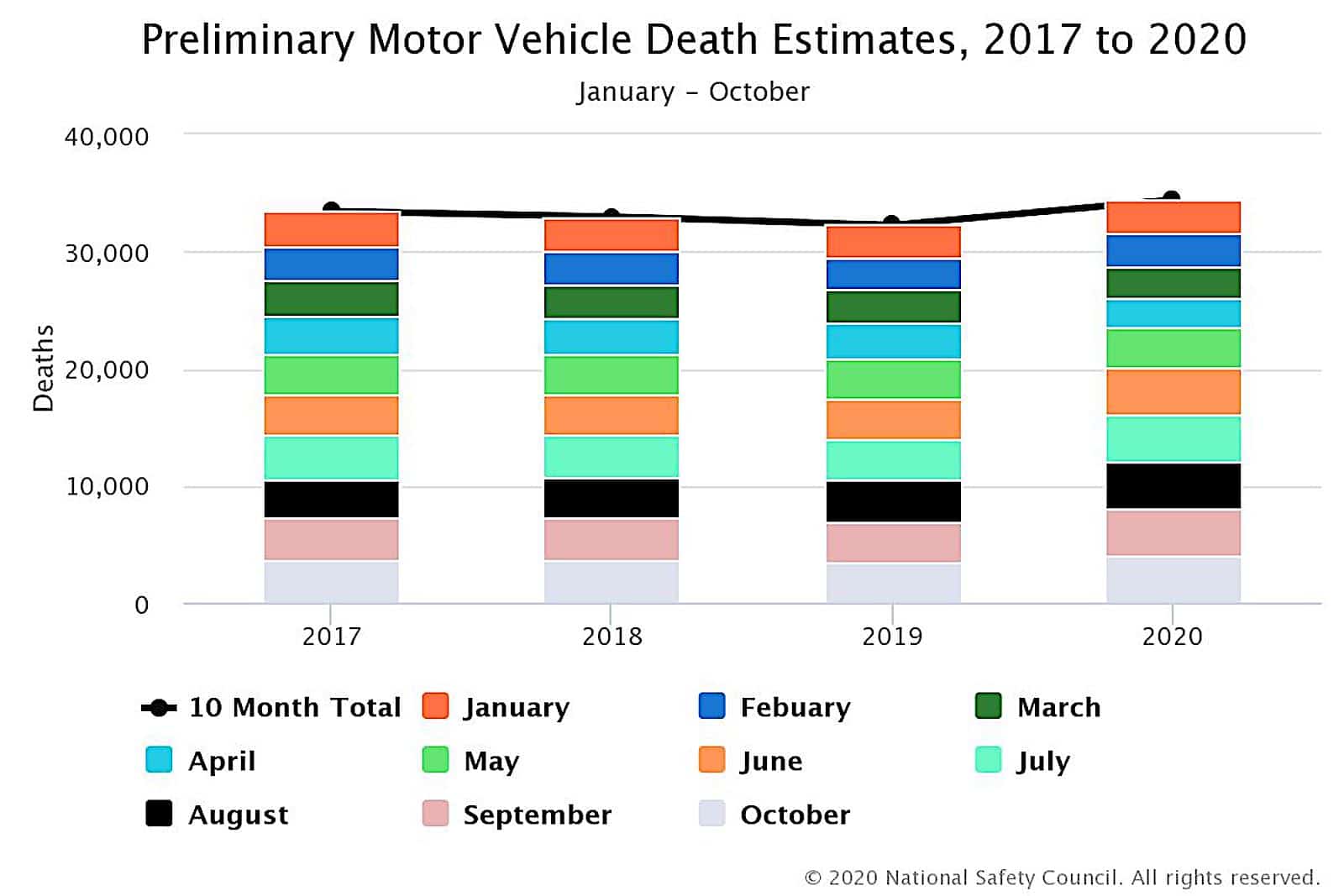 “The National Safety Council is discouraged, though unsurprised, by the data released Wednesday by the National Highway Traffic Safety Administration for the first nine months of 2020,” the group said in a statement. “NHTSA preliminary estimates track with estimates NSC analysis over the same period of time, and both data sets paint a dark picture of the state of safety on our nation’s roadways.

“Vehicle miles traveled have dropped precipitously since the pandemic, but the number of deaths has not followed. We should be able to show a significant safety benefit from having less traffic. Instead, in the midst of the worst health crisis in more than a century, we are experiencing even deadlier roadways — and motor vehicle crashes have been a persistent public health threat.”

Unsurprisingly, the group called upon President-elect Joe Biden and his presumptive Secretary of Transportation Pete Buttigieg to make roadway safety one of the new administration’s top priorities. The shift is particularly disheartening since the total number of deaths in 2019 had decreased from 2018 by 2% with alcohol-impaired driving deaths at their lowest percentage since 1982.