Plan calls for mix of BEVs and Hybrids.

Nissan said today that it wants to have all new products targeting “key markets” rely on some form of electric propulsion by the “early 2030s.”

The plan will rely on both battery-electric vehicles as well as the automaker’s new e-Power hybrid system, it said in a statement. Nissan officials also outlined plans to achieve carbon neutrality “across the company’s operations” by 2050.

“We’re determined to help create a carbon neutral society and accelerate the global effort against climate change,” said CEO Makoto Uchida. “Our offering in electrified vehicles will continue to expand around the world, and this will make a major contribution to Nissan becoming carbon neutral. We will continue to drive innovation that enriches people’s lives as we pursue a sustainable future for all.”

Nissan helped kick off the era of electrification when, in 2010, it launched the Leaf, the world’s first mass market battery-electric vehicle.

It has so far sold 500,000 of the battery cars and remained the dominant player in the segment for much of the following decade, eventually ceding sales le 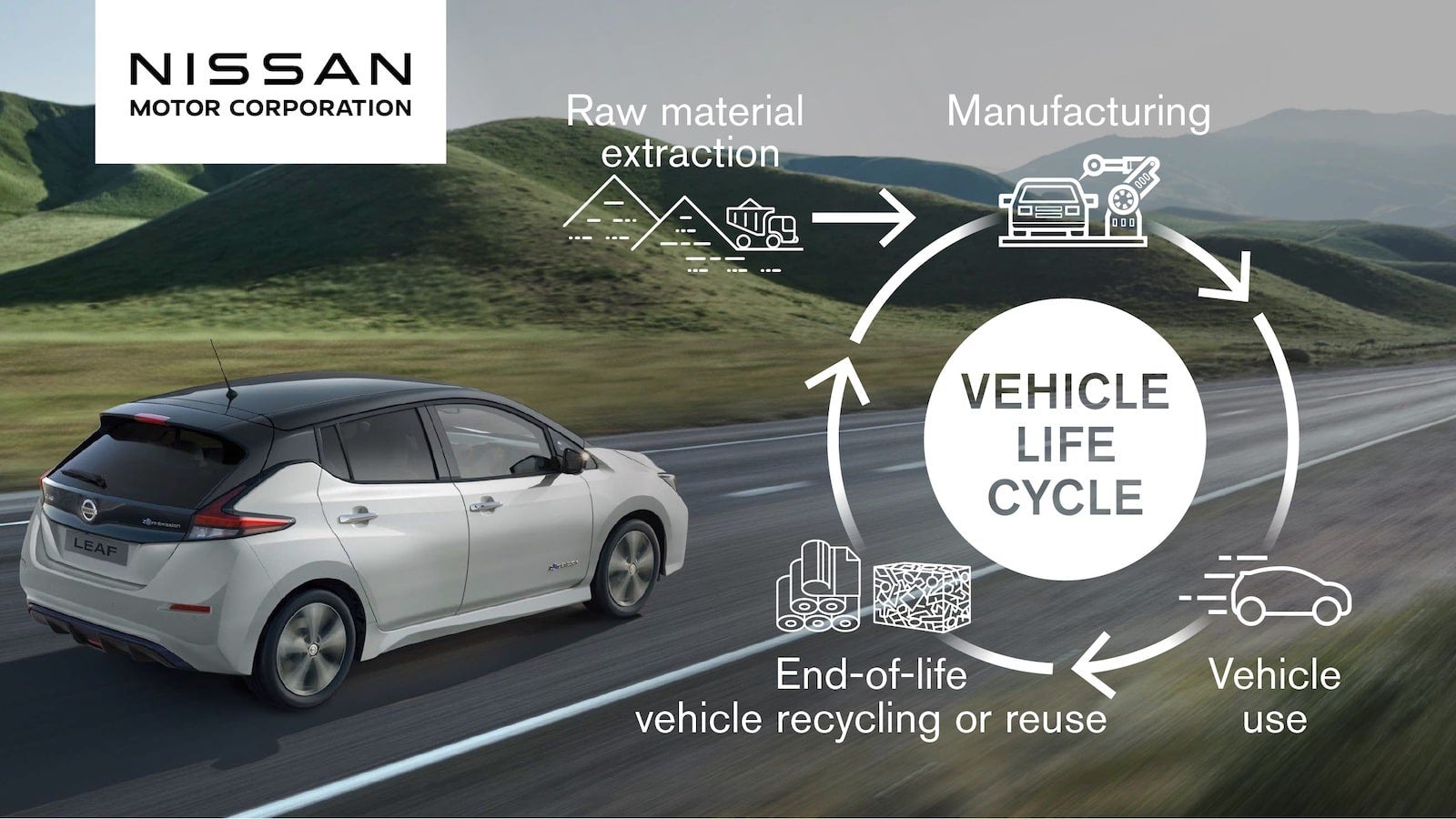 Nisan has since updated the Leaf, revising its design and extending its range, but it has fallen behind other key competitors, such as General Motors and Volkswagen, in terms of sales of pure battery-electric vehicles. Japan’s second-largest automaker hopes to regain momentum later this year when it rolls out an all-new BEV, the Nissan Ariya.

Formally unveiled last July, the crossover uses a brand-new platform and electric drive system that is more powerful than the one in the Leaf, while also able to deliver longer range. The skateboard-like architecture and drivetrain will anchor still more models to come, Ivan Espinosa, the carmaker’s senior vice president of global product planning, said at the time.

“The beauty of this platform is it’s modular (which) allows us to accommodate different possibilities,” Espinosa said, adding that Nissan, along with its alliance partners Renault and Mitsubishi, have “a lot of questions about what new areas of the market we can explore.”

Among the major Japanese automakers, Nissan has taken the most aggressive stand favoring pure electric propulsion. While industry leader Toyota, as well as number three Honda, both plan to bring out BEVs in the next several years, they remain openly skeptical, continuing to put primary emphasis on conventional hybrid and plug-in hybrid technology. 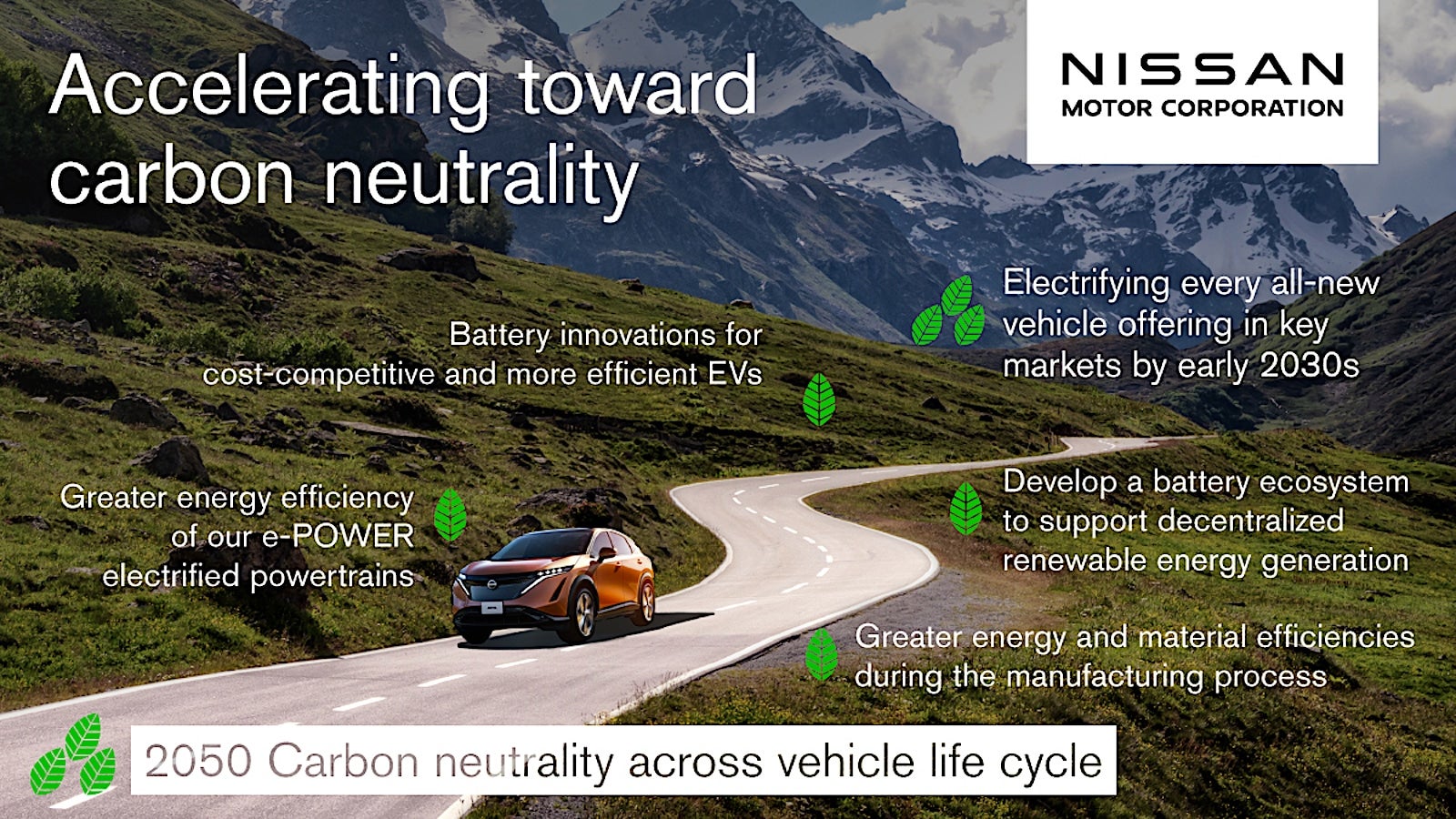 Nissan, which was relatively late to introduce its own hybrid systems, now sees its target as blending various forms of electrified drivetrains, including both BEVs and its new e-Power hybrid system.

That system is what is technically known as a “series hybrid,’ and is unlike the technology used by most manufacturers, such as Toyota.

Nissan did not say how it will divide up future product lines to use the different powertrain technologies. It did note, however, that it plans to go after other technical innovations, notably including the development of solid-state batteries. These are widely expected to advance current lithium-ion technology by offering greater range, quicker charging and lower costs – while also reducing the risk of battery fires.

In its statement, Nissan also said it is looking for ways to boost factory productivity and outlined plans to find other applications for its batteries, such as “second life” applications for batteries that retain a significant share of their capacity even after a vehicle is scrapped.

The goal, it said, is “Development of a battery ecosystem to support decentralized, onsite power generation for buildings with renewable energy sources. Nissan anticipates increased collaboration with the energy sector to support the decarbonization of power grids.”