Jeep Grand Cherokee to Finally Get a Third Row

New Grand Cherokee L will be followed by Wagoneer and Grand Wagoneer models. 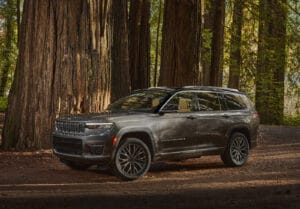 The new 2021 Jeep Grand Cherokee L Summit Reserve will be the first one with three rows of seats since 2006.

For all the various models offered by the Jeep brand there has been a surprising gap in the line-up: a Jeep with three rows. But that shortfall is about to be corrected.

During an online web event today, the Fiat Chrysler Autombiles brand is introducing the long-rumored Jeep Grand Cherokee L, a stretched version of the next-generation SUV. It will soon have company, however, as Jeep also is readying a production version of the high-line Grand Wagoneer Concept unveiled last year, as well as the more mid-market Jeep Wagoneer.

“We see a great opportunity to grow” the Grand Cherokee line with the addition of the three-row model, Jim Morrison, the head of Jeep North America, said during a media background briefing last month.

(Jeep Grand Commander: Bigger is better at least in Beijing.)

The real question is why it took Jeep so long to come up with the Grand Cherokee L considering the strong market demand for three-row utility vehicles. The automaker gave it a try with the launch of the Commander back in 2006, but it fell short of consumer expectations and was discontinued just four years later, about the time the old Chrysler went into bankruptcy. 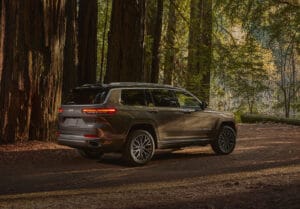 The three-row Grand Cherokee L will hit dealerships in the second quarter of this year.

Coming nearly 30 years after the original Jeep Grand Cherokee made its auspicious debut, punching through a glass wall during the North American International Auto Show’s media days, both the two- and three-row versions of the new SUV look immediately familiar. That starts with the classic seven-slot grille, trapezoidal wheel arches and gently sloping roofline.

It’s always a challenge redesigning “a legend,” said Mark Allen, Jeep’s head of exterior styling, so the look of the Grand Cherokee L was clearly meant to be evolutionary. But the headlights are more slit-like, while the grille leans more aggressively forward, picking up a cue from the Grand Wagoneer Concept. There’s more sculpting to the doors and fenders and all new Grand Cherokee models now come with standard LED fog lamps, headlights and taillights. The SUV also will be available, for the first time, with 21-inch wheels and tires.

“The aerodynamics were very challenging on this vehicle,” said Allen, but were considered critical towards a goal of improving fuel economy.

Other changes include a built-in rear spoiler and roof rack, more platinum-hued chrome, and American flag emblems by the Grand Cherokee badges. Each trim level, such as the Overland and Summit Reserve, will add unique design details and accents. 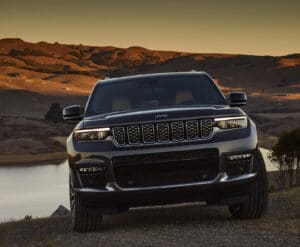 Jeep designers were tasked with redesigning “a legend.”

Inside, the goal was to “create something very different” from the outgoing Grand Cherokee, said interior designer Chris Benjamin. The visual theme is more horizontal, and there’s a use of more upgraded and elegant materials, such as real wood, real leather and suede for the headliner on higher-trim packages.

In keeping with the current focus on high technology, the next-gen Grand Cherokee will feature the latest version of Fiat Chrysler’s infotainment system, Uconnect5 – here being displayed on touchscreens of up to 10.5 inches. The traditional analogue gauge cluster, meanwhile, has been replaced by a 10-inch reprogrammable video screen. There’s also a 10-inch head-up display option.

In terms of safety, Jeep officials claim to have packed in as many as 110 different features. That includes standard advanced driver assistance systems like automatic emergency braking, blind-spot detection and park assist, as well as such options as night vision and surround view. 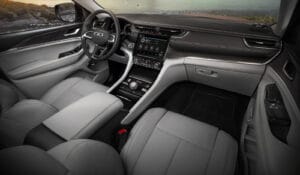 The interior comes standard with a 10-inch display screens, including a frameless digital gauge cluster and Uconnect 5 10.1-inch touchscreen radio.

The 2021 Jeep Grand Cherokee and Grand Cherokee L models ride on an all-new platform making extensive use of high-strength steels, the automaker notes.

The three-row model measures 204.9 inches, nose to tail, making it more than a foot longer than the current, two-row Grand Cherokee. It’s about 0.3 inches wider, at 77.9 inches, while standing as much as 3 inches taller, at 71.5 inches. The wheelbase comes in at 121.7 inches.

The Grand Cherokee was “born to be an over-achiever,” proclaimed Christian Meunier, the brand’s global president, during that December webinar. Nowhere is that more apparent than in its off-road and towing capabilities. With the optional V-8 engine package, the ute can handle up to a 7,200-pound trailer. And the hitch is integrated into the rear bumper, with a cover that keeps it out of sight when not in use.

The automaker claims that Grand Cherokee’s well-regarded off-road capabilities have been enhanced with the new model, especially with the trail-focused Overland model featuring special bumpers designed to maximize approach and departure angles. Depending on the model, Grand Cherokees equipped with the Quadralift air suspension can choose from five height settings raising the SUV as much as 10.9 inches, giving it a maximum 24-inch water-fording depth. 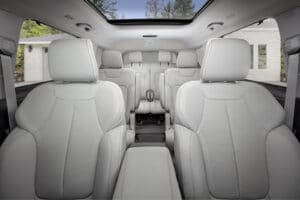 Buyers have the choice of two powertrains, starting with the all-aluminum 3.6-liter Pentastar V-6 engine, rated at 290 horsepower and 257 pound-feet of torque. There’s also a 5.7-liter V-8 rated at 357 hp and 390 lb-ft. Both engines are mated to an eight-speed automatic.

(Coming Soon: The full reveal of the Jeep Wagoneer and Grand Wagoneer?)

Jeep isn’t ready to price the all-new Grand Cherokee and Grand Cherokee L models, but the current base, two-row model starts at $32,150. Considering all the new equipment and the general, upward pricing trend in the industry, expect to see that go up by the time the first of the new models reaches U.S. showrooms during the second quarter of this year.