GM Teams with Navistar in Push for Emission-Free Vehicles

General Motors has been banging the drum for electrification pretty consistently for the past 12 to 18 months, rolling out a slew of new vehicles and upping its investment from $20 billion to $27 billion between now and 2025.

However, the company’s commitment to eliminate tailpipe emissions from its own vehicles by 2035 isn’t limited to just the production of battery-electric vehicles. The automaker is working in concert with heavy-truck maker Navistar Inc. and OneH2 to develop fuel cells as well.

(Cummins, Navistar to team up on fuel-cell truck development.) 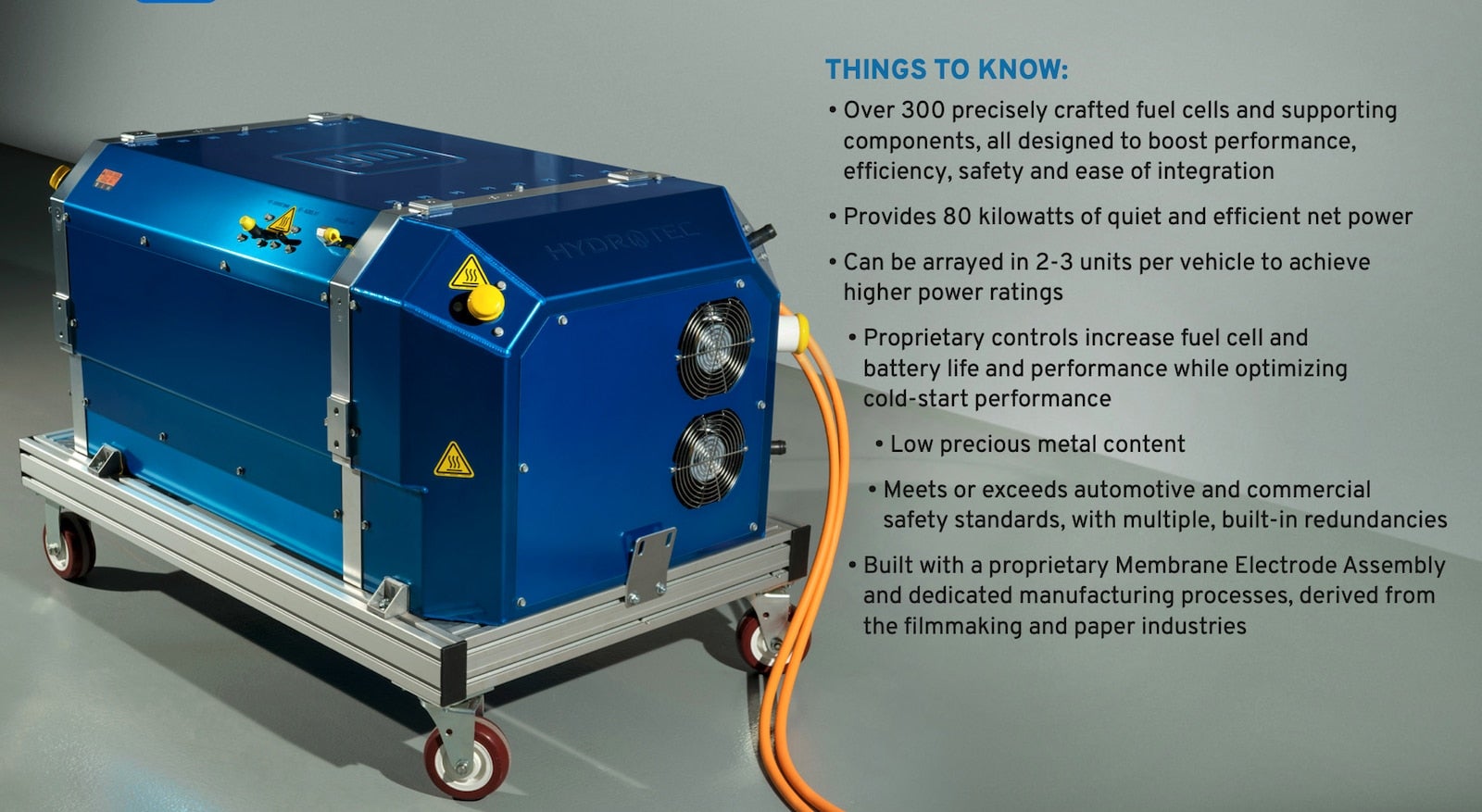 “GM’s vision of a world with zero emissions isn’t limited to passenger vehicles. We believe in EVs for everyone,” said Doug Parks, GM executive vice president of Global Product Development, Purchasing and Supply Chain, in a statement.

“We’re thrilled to work with like-minded companies like Navistar and OneH2 to offer a complete solution for progressive carriers that want to eliminate tailpipe emissions with a power solution that can compete with diesel.”

The program calls for Navistar to create a completely emissionless pilot vehicle to be used in a long-haul environment. J.B. Hunt Transport will put the first test truck through its paces. That truck will use GM’s power cubes.

Each Hydrotec power cube contains 300-plus hydrogen fuel cells along with thermal and power management systems. The power cubes are compact and easy to package and can be used in a wide range of applications, including marine, earth-moving and mining equipment, locomotives and power generators.

This program is a nice second run at hydrogen fuel cells for heavy trucks after its ill-fated move late last year to try to partner with Nikola. Prior to that, GM and Honda formed a joint venture in 2017 to develop fuel cells. 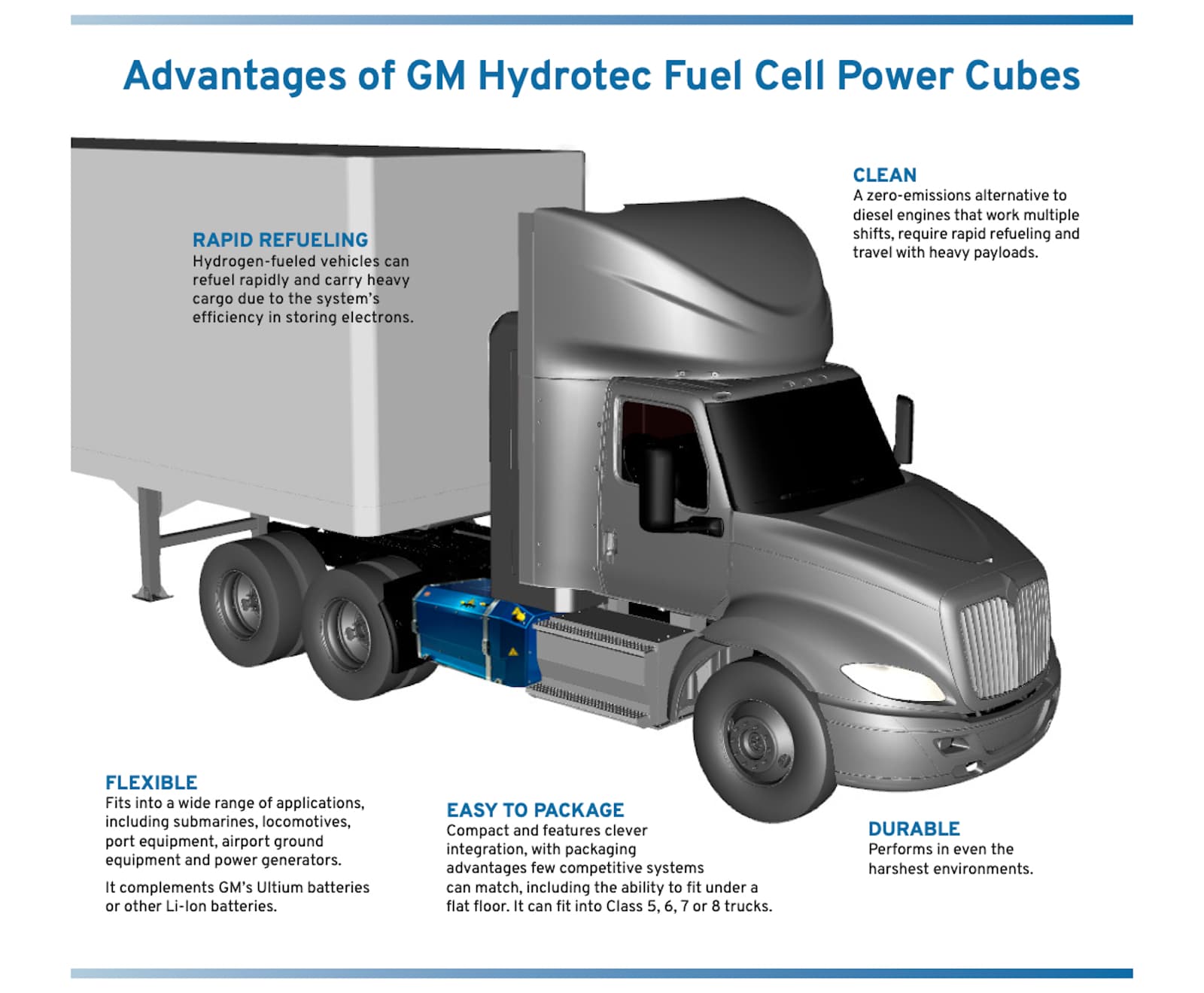 In the case of the tie-up with Navistar, the test vehicles are expected to begin the pilot phase under the new, complete solution at the end of 2022. The integrated solution will be competitive with other powertrain offerings with a target range of 500+ miles and a hydrogen fueling time of less than 15 minutes. The goal, according to Navistar, is get a production mode of the International RH Series ready for customers for the 2024 model year.

“We are excited to provide customers with added flexibility through a new hydrogen truck ecosystem that combines our vehicles with the hydrogen fuel cell technology of General Motors and the modular, mobile and scalable hydrogen production and fueling capabilities of OneH2. And we are very pleased that our valued customer J.B. Hunt has committed to utilize the solution on dedicated routes and to share key learnings.”

(GM and Honda teaming up on U.S.-based fuel cell manufacturing.)

OneH2’s role is to supply a hydrogen fueling solution, which includes hydrogen production, storage, delivery and safety. In addition, Navistar is taking a minority stake in OneH2. Through its affiliates, OneH2 plans to kickstart substantial hydrogen heavy truck refueling infrastructure by incorporating more than 2,000 International RH Series FCEVs into existing truck fleets in the near term.