After pleading guilty to stealing trade secrets, he spends no time in jail.

The list of 144 people granted pardons or commutations for their criminal acts in the final hours of the Trump administration included a former Google engineer accused of industrial espionage for stealing trade secrets involving self-driving vehicles.

Anthony Levandowski, who was employed by Google and its self-driving car subsidiary Waymo before leaving to start his own company, was sentenced to 18 months in prison last summer after pleading guilty to a single count of stealing trade secrets, according to the U.S. Department of Justice.

The federal judge who sentenced Levandowski, however, delayed sending him to prison due to concerns about COVID-19 so he was apparently not in federal custody when the pardon from Trump arrived, meaning he avoided spending any time behind bars.

Levandowski was indicted by a federal grand jury in San Francisco in 2019 on 33 counts of stealing trade secrets from his former employer, the DOJ said. Google also filed a civil lawsuit against Levandowski, who filed for bankruptcy last year after an arbitrator ordered him to pay Google $179 million, according to court records.

The Trump White House indicated that several people appealed to the departing President on behalf of Levandowski, among them Silicon Valley executive Peter Thiel, a co-founder of PayPal, who is now a major venture capitalist. Thiel is perhaps one of the most prominent Trump supporters and financial backers in Silicon Valley and spoke at the Republican convention last summer.

“Mr. Levandowski is an American entrepreneur who led Google’s efforts to create self-driving technology. Mr. Levandowski pled guilty to a single criminal count arising from civil litigation. Notably, his sentencing judge called him a ‘brilliant, groundbreaking engineer that our country needs.’ Mr. Levandowski has paid a significant price for his actions and plans to devote his talents to advance the public good,” the Trump White House said as an effort to explain the pardon.

For his part, Levandowski wrote a unique chapter in the unfolding story surrounding autonomous vehicles.

The 40-year-old Levandowski, according to DOJ records, worked in Google’s self-driving car program for seven years. According to the plea agreement he signed, he acknowledged that during this time, he was aware his employment agreement required that he keep Google’s valuable non-public information confidential.

(Levandowski files for bankruptcy as he faces $179 million arbitration fee.)

While Levandowski was considering leaving Google, and prior to his departure in 2016, he obtained and stored thousands of files from an internal, password-protected Google server known as “SVN,” He then transferred the SVN files from his Google-issued laptop to his personal laptop.

Within months after his departure from Google, he created a new company to develop a self-driving truck that was then purchased by Uber.

Among the files downloaded between October 2015 and January 2016, was an internal tracking document entitled “Chauffeur TL weekly updates – Q4 2015.” The update contained details about the status of Google’s self-driving car program. Levandowski admitted downloading the file with the intent to use it for the benefit of himself and Uber and that he accessed the document after his resignation from Google, the plea agreement noted. 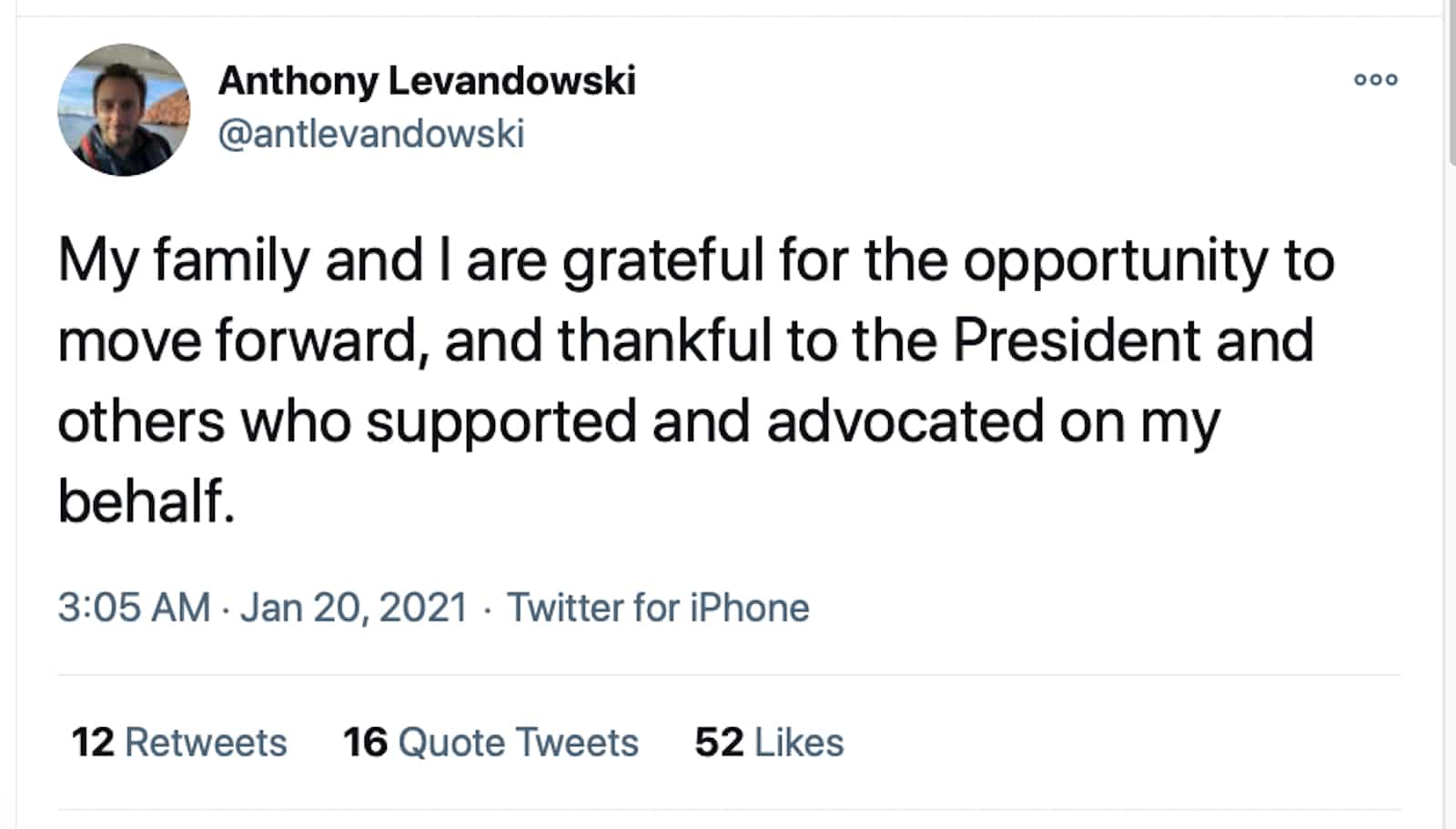 Levandowski acknowledged the document qualified as a trade secret. In sum, he admitted a reasonable estimate of the loss attributed to his conduct is up to $1.5 million, the plea agreement said.

As Google’s civil suit began, Levandowski resigned from Uber. Uber’s autonomous vehicles unit floundered after one its test car was involved in an accident in which a pedestrian was struck and killed.

At the end of last year, Uber’s self-driving unit was sold to Aurora, a company developing autonomous vehicle technology that was founded by one of Levandowski’s former Waymo colleagues, Chris Urmson.

Trump’s other last-minute pardons and commutations also included former Detroit Mayor Kwame Kilpatrick, who was serving a 28-year sentence for public corruption. The former President also pardoned a former aide, Steve Bannon, who was accused of fraud, and Elliot Broidy, a former fund Trump fundraiser, who was accused of taking money from China and Malaysia in return for political favors.