“Not just any truck,” hints founder and CEO.

Even though the company’s first model, the all-electric Ocean SUV, is still more than a year from production, Fisker’s eponymous founder and CEO Henrik Fisker is already hinting at products set to follow, and a new tweet suggests that a “lifestyle” focused pickup is in the works.

The Danish-born executive actually hinted that a truck was one of the models Fisker was considering, but the new design, revealed in a tweet, is a lot more “radical” looking than the Alaska pickup concept shown previously.

Coming up with an edgy design aimed at “lifestyle,” rather than work users might be a logical step considering just how quickly the all-electric pickup market is set to get crowded. Along with highly anticipated offerings such as the GMC Hummer, Tesla Cybertruck and Ford F-150 EV, as many as nine other battery-powered pickups now are under development by both traditional manufacturers and new, EV-focused entrants. 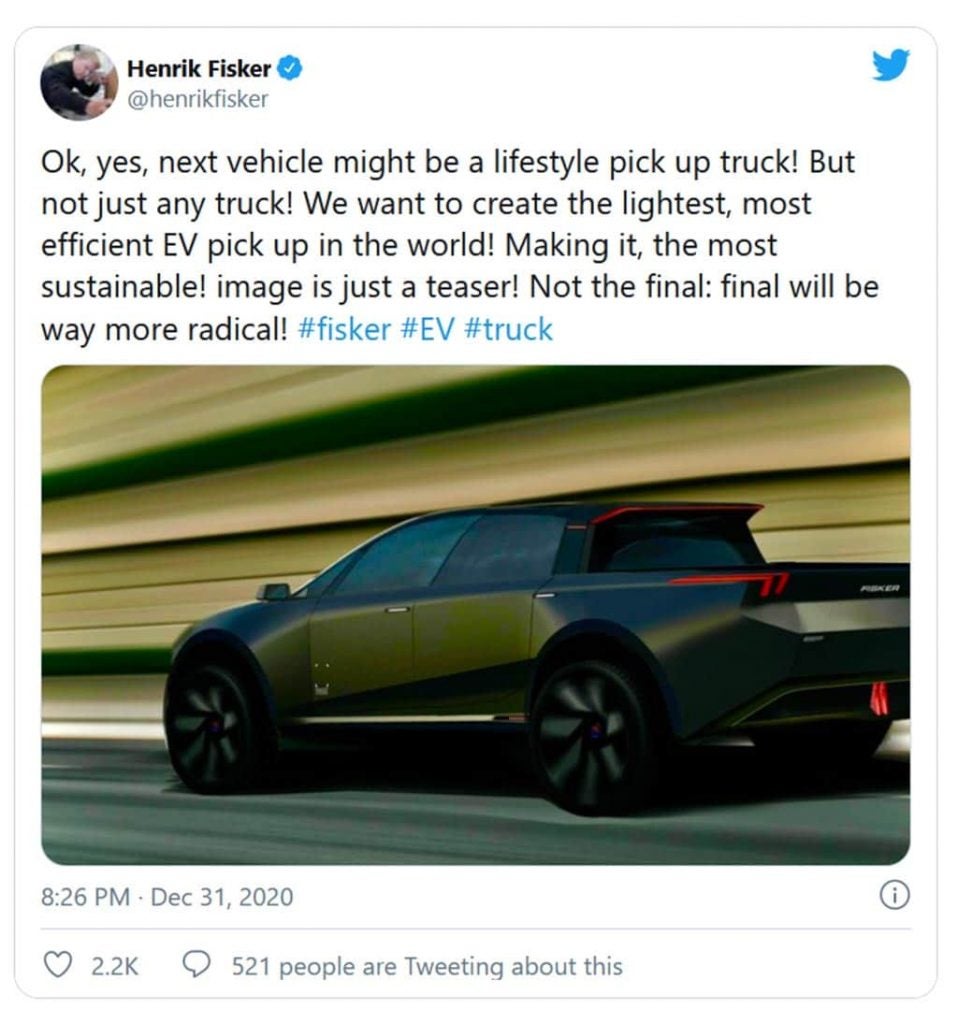 “Ok, yes, next vehicle might be a lifestyle pick up truck! But not just any truck! We want to create the lightest, most efficient EV pick up in the world! Making it, the most sustainable! image is just a teaser! Not the final: final will be way more radical!” the long-time designer-cum-entrepreneur tweeted.

An early pioneer in electrification – though his first firm, Fisker Automotive, went through a spectacular meltdown nearly a decade ago – Henrik Fisker continues to bet big on the battery-car market.

And he has a lot more resources this time around, his new company going through a 10-figure SPAC deal, often called a reverse merger, that got it listed last autumn under the stock ticker “FSR.”.

Around the time the deal closed, Fisker offered a broad hint at what he had in mind, tweeting the company is “planning a portfolio expansion to a four-vehicle range by mid-decade,” with seven longer-term. “The four-vehicle line-up will feature the Ocean SUV, a segment busting super-sports sedan based on the EMotion concept, a sports crossover, and a pickup truck.”

Fisker offered a hint of what might be in the works with an image tweeted out showing a pickup it dubbed the Alaska. The image was quickly removed.

(With a flood of new products coming, 2021 could be the year EVs finally gain critical momentum.)

For now, it’s unclear whether that will rename the name of the truck with its new design. The only visible badge in the new rendering says, “Fisker.”

What does seem apparent is that the company doesn’t plan to go up against full-size EV trucks like the Hummer, Cybertruck or F-150 EV, but instead wants to go smaller and targeted buyers who want a pickup that they can use for lifestyle, rather than work, purposes.

That might mean to go off-roading, haul a mountain bike or an ATV, or to pick up the occasional load of mulch at the local garden store.

The rendering makes the four-door Fisker pickup look like it falls into the midsize class, along the lines of a conventionally powered Chevrolet Colorado or Toyota Tacoma, but it might run a bit smaller, more on the order of the Hyundai Santa Cruz that is finally expected to reach market sometime in 2021.

(Fisker and Magna lock down manufacturing and investment deal.)

What Fisker does make clear is that it will be all-electric. But, even then, there are plenty of blanks. Early on, Fisker was set to develop its own EV platform and driveline, at one point hinting it might even use a futuristic ultracapacitor energy storage system. It later was switched to a conventional lithium-ion battery pack.

Then, in 2019, the company announced it would partner with another automaker willing to let Fisker use its electrified platform. It broadly hinted that would partner it with Volkswagen, the Ocean SUV to ride on the same skateboard-like platform as the new VW ID.4. But, a few months back, the project took yet another turn.

The Ocean now will be based on an electric architecture developed by Canadian mega-supplier Magna International. And the SUV will be assembled at a Magna facility in Graz, Austria.

“The next 2 EVs (will be built) on the same platform,” Fisker last year tweeted. But Henrik Fisker also told TheDetroitBureau.com that his company might partner with other manufacturers for the underpinnings of other planned products.

To answer another question: the likelihood appears to be that a Fisker pickup, whatever it is called, and whatever underpinnings it uses, likely won’t reach market until 2025 – if at all. There are plenty of skeptics and the start-up has yet to prove it can get its first model, the Ocean, out onto the market.