Audi brand amps up its own electrification efforts.

Rapidly shifting resources to its electrification program, Volkswagen announced Tuesday that it will effectively end its long ties to the racing world by closing down VW Motorsports GmbH.

Funding for that program, along with its 169 employees, will be diverted to development of electric vehicles – an effort to which VW previously said it would devote $86 billion through mid-decade. The world’s largest automaker plans to bring to market at least 50 all-electric models by then through its various brands.

That includes the semi-autonomous Audi division which on Tuesday released its own five-year spending plans. Audi previously indicated it would itself invest about 10 billion, or $12 billion, euros in electrification. It now says it will spend that much on pure battery-electric vehicles, with another 5 billion euros, or $6 billion, going to develop hybrid products.

(VW ID Space Vizzion gets a go for launch.)

“The Volkswagen brand is on its way to becoming the leading provider of sustainable e-mobility. To this end, we are pooling our strengths, and we have decided to terminate the Volkswagen brand’s motorsport activities,” Frank Welsch, the head of the automaker’stechnical development efforts, said in a statement. 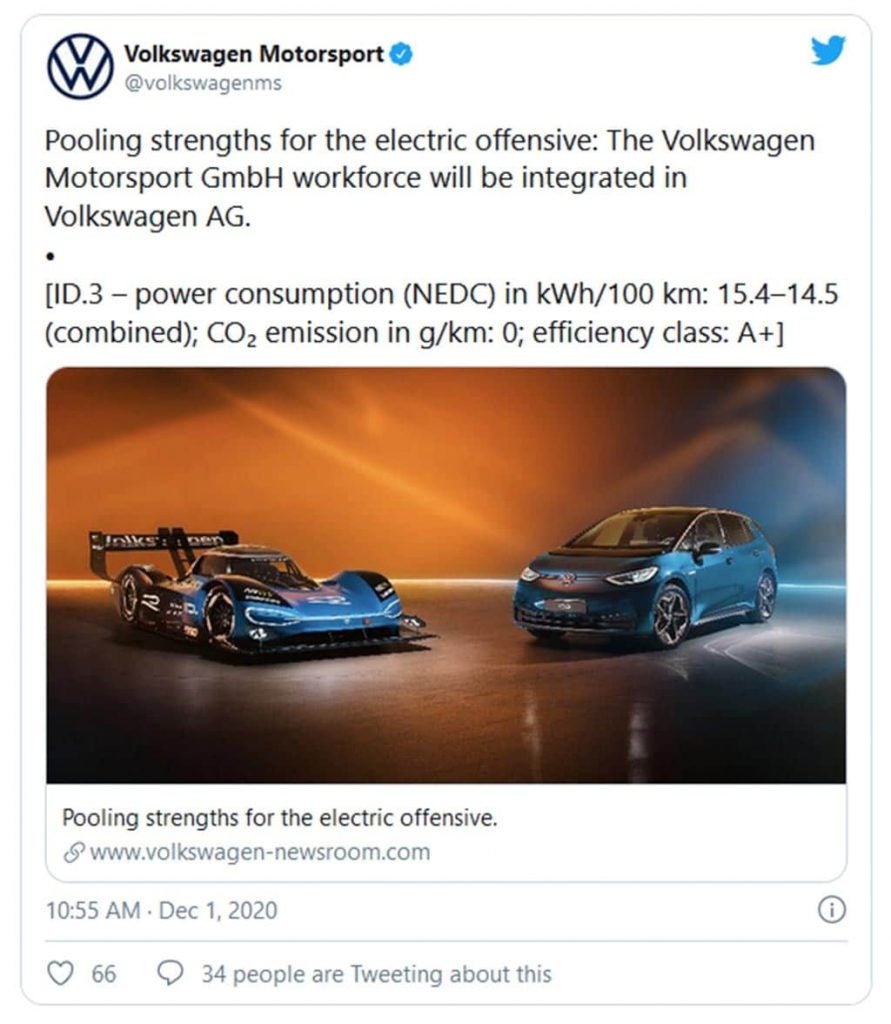 Separately, a Tuesday morning tweet said, “Pooling strengths for the electrification offensive: The Volkswagen Motorsports GmbH workforce will be integrated in Volkswagen AG.”

The automaker says none of the racting team will lose their jobs and will, instead, be offered the opportunity to move from Motorsports headquarters in Hanover to VW’s global HQ in Wolfsburg. It remains to be seen how many will take up that offer. There could be some direct transfer, however, as a centerpiece of VW’s recent racing program was its all-electric ID.R model.

The German automaker long relied on diesel technology to meet its emissions and fuel efficiency targets. That strategy collapsed when, five years ago, it was revealed that VW had cheated on its diesel emissions, triggering a backlash eventually costing it more than $30 billion in fines, repairs and repurchases.

(VW’s U.S. CEO has seen the future, and it’s all about SUVs and BEVs.)

That also led to a management shake-up that saw former VW exec Herbert Diess named Volkswagen AG CEO. He has made the shift to electric propulsion the foundation of his tenure.

That covers the entire enterprise. The Volkswagen Group’s high-line Bentley brand soon “will be fully electric,” according to its CEO Adrian Hallmark. “By 2030, no more combustion engines,” he announced last month.

Few expect Volkswagen to walk away from performance. With their ability to produce tremendous, off-the-line torque, the automaker is expected to launch sporty versions of future battery-electric vehicles like the ID.4 which is set to become its first long-range model in the North American market early next year.

And that’s where the knowledge learned through the ID.R program could come in handy. But, at least for now, even that racing effort is being scrubbed, along with the VW brand’s World Rally Championship, or WRC, effort.

It remains to be seen if all the brands under the Volkswagen Group will follow the lead of the namesake VW division. Audi has cut itself out of both DTM and World Endurance Championship, as well as the all-electric Formula E, but will spend at least the 2021 season in the Dakar Rally. Porsche also left the WEC. But it is one of several automakers that recently joined the increasingly popular Formula E series. It has not said whether it will retain that effort after the coming year.