While lithium-ion batteries have improved significantly since the technology went into automotive production a decade ago, they still fall short of what some experts believe will be needed to make electric propulsion truly competitive with the internal combustion engine, at least until a true breakthrough comes along.

Now, however, decade-old research company QuantumScape finds itself in the spotlight as it rolls out a new technology that could substantially boost power – and range – enough to make battery-drive systems viable not only for automobiles but also for aircraft. Its claims have won over the backing of Volkswagen AG, the German automaker planning to invest nearly $90 billion on electrification.

But QuantumScape may soon face competition, a report from Japan suggesting that Toyota could have similarly significant news to announce soon regarding its own solid-state research program.

Silicon Valley-based QuantumScape is just one of many startups looking to take solid-state batteries out of the research lab and put it on the road. But it appears to be at the head of the pack in terms of not just packing in more electrons in a given mass, but also in terms of delivering a battery design that can be readily manufactured in volume – and survive within the demanding automotive environment for a reasonable length of time.

“Electric vehicles are here. The future is solid,” boasts QuantumScape on its website. The company has been working quietly on the technology for a decade, but it has found itself gaining plenty of attention since it went public last month as part of a merger with the special purpose acquisition company, or SPAC, Kensington Capital Acquisition Corp.

Quantum’s technology is a “game-changer,” said Justin Mirro, the CEO and chairman of Kensington Capital, during a webinar hosted by the Society of Automotive Analysts on Thursday.

Conventional lithium-ion batteries use a liquid slurry that both allows them to store and deliver current but also creates a variety of problems. Among other things, it limits energy density – the number of electrons that can be squeezed into a given mass. It slows charging times. And it is prone to catch fire if a battery is ruptured.

Solid-state batteries replace the liquid with, as the name implies, a solid material. Researchers have played with a variety of different alternatives, including ceramics and polymers, but they have their own problems. Some are difficult to mass produce, while others can’t live long outside the research lab.

QuantumScape claims to have found a way to overcome both challenges. It won’t reveal the details of the materials it is using except to say that it has adopted a lithium-metal anode, an approach other companies on the forefront of solid-state technology also are pushing to develop.

(Mercedes set to become first manufacturer to put solid-state batteries on the road.)

In a statement released this week, QuantumScape founder Jagdeep Singh provided data indicating the technology can deliver 300 miles or more of range, get an 80% charge in just 15 minutes, resists fires and last for at least 150,000 miles in real-world use.

The technology, the company claims, also can be mass-produced – and a significantly lower cost than even the targets being set for conventional lithium-ion batteries by companies like Tesla, Panasonic and the Ultium joint venture between General Motors and LG Chem.

Like other analysts, the Boston Consulting Group has forecast that the real breakthrough for battery power will come when the cost per kilowatt-hour reaches $70, or about half of what conventional lithium cells cost today.

There are yet other advantages, solid-state batteries are able to accept energy more quickly. That means they can recapture more energy while a vehicle is braking, further extending range. And they are substantially lighter than today’s batteries. Packing in so much more energy per kilogram that they could become a viable alternative for the aerospace industry. That’s particularly significant for the nascent air taxi business. 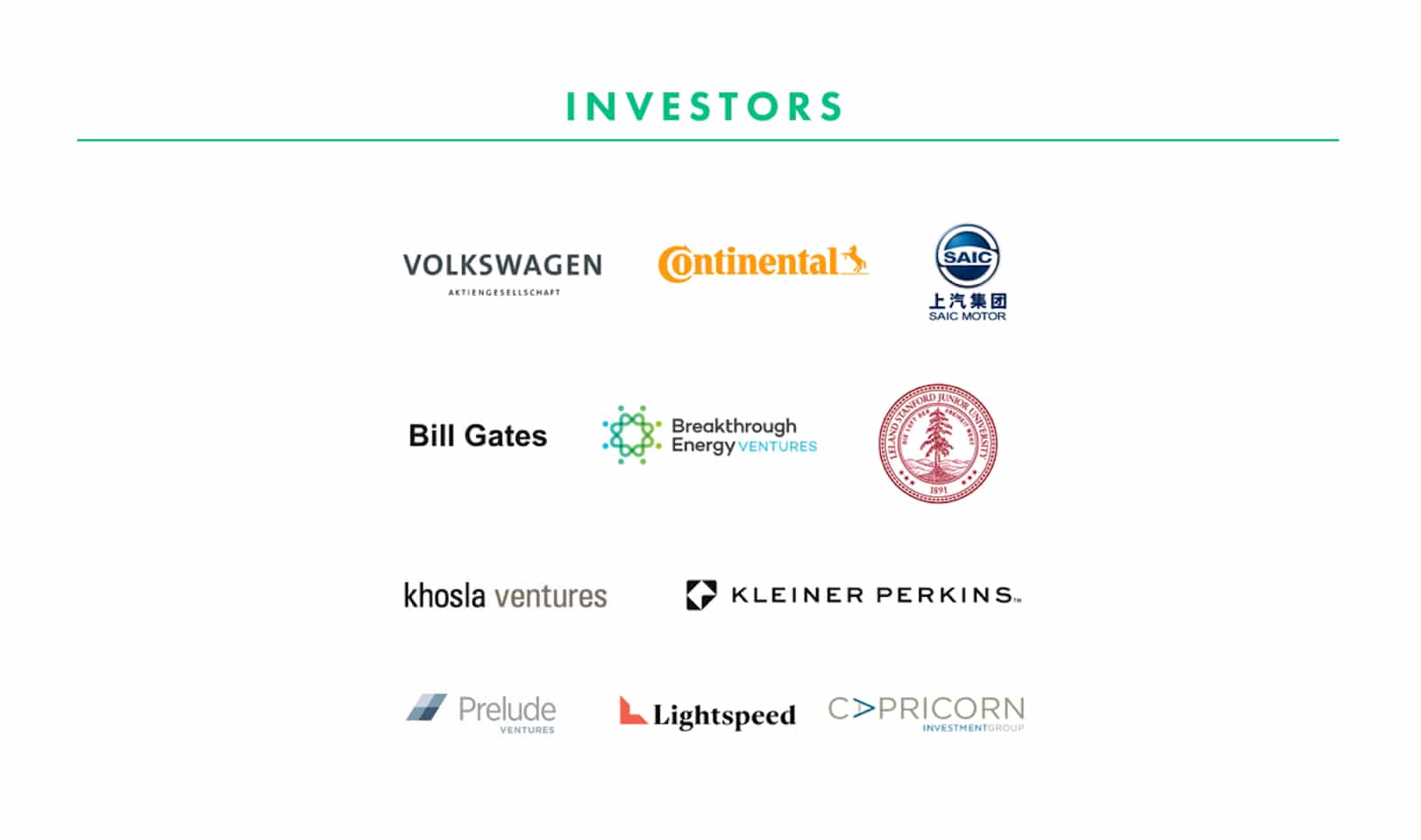 “Electric aviation starts to look a lot more attractive and viable when you have this kind of energy density and power,” wrote J.B. Straubel, the co-founder of Tesla and now the chief executive of Redwood Materials.

The headlines have sent QuantumScape stock soaring in the past month, though it did dip a bit in recent days. The big hit came when Japan’s Nikkei reported Toyota will unveil a competing solid-state solution next year. Toyota has been reluctant to enter the battery-electric vehicle market using today’s lithium-ion batteries and has long said it wanted to wait until solid-state technology became viable.

This could mean a battle royal shaping up between the two industry giants. For its part, Volkswagen plans to invest $87 billion in EVs between 2021 and 2025, a period during which it intends to bring about 50 BEVs to market through its various brands. Initially, VW will use conventional lithium technology but it hopes to switch to solid-state batteries, when practical, and is a major investor in QuantumScape.

It will have to wait. According to QuantumScape, mass production is still four to five years away. By then, a number of other solid-state research companies, such as Solid Power and Ionic Materials, also hope to have practical solutions ready for market.