This will be a big year for Nissan, quite literally, the Japanese automaker set to reveal a new version of its biggest SUV, the Armada, on Dec. 8.

Nissan kicks up some dust with the teaser shown here, the 2021 Armada seen blasting across the desert. The reality is that we can’t make out many of the finer details but it appears the new, three-row SUV will adopt a bolder version of the trademark Nissan “V-Motion” grille, along with new headlights that are likely to go all SUV.

It’s been four years since the current-generation Armada made its debut, so its ripe for some updating. Though the exterior isn’t expected to undergo many changes, the interior is all but certain to get some welcome revisions, starting with updated infotainment technology, according to those who follow the automaker closely. 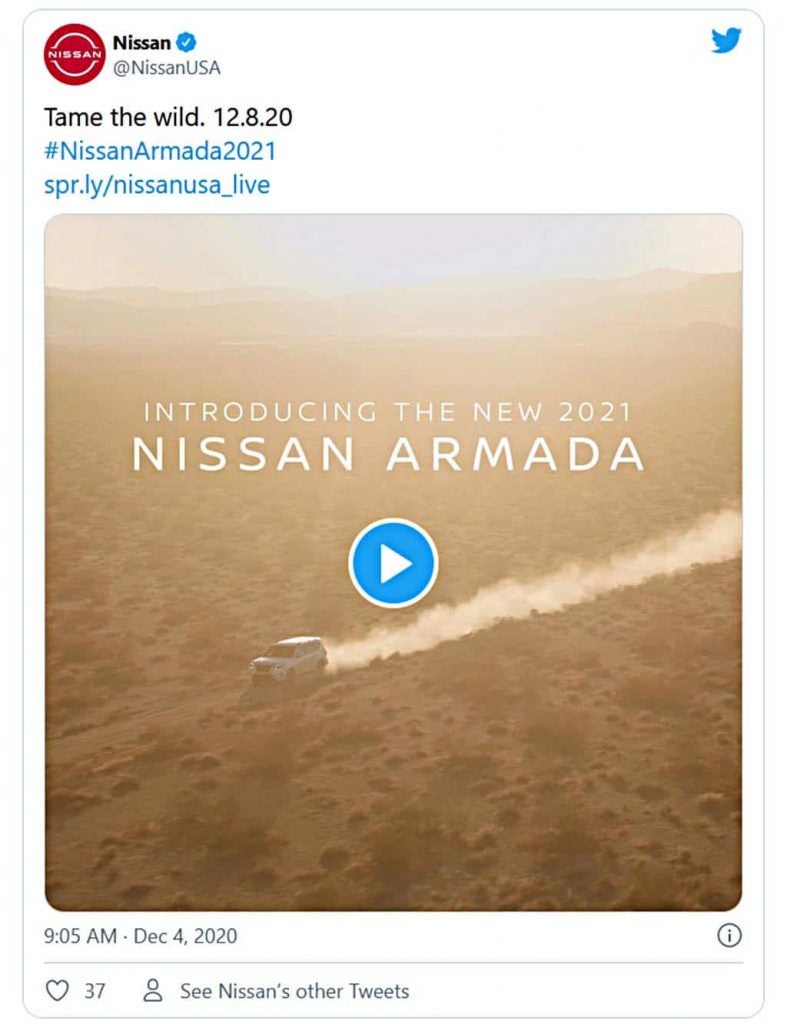 On the whole, the 2021 Nissan Armada retains its boxy shape, in line with key competitors who want to underscore their go-anywhere capabilities. That’s underscored by the choice of a desert road for this teaser image.

To get a sense of what might be in store we can look overseas where Nissan has already updated the Armada’s near-twin, the Patrol. Along with the deeper V-Motion grille, it adopts some subtle curves that will enhance aerodynamics and, in all likelihood, yield some improvements in the SUV’s otherwise mediocre fuel economy.

Like other Japanese automaker’s Nissan has been moving to electrify more of its line-up. Don’t expect to see anything in the Armada line, however, at least not initially.

All indications are that the three-row model will retain its current 5.6-liter V-8. That said, the same engine was upgraded for the 2020 Nissan Titan and so it’s reasonable to assume that it may jump from the current output of 390 to 400 horsepower. The Titan now makes 413 pound-feet of torque compared to the 394 lb-ft of the outgoing 2020 Nissan Armada.

The 2021 model year will certainly be big for Nissan, considering all the new products it’s launching. Not only does that include the full-size Armada but we’ve already gotten to drive both the new Rogue and Sentra models.

If you’d like to catch the debut of the 2021 Nissan Armada, mark your calendar for the online event that will be used to pull off the wraps on Dec. 8 at 11 a.m. EST.