Despite “Remarkable” Rebound, Auto Industry Faces Many Challenges in 2021

As the COVID crisis struck last spring, auto industry analyst began laying out dire forecasts calling for sales to plunge to Great Recession levels, sending suppliers, and perhaps even some major automakers racing towards bankruptcy. If anything, the industry has staged what one veteran has dubbed a “remarkable” recovery, sales bouncing back to the point where manufacturers can barely keep up with demand.

While the “V-shaped” recovery is expected to continue in 2021, the ongoing pandemic still raises plenty of uncertainties, according to a group of industry insiders who participated in a year-end summit sponsored by the Society of Automotive Analysts on Thursday. Among other things, these include both rising labor costs and labor shortages, strains on margins and earnings, and the need for the industry to handle the hefty cost for the growing shift to electric, as well as autonomous vehicles. 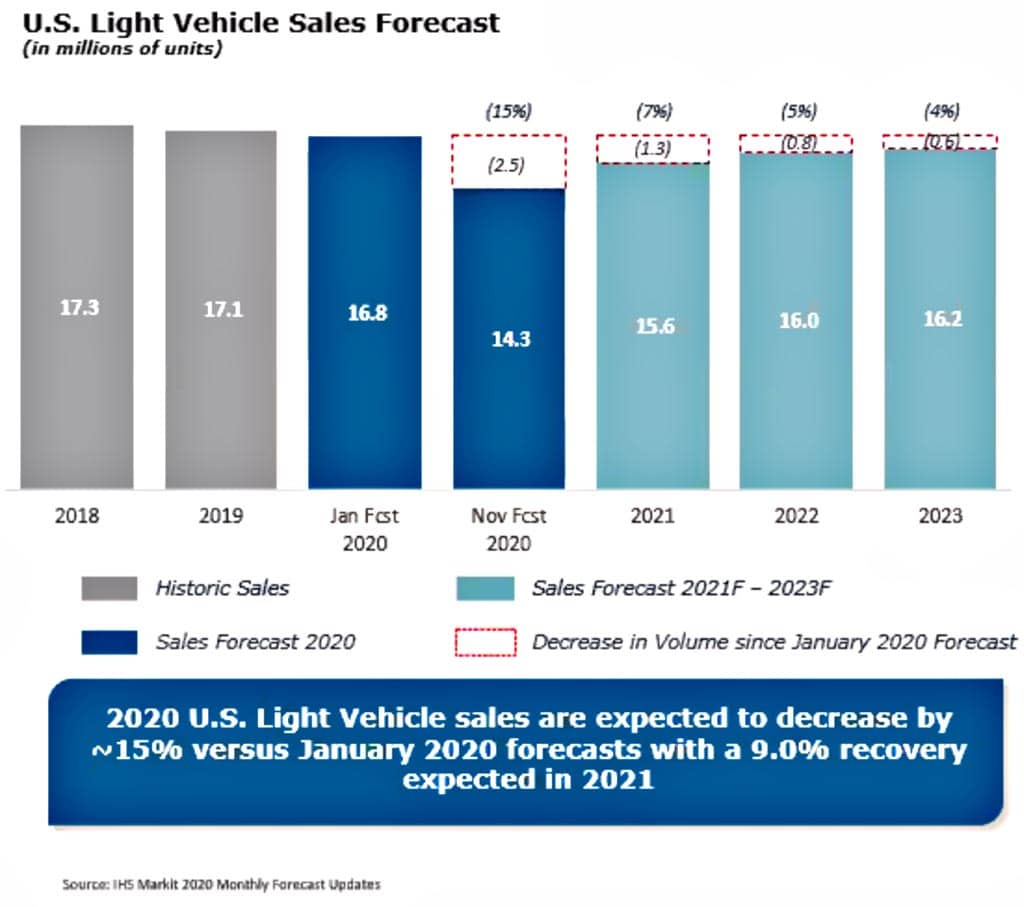 As recently as early summer, research firms like J.D. Power were forecasting U.S. sales for the year would tumble by 3.5 million compared to pre-pandemic estimates. In recent months, volume has rebounded sharply, at times exceeding prior-year levels. For all of 2020, the consensus is that volume will come in 14.3 million, or just 2.5 million below original forecasts.

Wybo sees the V-shaped recovery continuing over the next several years, with 2023 coming in around 16.2 million sales, or 0.5 million short of pre-COVID forecasts.

That said, the recovery is still likely to be a “truncated ‘V,’” cautioned FT Chong, director of PineBridge Investments, which works with an array of mid-level automotive suppliers.

Not only will it take the industry through mid-decade to fully recover – barring any further COVID problems – but the near-term industry is going to face plenty of challenges, Chung emphasized.

Perhaps the biggest problem is that manufacturers and suppliers alike are facing a surge of rising costs, the panel agreed:

Industry margins on an EBITDA basis stood at around 10% before the pandemic, the Conway MacKenzie financer noted, but could fall “three or four points” by next year.

All this comes at a time when the industry is having to pump out hundreds of billions of dollars to fund the development of electric and autonomous vehicles – technologies that still account for only a small fraction of global sales, said Justin Mirro, chairman and CEO of Kensington Capital, another major financial company that has been a strong player in the emergence of SPACs. Also known as “blank-check companies,” they’ve been used to take numerous automotive start-ups, such as Fisker and Nikola, public.

Nonetheless, “a lot of things are coming together,” for the push to electrification, Mirro said, and should see sales rise as a lot more “sexy” products come to market over the next few years.

(Impact of pandemic on auto sales is short term, not permanent, study suggests.)

The members of the SAA panel agreed that a number of things came together to keep the industry right side up during a desperate crisis. Critical was the pandemic relief program approved by Congress last spring which helped shore up consumer sentiment while also buoying businesses. Adding to that, lenders were particularly “generous and supportive,” helping prop up many suppliers who would have collapses had the financial market collapsed as had happened during the Great Recession.

There will be plenty of uncertainties to watch in 2021, said Winget. For one thing, he’ll be watching to see how automotive consumer loan portfolios hold up. Surprisingly, even though there’s a potential housing crisis in the works as millions of Americans fall behind on loans and rents, the same has not been the case in the auto world where delinquencies have been “stable or even down,” he noted.

If that holds through the coming year it should help keep the industry’s recovery on track, especially if the new vaccines just starting to be approved for distribution prove effective at bringing the coronavirus pandemic under control.

(Trade-in values on used car prices falling back to normal.)