Base model will carry a significant premium over Tesla Cybertruck.

Facing the likely blockbuster Tesla will deliver with its Cybertruck, Rivian’s newly released numbers show it will cut the anticipated cost of the R1S electric SUV and R1T pickup it plans to start delivering next year.

While originally expected to come in at $69,000, they now will start at $67,500, Rivian says. But don’t expect to find those base models at Rivian showrooms, at least not initially. The startup EV maker says both entry-level and high-end versions will come later, with the R1S and R1T first showing up in special Launch Editions starting at $75,000.

The Launch Edition models will feature a “300+” mile battery pack, exclusive badging and a unique “Launch Green” color option. It also will feature an upgraded interior and such off-road niceties as an underbody shield and onboard air compressor.

Detroit-based Rivian will be entering a market that is quickly getting quite crowded. It’s R1T will face off with the new Cybertruck which, Tesla says, will start as low as $39,900. It’s still a bit early to make an apples-to-apples comparison on pricing based on features, however, and potential buyers need to factor in the $7,500 federal tax credits available on the Rivian truck. Tesla hit a sales threshold in late 2018 that has eliminated the incentives on its products. 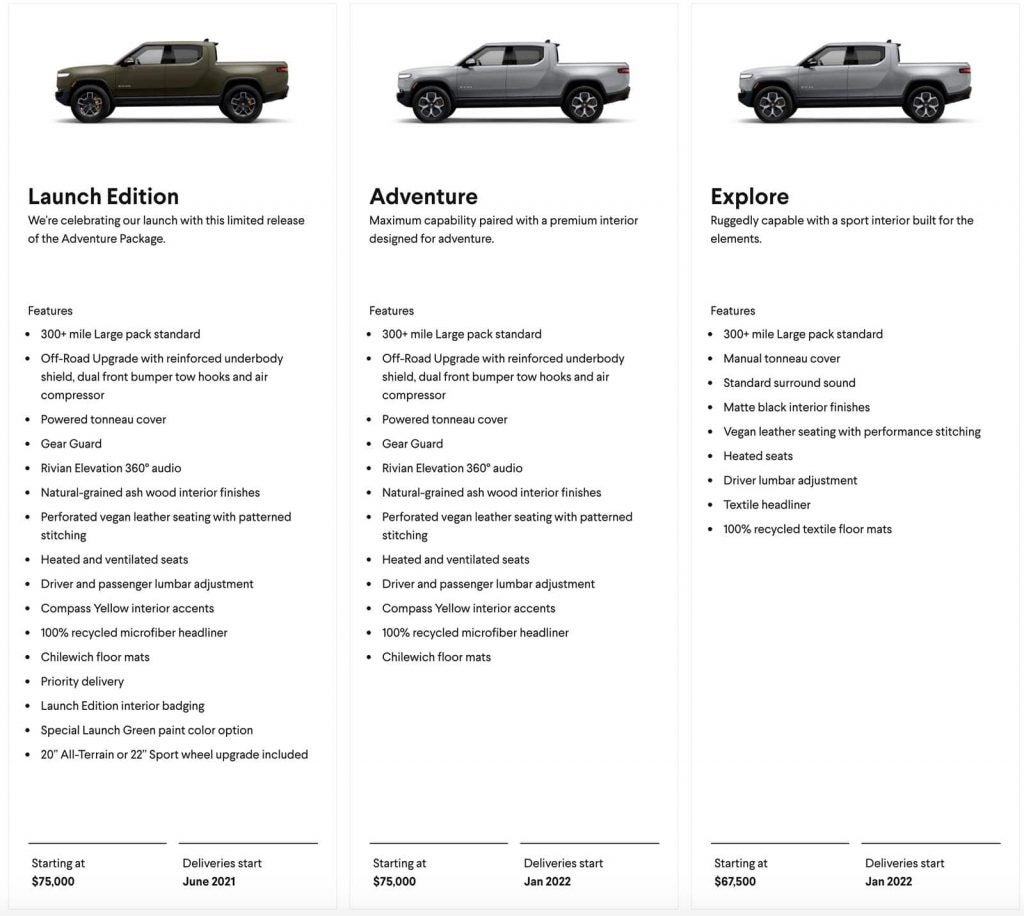 The R1T will be going into an extremely competitive market. All told, there appear to be 11 or more electric pickups on the way from start-ups that also include Bollinger and Lordstown Motors, as well as established makers such as Ram, Ford and General Motors.

And, like Rivian, the GMC brand will launch both a pickup and an SUV version of its new Hummer line. The pickup is expected to reach GMC showrooms next year. Ford will follow with its electric F-150 soon afterwards.

Rivian is expecting to have the first version of the R1T available for delivery starting next June, the R1S to follow in August.

The company is already taking preliminary reservations but, with this week’s announcement says pre-order holders will be able to start configuring vehicles starting next Monday, November 16. Among other things, they’ll be able to pick vehicle color, battery pack size, wheels and tires.

Those in a hurry will want to choose the R1T Launch Edition. Along with the off-road accessories, it will get upgraded wheels and tires, the unique “Launch Green” paint and features in the Adventure Package, such as vegan “leather” upholstery, ash wood trim and an upgraded audio system. There’ll also be a powered tonneau on the R1T.

The less well-equipped Adventure edition will launch in January 2022, according to Rivian, and also will come in at $75,000. The base Explore model will also debut in January 2022 at $67,500 and will sacrifice the off-road features, the premium audio system and the ventilated seats, for example.

Rivian will offer a number of options, most notably a choice of 105, 135 or 180 kWh battery packs delivering at least 230, 300 or 400 miles range, respectively. It’s important to note that towing and heavy loads will significantly impact the range of an electric pickup or SUV and, like all EVs, they will see the numbers drop during cold weather, as well.

Rivian is one among many battery-car start-ups but it has gotten a significant boost after forming alliances with both Ford Motor Co. and Amazon. The online retail giant plans to purchase 100,000 all-electric Rivian delivery vans for its Prime service over the course of the coming decade.