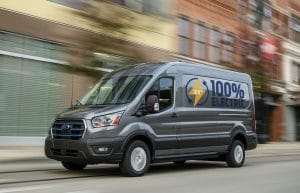 Ford reveals the 2022 E-Transit – an all-electric version of the world’s best-selling cargo van – which is set to begin production in late 2021.

Ford is looking to its leverage its role as the top seller of cargo vans into to becoming the leader in electric commercial vehicles with the introduction of the new 2022 E-Transit van.

Officials noted the new van will start around $45,000 and production is expected to begin late in 2021. It will be built at the company’s Kansas City Assembly Plant. The company didn’t reveal much about the performance of the van but did note the low-roof version will travel 126 miles on a charge. 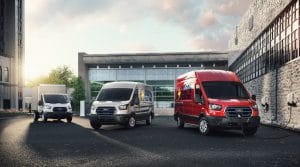 Ford is offering three iterations of the new electric Transit.

Although doesn’t seem like much, officials noted the vans are typically used for short “intense” delivery routes. The van’s electric motor puts out 266 horsepower and 317 pound-feet of torque. It’s expected to have a maximum payload of up to 4,290 pounds, depending up on the version.

It can also be outfitted with the Pro Power Onboard mobile generator, which debuted earlier on the 2021 Ford F-150, so it can be used on job sites. Ford designed the new Transit to be just like the “regular” van with the same cargo space and connection points as the gas-powered model.

Just as importantly, the all-new E-Transit can use the company’s 1,800-plus global commercial vehicle dealers, including 645 commercial vehicle centers across the U.S. for sales and service for most issues. In the U.S., about 90% of those dealers are electric vehicle-certified.

“Ford is North America and Europe’s commercial truck and van leader, so the transition of fleet vehicles to zero emissions, especially for the fast-growing last-mile delivery segment, is critical to achieve our carbon neutrality goal by 2050,” said Jim Farley, Ford president and CEO. 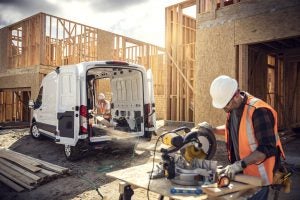 The new E-Transit can be equipped with the Pro Power Onboard mobile generator.

“Ford is ready to lead the charge, starting with the all-electric Transit and all-electric F-150 on the way. This is good for the planet and a huge advantage for customers to help lower their operating costs and provide connected fleet management technologies that will help their businesses.”

Further, he said the new van is just the latest demonstration of the company’s push to become a global leader in reducing carbon dioxide production, noting its agreement to meet California’s more stringent emissions requirements and its “proud” support of the Paris Climate Agreement.