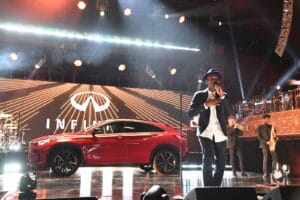 Infiniti used a showy debut, complete with a performance by recording artist Aloe Blacc, to announce the debut of the new QX55.

It’s been nearly two decades since Infiniti rolled out its first two crossover-utility vehicles, the innovative FX and EX models. A lot has happened since then and, if anything, Nissan’s luxury brand has slipped into the shadows. But now, it says, it’s betting “the spotlight shines brightly” on the all-new QX55.

As it did with those original models, Infiniti wants to be seen as the CUV design leader with the launch of the new, coupe-like QX55. But the automaker emphasizes that its looks are more than just skin deep, the 2021 crossover adding a variety of appealing features, including the brand’s Variable Compression Turbo engine which sends power to all four wheels.

“We set the stage nearly 20 years ago with the FX, and the all-new Infinit QX55 brings us back, close to the soul of our brand — and it propels us forward,” said brand boss Peyman Kargar. “The inspired QX55 is an important step in our journey.” 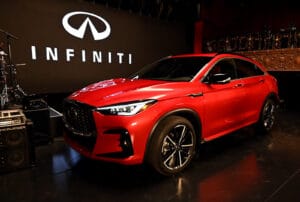 Nissan’s luxury brand is looking to step back into the limelight with the new QX55.

While the QX55 shares underpinnings with the current Infiniti QX50 model, it takes the brand’s design language forward, even while picking up some of the cues first seen on the original FX model launched in 2003.

The overall look is low, wide and sporty, with a well-planted feel to the five-door QX55. Riding on a 110.2-inch wheelbase, the CUV stretches 186.3 inches, nose-to-tail, with extremely short overhands, front and back. The new model is 74.9 inches wide and stands 63.8 inches just behind the crest of its steeply raked windshield, though the fastback roofline falls off quickly.

The double-crest grille is framed in chrome and bears a large take on the familiar Infiniti logo. It’s framed by slit-like “human eye” headlamps, with LED signature lights meant to mimic eyebrows. All lighting on the QX55 is LED, including the foglamps framed by gloss black accents. A deeply sculpted clamshell hood flows into broad and muscular quarter panels.  The rear glass is also steeply raked to complement the roofline, a black spoiler adding a design touch that also serves a functional purpose enhancing the crossover’s aerodynamics.

The sporty impressions is completed by low-profile 20-inch wheels and tires. 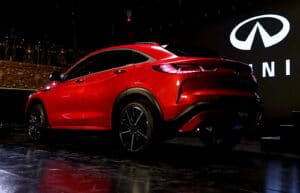 “Recalling the past while looking toward the future is what inspired us to create the new Infiniti QX55,” said Senior Vice President of Global Design Alfonso Albaisa. “Some SUVs try to deliver something to every buyer; we wanted to deliver a QX55 that can be everything to really passionate buyers.”

As aggressive as the exterior design might appear, Albaisa said the goal was to create a more calming interior space, with a low dash offering great forward visibility. There are heated “zero-gravity” front seats on all grades, a design the automaker claims can reduce fatigue on long drives. The cabin can be finished in leatherette, leather, or premium semi-aniline leather. Second-row seats get up to 38.7 inches of legroom and can slide fore-and-aft up to six inches.

Adding to the sense of calm, the QX55 features noise-reducing laminated glass, as well as Active Noise Cancellation. But, under aggressive driving, its Active Sound Enhancement system kicks in so you can better hear that VC-Turbo engine. 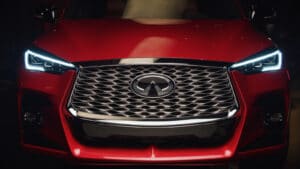 The 2021 Infiniti QX55 shares that 2.0-liter turbo-four drivetrain which delivers 268 horsepower and 280 pound-feet of torque.

The more traditional QX50 was the first production vehicle to offer an engine that could change its compression ratio on the fly, an approach that helps deliver both improved performance and better mileage. The 2021 Infiniti QX55 shares that 2.0-liter turbo-four drivetrain which delivers 268 horsepower and 280 pound-feet of torque through a continuously variable transmission. The CVT can mimic conventional step gear automatics and can do with a tap of the CUV’s paddleshifter. It also rev matches on downshifts. All-wheel-drive is standard on all versions of the QX55.

The QX55, Infiniti notes, comes with a broad range of digital safety technologies and driver assistance systems, including the latest version of the brand’s ProPilot Assist which can help a driver steer, accelerate or even brake under certain conditions. There’s also an available 9-inch head-up display, a WiFi hotspot and a number of USB ports.

Look for the 2021 Infiniti QX55 to arrive in U.S. dealer showrooms next spring. The automaker won’t release pricing until closer to that point – but the new coupe CUV is expected to start in the low $40,000 range.