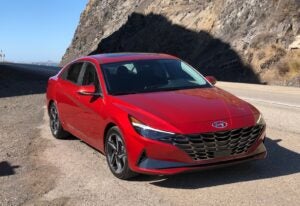 The 2021 Hyundai Elantra makers the brand a top competitor in the compact car segment.

With the arrival of the 2021 Hyundai Elantra, Hyundai has definitively proven it’s out for blood from compact car kings Honda and Toyota.

If you need proof of how far Hyundai has come since arriving on these shores in 1985, you need only look at the first-generation 1990 Elantra when considering the redesigned seventh-generation 2021 line-up. Where once the company carefully copied the industry norm, stylists are now confident enough to push boundaries, so much so that the styling of the new Elantra stands apart from its competition and breaks new ground.

(Hyundai goes online during the pandemic to reveal 2021 Elantra.) 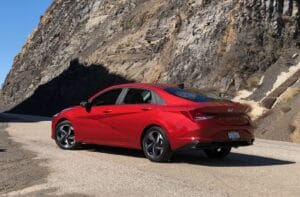 With a fastback silhouette, the Elantra looks long and lean. It’s an aggressive look that helps set it apart.

Exterior: “This car doesn’t have a great proportion,” said Davis Lee, who oversaw the exterior design of the new Elantra. “It’s a front-wheel drive proportion, you’ve got to fit five people comfortably in here, so we had to come up with different surfacing, different language that could that could catch the eyes of the customers.”

This explains the sedan’s fastback silhouette, and the many design details meant to visually lengthen the car’s appearance. But the car also marks Hyundai’s first attempt at integrating the headlamps and grille into a single design statement — a breakthrough finally realized on the upcoming 2022 Hyundai Tucson.

The striking new design comes from stylists who know the difference between going over the edge and approaching it. That’s particularly true of the Elantra’s styling, which takes trapezoids and triangles and uses them aggressively to stand apart in the crowded compact sedan segment. But unlike Toyota, where creases and shapes are often haphazardly applied, Hyundai has used them to good effect, although some buyers may still be put off.

“… We want to break the norm of car design; we want to do something different; we have to. Hyundai is not a brand known for its unique identity, so we have to shape our own identity, which shows …”

It’s a brave decision, as many will like the design, although some may find it too far outside of the bland compact car norm. 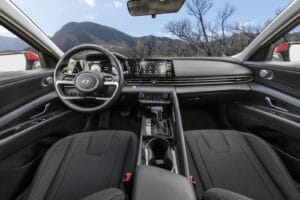 The interior of the new Elantra and the Elantra hybrid is focused on the driver.

Interior: The cabin’s overall appearance is clearly designed to resemble upmarket products, although the materials are class appropriate. Two screens, a digital instrument cluster and an infotainment screen are visually united under one piece of glass, angled toward the driver. It’s nestled above three horizontal chrome strips that visually widen the interior and house the climate control vents, similar to a design used in Genesis models.

Just below that are a simple row of buttons and a volume knob for the infotainment. Climate control is below that, as is a wireless charging pad, which not only charges your phone, but also is essential if you’re using Hyundai’s new SmartKey feature. (More on that in a moment.) The infotainment system is cleanly designed and easy to understand and operate. All parts of the screen can be reached easily from the driver’s seat.

Powertrain: All Elantra sedans are front-wheel drive. SE, SEL, and Limited models are powered by a 2.0-liter Atkinson Cycle four-cylinder engine and a continuously variable transmission that produces 147 horsepower and 132 pound-feet of torque.

Elantra SEL and Limited Hybrids receive a 1.6-liter Atkinson Cycle 4-cylinder engine and a 6-speed dual-clutch transmission teamed with a 32kW electric motor to generate 139 horsepower and 195 pound-feet of torque. As you’d expect, the Elantra’s 35-37 mpg combined EPA estimate is good, but not as good as the 50-54 mpg returned by the Elantra Hybrid. 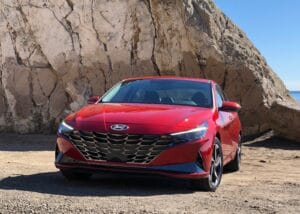 The Elantra is powered by a 2.0-liter Atkinson Cycle four-cylinder engine that produces 147 horsepower and 132 pound-feet of torque.

The 2021 Elantra is equipped with a standard 8-inch touchscreen with wireless Apple CarPlay and Android Auto, and HD Radio; a 10.25-inch screen, Hyundai’s Blue Link Connected Car System with three years of Blue Link services, Qi wireless charging, and an eight-speaker Bose audio system are optional. Hyundai’s new SmartyKey feature allows you to use your smart phone to unlock and start the car, rather than the car’s key fob.

Driving impressions: Hyundai’s ambitions with the Elantra can be seen in their product line, which includes a mainstream four-cylinder sedan, more powerful high-performance N models, and gas-electric hybrids. Conferring with a colleague from TheDetroitBureau who also drove the various models, it’s surprising to find that the Hybrid and N-Line variants are far more satisfying than the mainstream renditions, with the biggest surprise coming from the hybrid.

My colleague put it through its paces on the toughest canyon roads above Malibu, pushing it hard and driving it in a manner few eco-conscious drivers would. Having driven similarly challenging roads, not only did the Hybrid’s performance far surpass our expectations, it still managed to return fuel economy in the mid-40s. Not bad for those born with a lead foot. 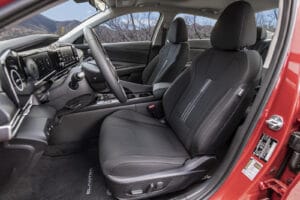 Hyundai might be No. 3 in the segment, but the interior suggests it won’t be there for long.

But it’s more than that. What makes the hybrid a revelation are two things: its independent rear suspension and the instant torque available from the hybrid’s electric motors and the dual-clutch transmission that transform the mainstream Elantra’s transmission, which ensures that it feels sluggish off the line until there’s some juice cooking under the hood. That’s when the driveline proves responsive, with quick steering, making the cut and thrust of rush-hour commuting easy to accomplish thanks to the suspension tuning.

And despite America’s crumbling infrastructure, little drama reaches the driver. The car’s control and stability are particularly impressive for an affordable compact; even more so if you consider how far Hyundai has come in vehicular dynamics over the decades. Whereas their vehicles once called for Dramamine before you set out, today’s vehicles retain their compliance, but not at the expense of handling. They are beautifully balanced.

Wrap Up: Currently, Hyundai might be number three in the compact car segment, but the Elantra is a potent threat, one that’s far better than most people realize. It’s a compelling choice in an everyday sedan.