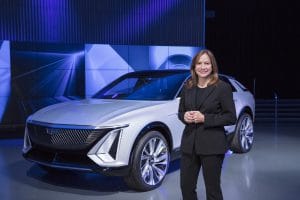 GM Chairman and CEO Mary Barra is hoping that investing $27 billion in EV and AV development will make it the global EV leader.

General Motors is putting serious financial and intellectual resources behind its electrification and efforts to reach the goal of being world leader in electric vehicles.

Chairman and CEO Mary Barra said the financial commitment – up to $27 billion ­– is designed to accelerate the company’s “all out pursuit of global EV leadership.” This means wresting the crown from the current leader and most valuable automaker: Tesla Inc.

Barra showed the company’s cards during a virtual appearance at an investor conference sponsored by Barclays. During her presentation, she highlighted the company’s product and sales plans for its electric vehicles.

(GM turns to its own Ultium drive system for future EVs.)

She noted that the company’s investment, which is up from $20 billion, is in EVs and autonomous vehicles through 2025. During that time, the company expects to launch 30 all-electric vehicles, which will account for 40% of the company’s entire line-up. More than 65% of those new launches will be available in North America. 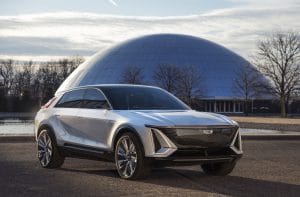 Barra’s taken on the challenge of leading the company to EV supremacy – despite the lead it’s spotted Tesla and potentially others – and vowed regularly to ensure GM would be at the forefront of battery-electric and autonomous vehicle development.

In fact, the company said that more than half of its capital spending and product development team will be dedicated to those programs.

“Climate change is real, and we want to be part of the solution by putting everyone in an electric vehicle,” said Barra. “We are transitioning to an all-electric portfolio from a position of strength and we’re focused on growth.

“We can accelerate our EV plans because we are rapidly building a competitive advantage in batteries, software, vehicle integration, manufacturing and customer experience.”

Part of those plans, she said, was to offer a wide price range of vehicles — one of the criticisms of EVs is the price. She said the company will have EVs ranging from below $30,000 to more than $100,000, which they’ve already shown: the GMC Hummer EV. 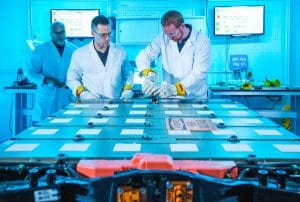 GM’s wireless battery management system is expected to drive the company’s Ultium-powered EVs to market faster, the Lyriq being the first example.

Zero-emissions vehicles are critical for a variety of reasons, such as federal mandates, but Barra points out that the company can grow its sales by as much as nearly 300,000 units annually, appealing to buyers in markets where the company’s sales have been week: the coasts. But overall her goal is pretty straightforward.

Her push to be the top player in the EV segment at some point in the future has spawned a push by the investment community to spin off the company’s electrification operations, unlocking its value to investors. The company’s stock price lags Tesla’s by more than by more than $420 per share, and some think it’s because the company’s not-so-exciting conventional auto business weighs it down.

She pushed that aside, saying, “We don’t think it has to be separated,” later noting that the internal combustion and electric vehicle businesses are complimentary as the vehicles share as much as 70% of the same componentry and those economies of scale are hard to ignore. 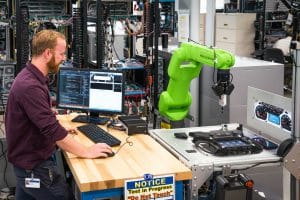 GM is looking to accelerate development of its autonomous and electric vehicles and advanced platforms like the Ultium battery system.

In the interim, she noted that GM is looking to exceed its goal of selling more than 1 million EVs annually between the U.S. and China by 2025. Barra added that the company’s pace of innovation is already providing returns as its new Ultium batteries, which will be used to power its first-ever all-electric Cadillac, the Lyriq, can now travel 450 miles on a single charge, up from the 400 miles the company reported at the reveal in March.

Because of the progress made within the Ultium program, the aforementioned Lyriq will launch in the first quarter of 2022, which is nine months earlier than previously announced.

“Ultium is already changing the way customers – and investors – view our company,” Barra said. “We are resolved as a management team to move even faster to expedite the transition to EVs. The all-electric future we are building integrates all the things we do better than anybody else — so we can put everyone in an EV, generate profitable growth and create shareholder value.”