Setting the standard for luxury and power. 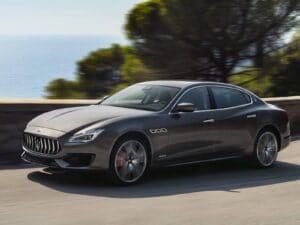 The 2020 Maserati Quattroporte S Q4 is an impressive mix of luxury and performance.

Chances are if you stood on a street corner almost anywhere in the industrial world and asked boulevardiers to describe a luxury car they would depict something remarkably close to the 2020 Maserati Quattroporte S Q4.

After all, the Quattroporte looks like a luxury sedan, with a nicely furnished interior, plenty of the latest technology and a powerful engine that gives it plenty of plenty of muscle on the open road.

Overview: You cannot spend a week with the 2020 Maserati Quattroporte S Q4 without being impressed with its combination of elegance, power and a subtle luxury that sets the car apart from all kinds of large and midsized four-door sedans in the luxury segment. The others simply cannot approach or match the sophistication or craftsmanship of the Quattroporte.

Exterior: The Quattroporte’s exterior design is sleek and nicely balanced, giving the car the classic lines that have come to represent a luxury car in the popular imagination. But the exterior silhouette also is distinctive, giving the 2020 Maserati Quattroporte a one-of-a-kind personality when it is sitting at the curb or moving through traffic. 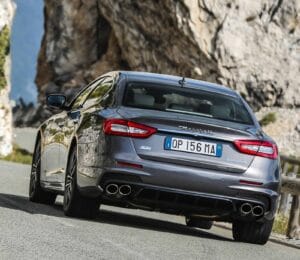 The 2020 Maserati Quattroporte S Q4 has a unique exterior look that gives it a distinct personality.

The car’s unique appearance is reinforced by the car’s broad rear quarter panels, which blend neatly with the trunk lid and position LED lights in the rear of the car. Out front the Maserati’s trident badge is used to good effect on the handsome front fascia. The car’s wheels and light fixtures add a touch of elegance to the overall exterior design.

Interior: The roomy cabin of the Quattroporte is inviting, luxurious and well furnished. But one of the most impressive elements of the vehicle is the way the small details, from the face of the small analog clock in the center of the dashboard to the trident inlaid to the shift leather to the discrete bright work, are used to good effect throughout the cabin.

The stitching in the leather dashboard is neatly done and the gauges and limited number of buttons are also well designed. The seat is supportive, and the interior lighting scheme is welcoming and unobtrusive during a night drive.

One of the most impressive elements of the Quattroporte were the back seats, offering passengers extra comfort and amenities. Visibility from the driver’s seat was excellent and the steering wheel, which includes controls for the radio and cruising, also had friendly feel.

Powertrain: In discussing the powertrain in the 2020 Quattroporte S Q4, the first thing of note is that the 3.0-liter V6 engine is designed jointly by Maserati and Ferrari and is assembled in Maranello, Italy. The twin-turbo V6 produces 424 horsepower. 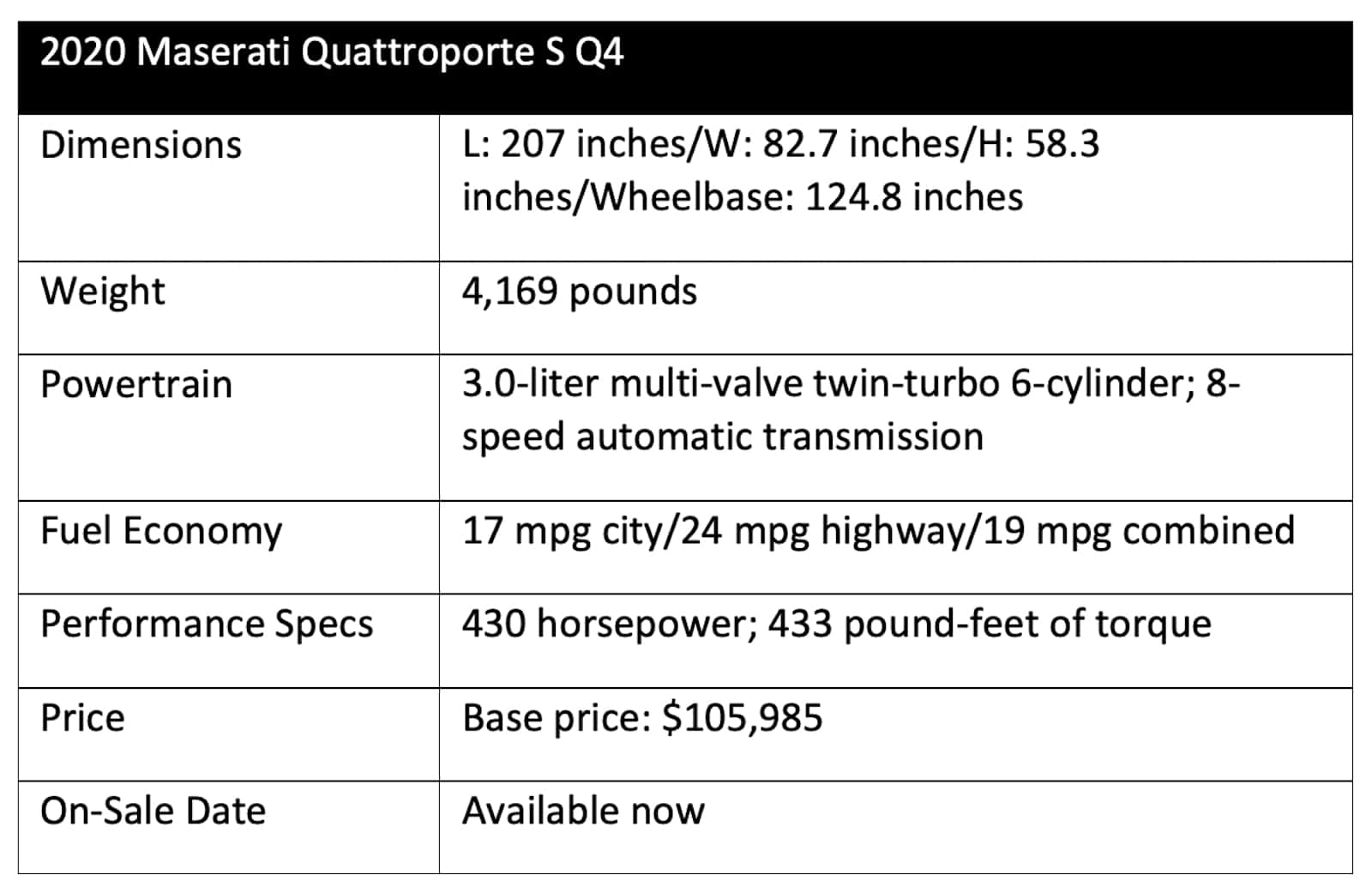 It’s matched to a ZF 8-speed transmission and it can go from zero to 60 in under five seconds and with a top speed of 175 miles per hour, it can move up past the nominal speed limits found around the United State very quickly. Fuel economy is about average for this type of rear-wheel-drive sedan at 17 miles per gallon in city driving and 24 miles per gallon of the highway. An all-wheel-drive system is available on the Quattroporte S Q4.

Technology and Safety: The Quattroporte S Q4 I drove was equipped with multiple airbags as well as driver assistance features such as forward-collision warning, blind-spot detections, lane-departure warning, rear-cross traffic alert and rear-facing and surround-view cameras as well adaptive LED headlamps and a 10.4-inch screen for navigation and entertainment, which could be piped through a Bower & Wilkins sound system.

The technology was cleanly integrated into the cockpit, thus it was readily available to the driver. In addition, the car is equipped with several features such as a flat floor and active grille shutters that help improve the Quattroporte’s aerodynamic quality and boost the car’s aero rating to a slippery .28. 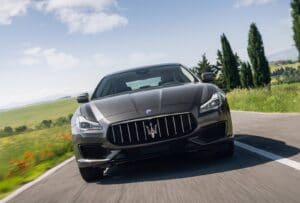 Italian style has impressed generations of connoisseurs with innovation and elegance so it should not be a surprise that it is carried over into the Quattroporte.

Driving Impressions: The 2020 Maserati Quattroporte was fun drive not only because it attracted the attention of other drivers but also because its performance was well honed. The engine delivered more than enough power critical times and the refined, but quite audible exhaust note also added to the pleasure of pressing down on the accelerator.

I wondered whether the suspension on the Quattroporte would measure up the deftly tuned suspensions on comparable German sedans — it did. The ride was smooth on a variety of surfaces, including a stretch of dirt road onto which I was forced during a short detour. The steering also was quite responsive, and the brake had more than enough stopping power.

Wrap Up: Italian style has impressed generations of connoisseurs with innovation and elegance so it should not be a surprise that it is carried over into an automobile that has long been part of the country’s industrial heritage.

Yes, its pricey with the manufactures suggested retail price for a Quattroporte running anywhere from $102,190 to $126,990 and at that price point buyers with the money to spend on a new vehicle have a lot of notable choices. But the 2020 Maserati Quattroporte comes with an impressive pedigree and with its sophistication and elegance is bound to make an impression wherever its driven. Sure, it is a bit flashy but it also very appealing in both form and function. 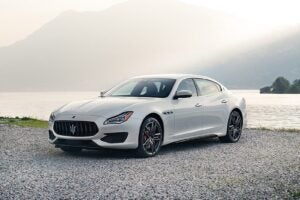 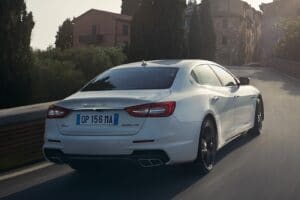 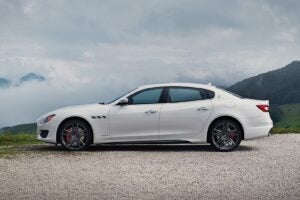