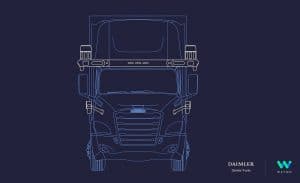 Waymo is looking to get into way more autonomous vehicles by partnering with Daimler AG to develop self-driving semi trucks, starting with the Freightliner Cascadia.

The two companies announced the new development partnership Tuesday. The Class 8 Freightliner, which is owned by Daimler, will use Waymo’s autonomous driving technology named The World’s Most Experienced Driver.

By joining forces, it should help accelerate the development process, which Waymo has been working on since 2017 when it began testing its technology in Class 8 trucks in California, Georgia, Arizona, New Mexico and Texas.

Daimler AG’s North American subsidiary controls 70% of the heavy truck segment, but it’s getting competition from Volvo and even Tesla, which said it will begin production of its semi truck some time next year. Having a roadworthy truck with self-driving capabilities is designed to help the company keep a stranglehold on the North American market.

The German company said it will continue working on its own system in a $600 million-plus program it announced not long ago. “Having a dual approach, working with Waymo and another company gives our customers a choice,” said Roger Nielsen, head of Daimler Trucks North America.

Waymo’s program has been in development for nearly three years now and its service is called Waymo Via. That’s different than Waymo One, the autonomous robotaxi service the company is currently testing with the public near Phoenix.

The company had been testing its Driver program for several years, logging more than 20 million miles during that time. Now by partnering with Daimler, it can expand the number of on-road scenarios the technology experiences to make the system more robust. It also ensures they can be easily incorporated into the vehicle’s design.

“When designing a new platform, we work closely with our OEM partners to ensure we can integrate our Waymo Driver seamlessly into their vehicles and manufacture them easily,” the company said in a blog post earlier this month.

“We begin this process by using our most recent self-driving system, comprised of radar, lidar, cameras, and compute and adapt it to the new vehicle, optimizing it for the various platform requirements, such as the variation in potential blind spots.”

Conversely, Daimler’s truck unit is looking to get a competitive advantage as quickly as possible. “The combination of increased road freight volumes and the need and vision of fleet operators for highly automated trucks, is what fuels our relentless pursuit of innovation,” Nielsen said in a statement.

“We are pushing engineering solutions that strive above all to increase safety and help our customers improve business efficiencies. Based on our collaboration with Waymo, we will be in the unique position to be able to provide our fleet customers with a choice among the best solutions for their individual requirements.”