Drive-by-wire-based set up makes it simple to move steering wheel. 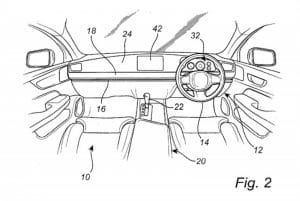 Volvo’s recently earned a patent for a steering wheel system that can move the width of the vehicle.

With the age of the autonomous vehicle approaching, automakers working on the problem are left with a bit of a dilemma: what to do with the steering wheel? Volvo’s got what it thinks could be the answer.

Volvo recently won a patent for a steering wheel system that can shift from one side of the car to the other, or simply sit in the center. The drive-by-wire-based system essentially sits on a rail that can move the width of the vehicle.

Because its drive-by-wire, the entire steering system – wheel, instrument cluster and other accessories – is essentially one electronic unit. This allows it to sit on either side of the vehicle while being able to continue working. 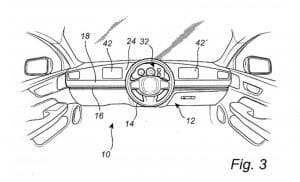 The new system would allow a driver to move the steering wheel out of the way while in full autonomous mode.

In the short term, it makes building a vehicle for any country much simpler potentially. No longer do you have to re-engineer a vehicle just for Great Britain, Australia and Japan. However, the longer term view is that this system makes autonomous driving more convenient.

Want to drive? No problem, simply grab the wheel. Tired of driving? No problem, switch to self-driving mode and move the steering wheel to the center of the vehicle to give yourself more room to relax, read or use your laptop.

All of this may sound a little far-fetched, but the first hurdle was cleared several years ago with the drive-by-wire system. Automakers have been using the technology in several vehicles. There are some complaints about how the steering feels, but any driver willing to use an autonomous system is less concerned about “steering feel” anyway.

(Ford patent shows how an autonomous car’s steering wheel, pedals could fold away.)

A moveable steering wheel isn’t all that unique. Ford offered its “swing away” wheel in the 1960s. It could be swung to the right, allowing for easier egress from the car. A few years back, Blue Oval engineers received a patent for a steering wheel – and pedals – that could simply fold up into the dashboard at the push of a button when the driver wanted to shift to autonomous mode. 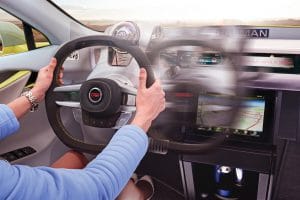 The company had planned to have the system in place for 2021 models based on the expectation that Level 3 self-driving would be available on vehicles by then — no such luck. Ford’s system is actually designed for Level 4 and 5 autonomy. However, Volvo and Ford aren’t the only ones that have tinkered with this concept.

Rinspeed teamed with Michigan-based supplier TRW almost a decade ago to show off a system similar to Volvo’s in the Rinspeed XchangE Concept. The XchangE concept, shown at the 2014 Geneva Motor Show, allowed the driver to “park” the steering wheel in the center, allowing the autonomous system to take over while the driver could lean back and relax in “business class-style seats,” according to the company. Drive-by-wire made the whole thing possible.

Volvo’s system doesn’t have such a convenient system for the pedals on the floor, suggesting pressure-sensitive pads, hydraulically- or pneumatically actuated sensors, or another technology might be used to handle that function. Those “pedals” would be installed on both sides of the vehicle and activate when the steering wheel was moved.