Return of the Rotary: Mazda Will Use Wankel as Range Extender for All-Electric MX-30 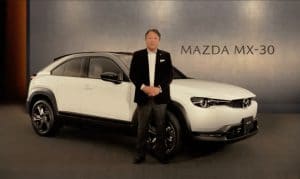 Mazda CEO Akira Marumoto revealed that the company plans to use the Wankel rotary engine again.

Mazda has formally confirmed a report that first appeared on TheDetroitBureau.com in March 2017: the rotary engine set to make its return in 2022.

Otherwise known as a Wankel engine, it was a beloved part of the Mazda engine family for decades but was phased out with the demise of the RX-8 sports car in 2012. But unlike past applications, the rotary the Japanese automaker is now developing won’t be used to directly power a vehicle. Instead, it will serve as a range-extender for the all-electric Mazda MX-30.

Mazda has been slow to embrace electric powertrain technology, preferring to focus on its efficient SkyActiv gas and diesel engines. But increasingly stringent global mandates – notably, with many countries planning to ban internal combustion engines entirely – means it has to move quickly to bring out hybrids and all-electric models, something CEO Akiro Marumoto described as a “green move” in a video confirming plans for the rotary redux.

(Return of the Rotary redux? Mazda hints that MX-30 could get a Wankel range extender.) 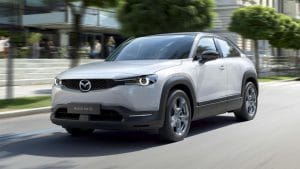 The new rotary engine will be used as a range extender for the MX-30 EV in 2022.

There was a time when many auto industry leaders saw the rotary engine as the way of the future. A number of manufacturers began tooling up to produce Wankels due to their simplicity, compact size and high power output. But the buzz didn’t last long. General Motors, among others, backed away as it became apparent the design wasn’t up to early expectations.

Mazda remained the only manufacturer committed to the technology, even after a series of problems led to massive failures requiring substantial payouts that threatened the company’s very survival. Mazda engineers eventually overcome reliability issues, but by the turn of the millennium the Wankel had become little more than an afterthought. It was last used for the RX-8 sports car which ran from 2003 to 2012.

Since then, Mazda has repeatedly hinted that it would bring back a new version of the rotary engine that could address its biggest problem: relatively meager fuel economy. The automaker isn’t revealing specific details about the new rotary, but it appears it has found a way to overcome that limitation by changing the way the Wankel is used. It turns out that the engine is most efficient when operating at a fairly consistent rate, rather than dealing with the constant revving up and down required when powering a conventional automobile.

(Mazda unveils MX-30 — and delivers a surprise, a hybrid comes before the EV.)

That’s perfect in a range extender application, where the goal is to provide extra energy for an electric vehicle that either can be used to boost performance or take over when the batteries are discharged. It’s a concept similar to what we saw with the Chevrolet Volt plug-in hybrid, as well as the BMW i3 REx – though both of those used conventional gas engines as range extenders. 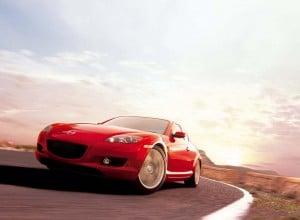 The key point is that range-extending engines never actually drive the vehicle’s wheels, so they can run at a steady rate that maximizes their efficiency.

The MX-30 itself is Mazda’s first battery-electric vehicle and began arriving at showrooms in Europe recently, with a mild hybrid version now on sale in Japan, as well. Company insiders hint a version of the little BEV could arrive in the U.S. late next year.

The crossover, which shares the same underlying platform as the Mazda 3 and CX-30, has limited space available for batteries so, like the BW i3, range is relatively limited. An extender will address that problem and the rotary engine has the advantage of taking up relatively little space.

We’re hoping Mazda will soon provide more technical details about the package and, perhaps, let us know if the MX-30 with a rotary range extender will also make it to the States.