GM Unwraps the GMC Hummer, Boasts “No Equals” – Especially When it Comes to the Price Tag 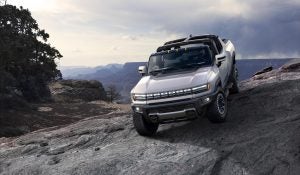 The 2022 GMC Hummer EV will put a premium on off-roadability with its Edition 1 launch model.

For those who think of an electric vehicle as something quirky and limited in capabilities, the new GMC Hummer is likely to come as quite a shock.

One of at least 20 battery-electric vehicles General Motors plans to bring to market over the next three years, the Hummer will offer the sort of power and capabilities that could challenge conventional pickups like GMC’s familiar Sierra model. It also will offer unique features, such as its ability to “crabwalk,” or move diagonally. But one of the most notable details is the fact that, at $113,000, the launch version of the Hummer will be the most expensive factory-built pickup ever.

“This innovative truck comes to market with speed and purpose, bringing GM another step closer to an all-electric future,” said Mark Reuss, president of General Motors. “With our Ultium Drive architecture as the foundation for an exceptionally broad range of performance, Hummer EV is perfect for the customer who wants capability, efficiency and performance.”

First teased during a closely watched Super Bowl commercial last winter, GM gave the world a first clear look at the new Hummer during a five-minute online preview Tuesday night, though it held back on a number of details that may be revealed as part of a Wednesday news media backgrounder.

The first all-electric model to bear the GMC badge, the Hummer actually will be offered in two distinct body styles, though a pickup version will come to market first next year. The automaker hasn’t indicated how soon afterwards an SUV version will follow.

The Hummer name picks harkens back to a brand that General Motors was forced to abandon following its emergence from bankruptcy a decade ago. But, where the original, gas-guzzling Hummer models were vehicles that environmentalists loved to hate, GM is betting the new, all-electric models will win over both green-minded motorists as well as those who might have previously ignored battery-powered vehicles. 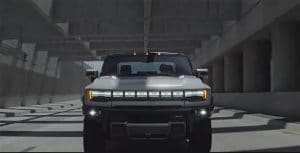 GM hasn’t released all the essential details but claims the 2022 GMC Hummer Edition 1 will get over 350 miles range.

Eventually, both Hummer pickup and SUV will be offered in a variety of trim levels, but the first truck, dubbed Edition 1, is meant to make clear that EVs don’t have to be cramped, slow and stodgy.

Its three motors – one up front, two spinning the rear axle – will produce a peak 1,000 horsepower and 11,500 pound-feet of torque. The automaker did not reveal payload or tow capacity but did announce that the Hummer Edition 1 will be able to launch from 0 to 60 “in approximately 3 seconds,” or roughly on par with the 2021 Chevrolet Corvette Stingray.

Another detail yet to be revealed is the size of the Hummer battery pack – though, last March, GM officials indicated it could run as large as 200 kilowatt-hours. Whatever the size, the company said Tuesday night that Hummer will be able to plug into the latest public fast chargers and, when using ones delivering 350 kilowatts and 800 volts, will be able to add another 100 miles of range in just 10 minutes. Total range on a full pack will be “350-plus miles.”

(GM turns to its own Ultium Drive System for future EVs.)

Removable sky panels will give passengers an expansive view of the Great Outdoors.

The pack will use the all-new Ultium batteries GM is developing in partnership with South Korea’s LG Chem. They will be produced at a new plant near Lordstown, Ohio. The automaker has not yet said where the Hummer will be assembled, but it is widely expected to come off an assembly line on the Detroit border that GM last week renamed Plant Zero.

“We had one goal for Hummer EV: Build the most capable factory truck – ever,” said Al Oppenheiser, GMC Hummer EV chief engineer, in a news release. “It’s an absolute off-road beast with a unique e4WD drive system that provides maneuverability unlike anything GM has ever offered before.” 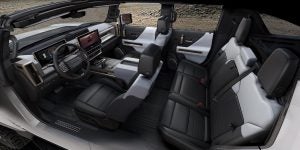 That includes the ability to “crabwalk” by making use of the way each motor can turn independently.

The Hummer Edition 1 will come shod with 35-inch wheels and tires and, according to the webcast, is “37-inch capable.” It also will offer up to 18 separate cameras to make it easier to maneuver on and off-road, including cameras showing a view, front and rear, from the underbody. Skid plates – or what GM called “rock sliders” – will help protect the drivetrain and, in particular, the battery pack, when clambering over rough terrain. And the Hummer’s “Extract Mode” will raise the vehicle’s ground clearance by 6 inches to extend its off-road reach.

The roof of the Hummer, meanwhile, will feature removable “Sky Panels” that will all but turn it into a convertible.

An SUV version of the GMC Hummer will be added later.

For on-road use, Hummer will become the first vehicle to be offered with Super Cruise, the hands-free driving system that, until now, was offered solely through the Cadillac brand. The second-generation system will be able to work on about 200,000 miles of limited-access highways in the U.S. and will add the ability to execute hands-free passing maneuvers simply by tapping the turn signal stalk.

GM is hoping that Hummer will help enhance the image of EVs, in general, and the company’s own electrification effort, in particular. CEO and Chairman Mary Barra is fond of saying the company is “on a path to an all-electric future,” and the automaker has already detailed plans to roll out an assortment of new entries by early 2022. These include a stretched version of GM’s first long-range model, to be called the Chevrolet Bolt EUV, as well as Cadillac’s first BEV, the Lyriq SUV.

The company hopes to pose a more direct threat to Tesla, the only manufacturer currently showing real sales momentum in the battery-electric market. But the segment is about to get crowded, with new entries coming from both established carmakers, such as Ford and Volkswagen, as well as from new entrants like Lucid and Rivian. The Hummer, in particular, is set to face serious competition, as well, with as many as nine all-electric pickups due to market by mid-decade.

But there are signs that it could pull things off. Despite the $113,000 price tag, the 2022 GMC Hummer Edition 1 reportedly was sold out within less than an hour after Tuesday night’s unveiling.