Yet another crossover is expected to follow, this one fully-electric. 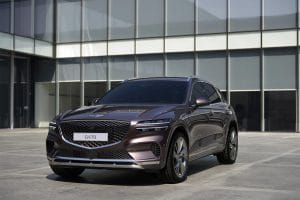 It’s barely gotten its first SUV into showrooms but Genesis is already showing off its second, the Korean luxury brand offering up a first look at the GV70 set to come to market next year.

Along with the bigger Genesis GV80, the news is likely to be critical for the upstart marque which has been struggling to gain traction with a line-up that, until now, consisted of just three sedans in an SUV-crazed market.

“The audaciously designed new GV70 breaks new ground for Genesis through purity of design execution,” proclaimed the brand’s design chief SangYup Lee, in a statement accompanying these images. “This follows the Genesis G80 and GV80 which demonstrated the perfect balance of our design identity ‘Athletic Elegance.’” 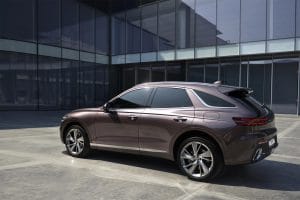 That distinctive rear quarter-glass is likely to become the most controversial feature on the GV70.

There is certainly a familial resemblance between the GV70 and the two most recent Genesis offerings, the GV80 and the G80 sedan. That starts with a positively huge take on the brand’s five-sided “crest shield” grille, as well as the quad front headlight design echoed at the rear.

The grille looks more well integrated into the new SUV’s face and adds a little more depth to it, with the brightwork frame picked up elsewhere on the new GV70, including the chrome surrounding the side windows. Twin creases, including what Genesis dubs a “Parabolic Line” counter the coupe-like roofline. Meanwhile, the new ute adds a distinctive, triangular third piece of glass on either side of the cargo compartment. It’s likely to become the most crossover’s most controversial feature. 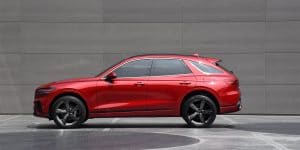 In its release, Genesis said it will offer two individual versions of the GV70, the dark model here dubbed the Luxury edition, the red on the GV70 Sport.  The latter will get larger air intakes bigger exhaust pipes, black-out trim, unique wheels and other distinctive details. Inside, Genesis noted, the Sport will get its own sport steering wheel and “carbon-fiber appointed consoles and doors.”

The interior of the Genesis GV70 also appears to pick up on some key elements from the GV80, such as the knurled control knob operating infotainment functions, the instrument panel divided up into two separate zone – emphasized by a two-tone color scheme. Both versions of the SUV will feature a widescreen display that can present a variety of apps simultaneously, such as a navi map and audio information. A broad oval section of the IP, done up in what appears to be piano black, is reserved for what appears to be climate and other hard controls, as well as a smaller LCD display.

Genesis is leaving us to guess about mechanical details, including the possible powertrain options. There are the two now used in the bigger GV80, a 2.5-liter turbo-four making 300 horsepower and 311 pound-feet of torque, and a 3.5-liter turbo-six bumping that up to 375 hp and 391 hp. The G70 sedan, meanwhile, could contribute its 2.0-liter turbo-four, or its twin-turbo 3.3-liter V-6. And there are other possibilities it could draw from sitting on parent Hyundai’s powertrain shelf. 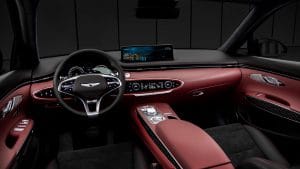 The interior of the Genesis GV70 Sport shows off the two-zone IP layout.

It’s all but certain that both rear-wheel-drive and all-wheel-drive variants are in the Genesis marketing plan for the GV70.

In an unusual twist, the automaker noted that, “For about two months, beginning on October 29, Genesis will hold test drives of approximately 100 uncamouflaged GV70 SUVs that will be carried out across Korea for final testing before the official launch.”

The company will also offer “special benefits” to winners of a “MyGenesis” event who snap pictures of the test vehicles and then post them to social media.

The GV70 won’t be the last SUV coming to the Genesis line-up, incidentally. Several insiders have told TheDetroitBureau.com that the brand’s first all-electric model, set to be revealed in 2021, also will opt for an SUV design. Genesis, like both Hyundai and Kia, plans to roll out an array of all-electric models during the coming decade.

(Genesis set to double line-up in next 12 months.)