Fisker and Magna Lock Down Manufacturing and Investment Deal

Supplier will provide platform for new Ocean EV, assemble it in Austria.

By teaming up with mega-supplier Magna International, Fisker Inc. appears to have locked in place plans to bring its Ocean battery-electric vehicle into production by 2022.

Magna also will provide the underlying platform for the all-electric SUV, company founder Henrik Fisker said, and for other products to follow. Earlier this year, the eponymous startup announced a goal of launching four products by mid-decade, and a total of seven by later in the decade, ranging from a sleek sports sedan to a large pickup truck.

“This is huge news for us (and) pretty exciting,” the Danish-born Fisker told TheDetroitBureau.com during a telephone interview on Thursday.

(Exclusive: Fisker inks MOU with Magna, deal will put it in production by late 2022.)

As part of the deal, Canada-based Magna will take a 6% stake in Fisker. The announcement comes barely two weeks before the new EV maker completes a reverse merger with a so-called blank check company, or SPAC, that will see it listed on the New York Stock Exchange under the symbol “FSR.” That move will value Fisker at more than $3 billion and give it access to around $1.1 billion in capital.

By teaming up with Magna, however, Fisker should be able to better spread out its assets as it won’t have to come up with the money needed to set up a factory to start building the Ocean SUV – a project that Henrik Fisker said should save as much as $1 billion. Fisker also will have a ready-made, skateboard-style platform it can use to underpin the Ocean and some of the products scheduled to follow, amounting to more big savings.

“I believe most EV startups likely won’t survive because it’s hard to set up your own factory,” said Fisker, a one-time designer for Aston Martin. “We’ve de-risked our own program”

Word that Fisker was talking with Magna leaked out during the summer. Before that, it seemed likely that the California-based EV wannabe would be working closely with Volkswagen AG. In fact, a prototype of the Fisker Ocean unveiled last January at the Consumer Electronics Show in Las Vegas was based on the same MEB “architecture” that VW is using for its new ID.3 and ID.4 battery-cars.

The platform Magna has developed is slightly larger and will allow Fisker to make Ocean slightly larger. “So, it allows us to put in a third row and achieve class-leading range” with a larger battery pack than originally planned, said Fisker.

The prototype featured an 80 kilowatt-hour lithium-ion pack. Fisker won’t say how much larger the new platform’s pack will be but stressed that it will allow the production version of the Ocean to top the longest-range version of the Tesla Model Y which currently manages 315 miles between charges, according to the EPA.

(Fisker confirms four models in the works by 2025 — including all-electric pickup truck.)

At least initially, the Ocean will be assembled in Graz, Austria at the Magna-Steyr plant that has handled contract assembly work for a range of different manufacturers as diverse as Toyota and Mercedes-Benz. The goal is to begin production in 2022, with a target of assembling 50,000 of the electric SUVs the following year.

Longer term, Fisker has begun talking with Magna about setting up a U.S. production facility, the CEO said, adding that another EV manufacturer “may be involved.”

If anything, Fisker said he welcomes the idea of sharing the Magna EV platform and a future plant with another automaker as it would increase utilization and improve economies of scale.

“We are very happy to be able to work with Fisker on such an exciting sustainable product and to see what additional opportunities this cooperation may bring,” said Magna International President Swamy Kotagiri. “This is a great example of our strategy to leverage our strong portfolio to scale for future mobility needs and utilize our full vehicle engineering and manufacturing capabilities.”

While the deal with Magna scuttles plans to use the Volkswagen MEB platform for the Fisker Ocean, they have not completely parted ways. 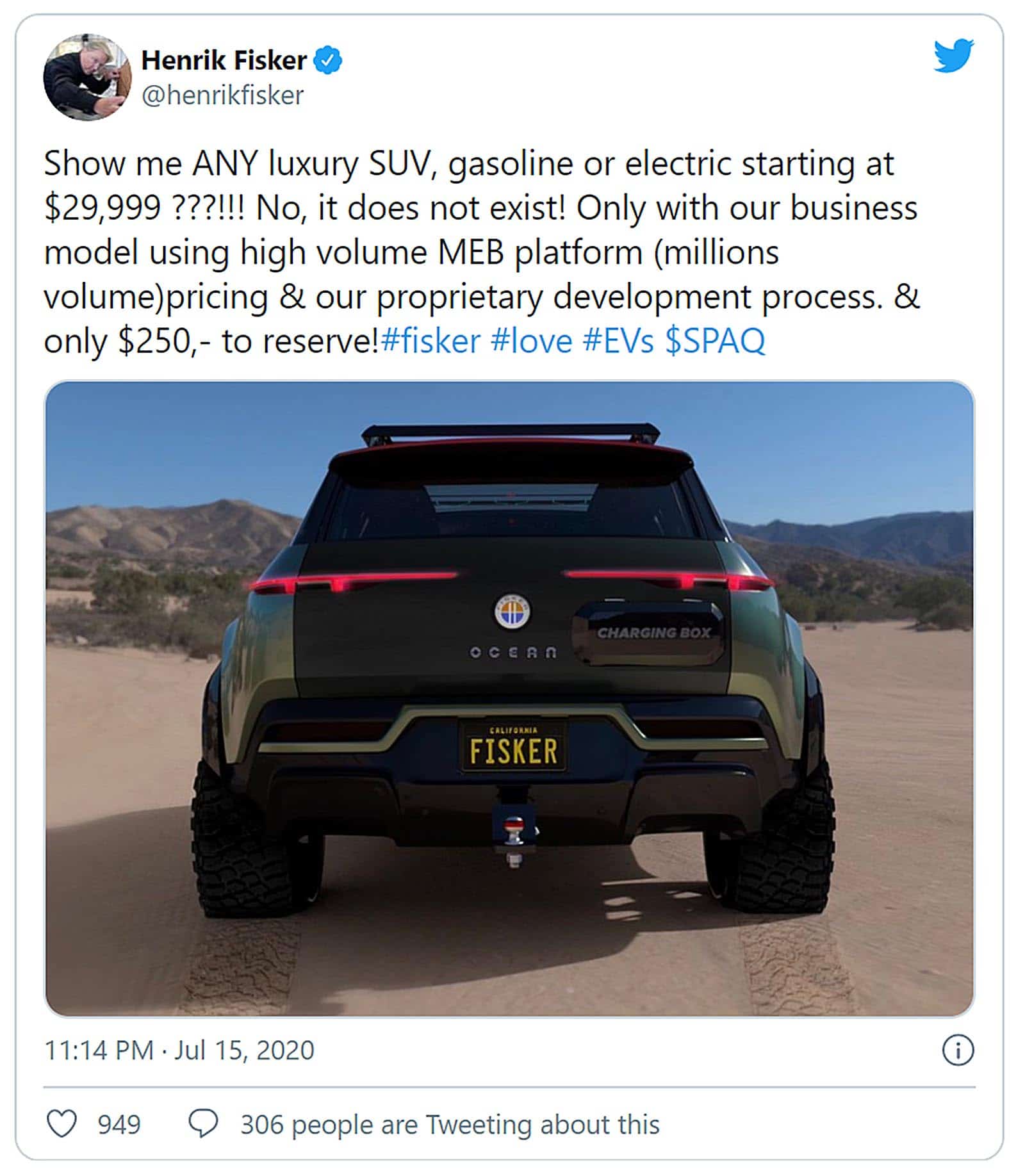 “Fisker and VW are in continuous discussions to grant Fisker access to specific parts and/or components mainly focusing on body and interior parts, subject to an agreement between the parties,” Fisker said in a statement on Thursday.

“Details of the specific parts being supplied will remain confidential, respecting the status of discussions, product planning and intellectual property rights of both companies.”

Deals like the one between Fisker and Magna are becoming more norm than exception these days, noted the Fisker CEO, reflecting what he described as a “free-for-all” reshaping the auto industry.

Nikola is finishing up negotiations with General Motors that would see the industry giant both assemble the start-ups new Badger pickup and provide both fuel-cells and batteries for a host of Nikola products. Rivian, meanwhile, is partnering not only with Ford but Amazon, the online giant ordering 100,000 electric vans for its Prime delivery operations.