Filling a Gap in an expanding line-up of SUVs. 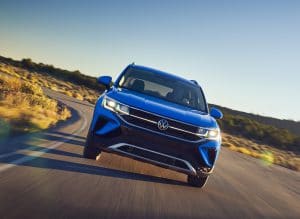 When it comes to adding sport-utility vehicles, VW’s plans seem to be “keep ’em coming” with the debut of the new Taos.

“You can’t be too rich or too thin,” goes the old saw, but for an automaker the line might read, “You can never have too many SUVs.”

With crossovers and conventional sport-utility vehicles now accounting for more than half of all U.S. new vehicle sales, Volkswagen is taking this idea to heart. It’s added an assortment of new models and variants during the last several years – and now, it’s getting ready to launch yet another, the 2022 VW Taos.

“In a very short space of time we have become an SUV brand,” said Duncan Movassaghi, the executive vice president of sales for Volkswagen of America, during a media background briefing on the new CUV.

Right now, the Atlas family makes up fully a third of the carmaker’s U.S. sales, the smaller Tiguan a roughly equal share. With the addition of the Taos, it seems, a brand once known for products like the Beetle, Golf and Jetta will sell sedans and hatchbacks almost as an afterthought. 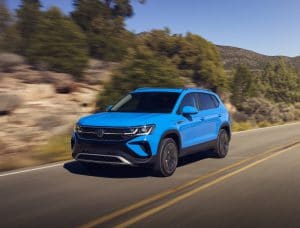 The Taos will slot in under the Tiguan. Both crossovers will share the modular MQB platform.

The Taos will slot in under the Tiguan. Both crossovers will share the same modular MQB platform used for the vast majority of new VW-branded vehicles (with the exception of all-electric products like the ID.3 and ID.4 which use the skateboard-like MEB architecture).

The 2022 Taos measures 72.5 inches wide, 64.4 inches tall and 175.8 inches, nose-to-tail, about 9.3 inches shorter than the Tiguan. The interior package won’t seem that much smaller, however, thanks to careful engineering and a wheelbase that, at 105.9 inches, is only 3.9 inches smaller than Tiguan’s.

Offered only in a 2-row, 5-seat configuration, Taos will offer 99.9 cubic feet of passenger volume, only 1.6 cf less than the current base VW crossver. Cargo space is 28.1 cf behind the second row, jumping to 66.3 cf with that back row folded down.

While the automaker considered the idea of a hybrid driveline, Taos will be offered, for now, with just a single powertrain package – albeit one using the “super-efficient” Miller Cycle, noted Jose Bravo, the CUV’s product manager. Precise mileage numbers haven’t been released yet but the 1.5-liter turbo-4 makes 158 horsepower and 184 pound-feet of torque, quite competitive numbers in its segment and more than what the current Jetta makes.

Buyers will have the option of a 4Matic all-wheel-drive package, the turbo engine mated to a seven-speed dual-clutch gearbox. The front-drive model will pair that engine with an eight-speed automatic.

(VW Atlas is king of the world … of best family cars.) 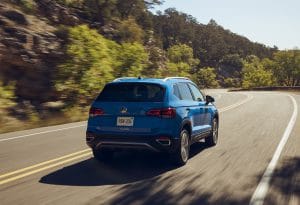 Both versions of the 2022 Taos will feature a strut-type front suspension. The AWD model will get a multi-link rear, the FWD a torsion beam rear-suspension.

Visually, the 2022 Volkswagen Taos will pick up on the brand’s current design language – but it’s not a Tiguan that got shrunk in the wash. The flared headlamps, grille and sculpted hood actually have more in common with the two-row Atlas Sport, while there’s an illuminated light bar stretching across the grille that could have been lifted directly off the new VW ID.4 battery-electric SUV.

The base Taos features 17-inch wheels and tires, but 18- and 19-inch upgrades are available.

The interior is surprisingly roomy, at least based on the numbers. (We’ll have to wait for an in-person ride to confirm how it actually feels.) The horizontal layout of the instrument panel is meant to enhance the apparent width of the cabin. Two-tone seats are standard on all models and the base cloth fabric can be upgraded to a combo leather and leatherette. A heated, 8-way driver’s seat is also available. 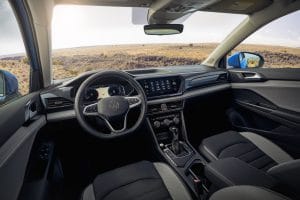 With Taos, VW is moving completely away from conventional, analog gauges, all models getting the reconfigurable Volkswagen Digital Cockpit.

With Taos, VW is moving completely away from conventional, analog gauges, all models getting the reconfigurable Volkswagen Digital Cockpit. The automaker’s Car-Net telematics system and onboard WiFi are built into all models. And the MIB3 infotainment system and wireless charging, paired with an 8-inch touchscreen, is standard on mid- and upper-trim models. Base models get a 6.3-inch display. High-line versions also get 10-color ambient lighting and an 8-speaker version of the BeatsAudio system.

The 2022 Volkswagen Taos will reach U.S. showrooms next summer and will target competitors like the Jeep Renegade, Mazda CX-30, the newly updated Nissan Rogue and the Honda HR-V. While pricing won’t be released until next year, VW officials strongly hint they intend to be fully competitive with those established players.