An update true to an iconic machine. 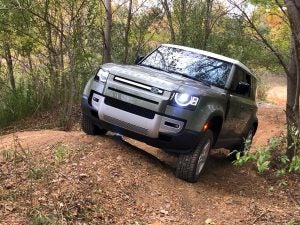 After a more than 20-year absence, the Land Rover Defender is back.

The phrase, “automotive icon,” is frequently overused, but there are a few models to which it naturally and accurately applies, products like the Volkswagen Beetle and the Ford Mustang – and the Land Rover Defender.

That rugged SUV has been missing in action for quite some time, gone from the U.S. for more than two decades, and entirely out of production since shortly after the end of the Great Recession. So, no surprise, there’s been plenty of interest in what parent Jaguar Land Rover might come up with when they announced plans to revive the Defender nameplate as the anchor for the missing third leg in the LR stool.

Overview: Redesigning an icon is never easy, especially when its roots trace back to the brand’s beginning. The Defender is the direct descendant of the 1948 Land Rover Series I. Design chief Gerry McGovern and his team kicked off a bit of controversy when the 2020 Land Rover Defender was revealed last year. To some, it was too modern, to others, too retro. For most, including this reviewer, it strikes just the right visual balance, however, one that balances crisp lines with just the right level of aero-friendly curves. 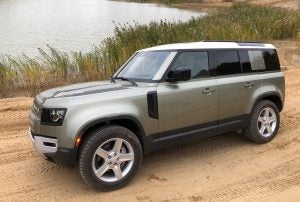 The new Defender is more traditional than many of the car-based crossovers.

Of course, as with any model bearing the Defender badge, the real question was how well it would perform. After spending an extended weekend behind the wheel we discovered it more than lives up to the toughest expectations. It was effectively unstoppable as we put it through its paces at the new Holly Oaks Off-Road Park an hour north of Detroit, flying through sand and mud and deftly maneuvering over boulders and other obstacles. Equally impressive were the new SUV’s on-road manners, a distinct shortfall with Defenders past.

Exterior: The new model is, without question, more traditional than many of the car-based crossovers now on the market, but there are more curves than on the boxy old Defender, which was defined by its angles and creases, and that has created at least some noise among Land Rover fans.

“… If anything, the 2020 Defender appears broader and more solidly planted than the last generation, with broad shoulders giving it a confidence-inspiring sense of muscularity …”

The nose, with its distinctive lighting, and the hood, with hidden cut lines, add a sense of modernity even while the overall look is timeless, as you would expect of an icon. 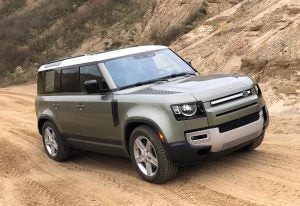 The nose, with its distinctive lighting, and the hood, with hidden cut lines, add a sense of modernity.

One has to look beyond the sheet metal, however, to see the new Defender’s real beauty. Technically, it borrows its underlying platform, known as the D7, from Land Rover’s highline Range Rover series. But it has gone through extensive revisions to deliver the go-absolutely-anywhere capabilities one would here expect. Curiously, the smooth and well protected underbody actually has a second advantage, improving overall vehicle aerodynamics.

There will be two versions of the Defender, the three-row 110 with its 119.0-inch wheelbase, and the two-row 90, with a 101.9-inch wheelbase. With their short overhangs, both will have the ability to crawl up steep rock climbs. And the normal 8.5-inch ground clearance can be raised to a rut-clearing 11.5 inches with a touch of a button on Defenders equipped with the optional air suspension. The ute also can ford water as deep as 35.4 inches.

Interior: Here, yet again, Land Rover designers found a careful balance between luxury and practicality. No, unlike versions of the new Ford Bronco, you won’t be able to hose it out, but you can outfit the new Defender with a variety of materials, from luxurious leather to more practical fabrics and synthetics easily cleaned after a day on the trail.

The exposed rivets running across the door, as well as the functional and visible magnesium crossbeam running across the instrument panel, add to the sense of ruggedness. But there’s also a more modern element to the interior, starting with the wide touchscreen display atop the center stack. There’s plenty of space to display a navigation map when you’re running down the highway, along with information about the music you’re listening to. 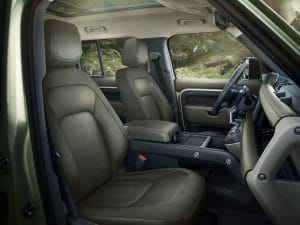 The new Defender can be outfitted with a variety of materials, from luxurious leather to more practical fabrics and synthetics easily cleaned after a day on the trail.

Off-road, it becomes even more functional, displaying images from Defender’s various cameras, as well as a simulation of the truck’s mechanicals. A quick glance reveals precisely the angle of each axle and, among other things, whether the optional front and rear differentials have been locked.

The gear-shift lever has now been relocated onto a shelf sticking out from the center stack on which, depending upon trim and options, you’ll find other controls, including one to raise or lower the air suspension, as well as the Terrain Response Control that can be used to instantly adjust multiple vehicle settings to optimize them for trail conditions as varied as mud and ruts and rock climbing.

The Defender 110 can be ordered with an optional front center jumpseat, offering seating for up to eight. Meanwhile, there are plenty of storage niches, as well as places to plug in your USB-connected devices.

Powertrain: As with the rest of its line-up, Land Rover offers an assortment of powertrains, dependent upon the market. For the U.S., two options are available, the base 2.0-liter turbo-4 shared with Jaguar making 296 horsepower and 295 pound-feet of torque. It’s reasonably peppy and more than enough, both on and off-road. 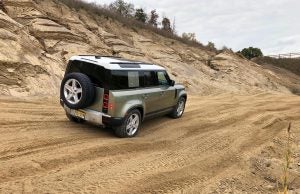 The 110 SE is powered by a 3.0-liter inline-6 that combines both turbocharging and supercharging, as well as a fuel-saving 48-volt mild hybrid drive.

The upgrade is a 3.0-liter inline-6 that combines both turbocharging and supercharging, as well as a fuel-saving 48-volt mild hybrid drive. It takes the numbers up to a more spritely 395 hp and 406 lb-ft of torque, the latter number particularly apparent for serious off-roaders. The I-6 also reduces 0-60 times from 7.7 seconds to 5.8, according to Land Rover.

All versions of the Defender will come with standard all-wheel drive. Depending upon trim level and package, the locking diffs are optional, however.

Buyers can opt for any of four different wheel sizes, from a steel 18-incher, to the 22-inch alloy, and they can be shod with standard tires or off-road rubber of up to 32-inch diameter.

Depending upon the engine and body size, fuel economy can run up as high as 17 mpg city, 22 highway for the new Defender.

Technology and Safety: The new Defender features the latest JLR Pivi Pro infotainment system and a wide-format 10-inch touchscreen. We like the ability of that display to present so much information simultaneously. The downside is that if you have it set to show direction of travel always up, you don’t see much of your upcoming route. One plus is that the system has the capability of accepting smartphone-style over-the-air updates. 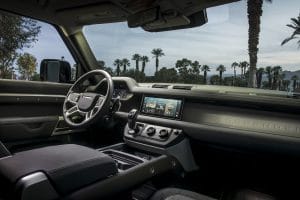 The Pivi Pro system also comes with a WiFi hotspot and standard in-dash navigation. You’ll also get both Android Auto and Apple CarPlay.

The Pivi Pro system also comes with a WiFi hotspot and standard in-dash navigation. You’ll also get both Android Auto and Apple CarPlay. The base audio system uses six speakers but you can upgrade to either a 10- or 14-speaker Meridian package.

Many of the tech features are aimed at off-road use, such as that Terrain Response Control system, and the numerous cameras aimed at making it easier to negotiate a trail. There’s also the ClearSight mirror which uses a camera to provide a slightly wider image than your conventional review mirror. It’s especially useful when you have a car full of passengers obstructing your view.

Drive Impressions: I spent the first few days in the Defender 110 SE driving freeways and local pavement. Anyone familiar with the last-generation model will likely be stunned by the difference.

“… Both powertrains are solid options, though the I-6 is particularly impressive, easily merging into freeway traffic and executing high-speed passes on Michigan roads where most drivers seem to believe 80 mph is a starting point these days …”

On-road handling is equally impressive, suggesting Land Rover worked hard to maintain the manners baked into the D7 platform for various Range Rover models. Steering was reasonably precise, with a solid road feel. There was a modest amount of understeer, as you’d expect. But we were pleasantly surprised by how well we could maneuver corners without an excess of body roll.

It was during our day at Holly Oaks that we really came to appreciate the 2020 Land Rover Defender, however. After getting use to the various controls and settings we discovered that the SUV could maneuver on, around or over pretty much any obstacle we threw at it. Sand? No problem. Deep ruts? Just raise the suspension. It ate up the park’s big rock crawl section more handily than most crossovers can deal with the everyday reality of potholed Michigan roads. 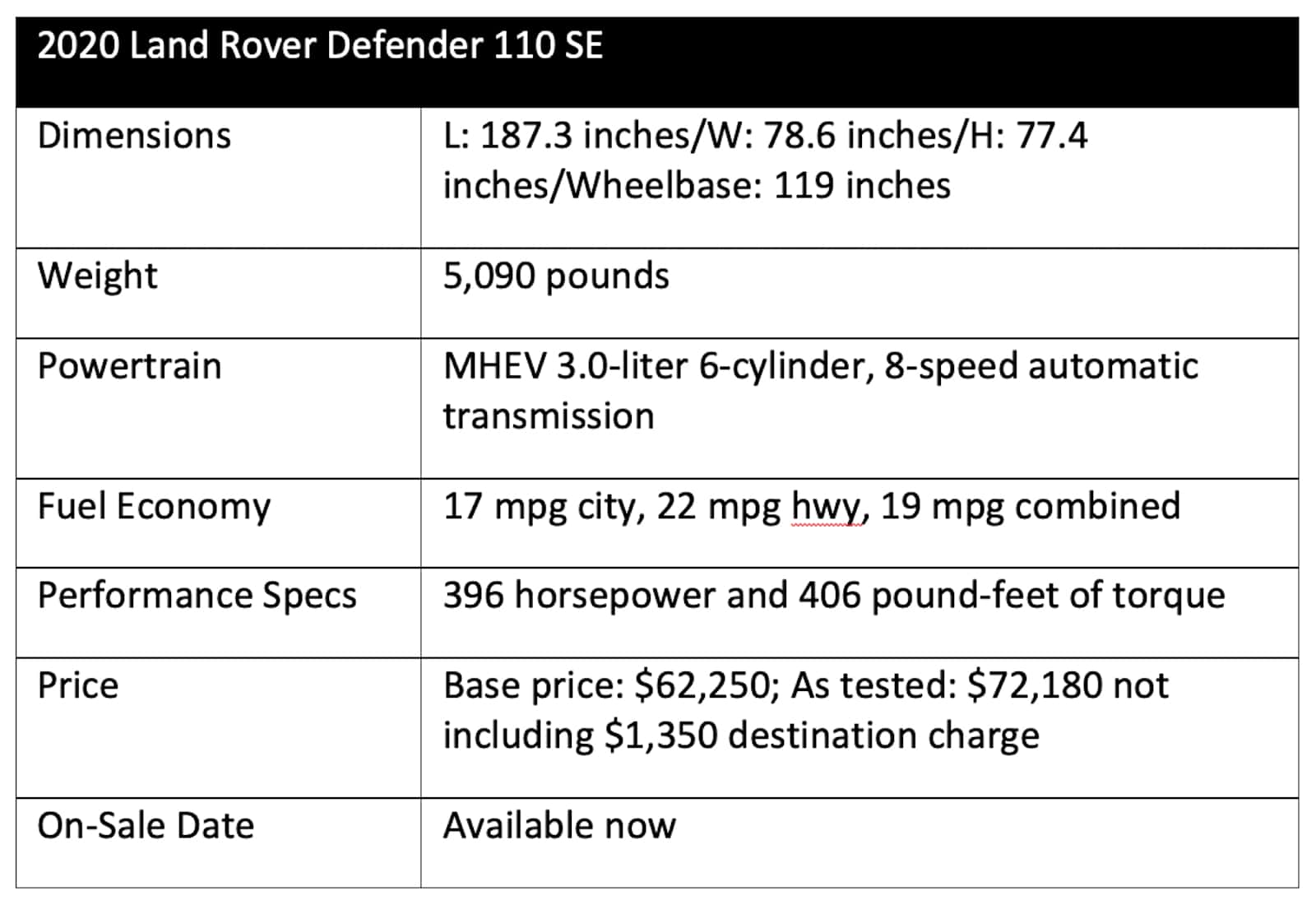 Wrap Up: There has been a big gap in the Land Rover line-up since the last Defender dropped out of production. The British marque needed a line of truly serious off-roaders, and the 2020 Defender 110 we drove absolutely lived up to its promise. It is rugged and virtually unstoppable yet, all to the better, it also proved surprisingly pleasant to drive on-road, as well.

For the moment, only the 110 is available in the U.S., with the short-wheelbase 90 to arrive next year. The starting price for the 110 is $49,900 with the turbo-4 engine. It runs up to $62,250 with the inline-six. And, of course, you can order from a seemingly endless list of options and accessories that could add thousands more to the price tag.

That said, for those who want a true SUV that can handle anything from everyday commuting to serious off-roading (or a heavy Snowbelt winter), the 2020 Land Rover Defender comes through with absolute aplomb. It is the perfect update to a classic brand icon. 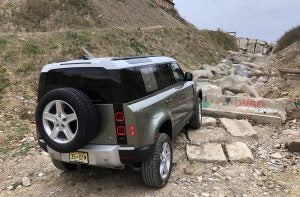 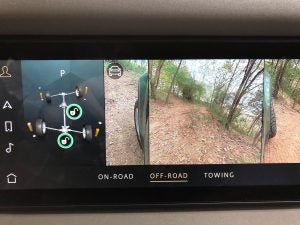 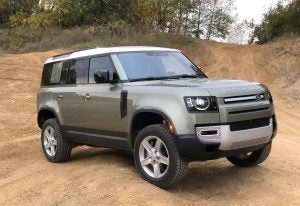