EVs on Track to Triple European Market Share This Year

But it’s unclear the surge is sustainable.

VW’s first long-range model, the ID.3 hatchback, has been a strong seller since its debut earlier this year.

European motorists may be paring back car purchases, on the whole, during this year of pandemic. However, they are embracing electrification like never before, with sales of battery-electric vehicles on target to reach 8% of the continental market this year.

That would triple the market share for BEVs from just last year, according to research by the NGO Transport & Environment. Sales vary widely from one country to the next. Plug-based vehicles – including BEVs and PHEVs – reaching as much as 75% in Norway earlier this year. But demand is clearly on the rise in all key European markets, including France and Germany, according to industry data.

Several factors appear to be at work driving the surge, starting with toughened European Union regulations, said the co-author of the report, Julia Poliscanova. “It is because of the EU emissions standards, but it is also thanks to many investments carmakers made last year,” she told Reuters news service.

EU mandates are rapidly tightening up carbon dioxide emissions. To achieve those goals, automakers must either slash the fuel consumption of their gas and diesel engines or adopt new electric drive technologies. And the situation will only grow more challenging in the years ahead. 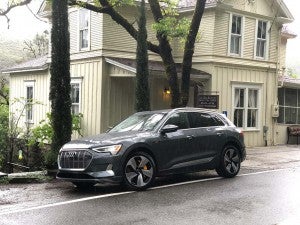 Europeans are buying many more electric vehicles this year, including the new Audi e-Tron.

A number of European nations, including France, Germany and Norway, have either set in place or are debating, target dates for ending the sale of new vehicles powered by internal combustion engines. The United Kingdom, meanwhile, is considering whether to move its own ban forward, from 2040 to as early as 2030.

Separately, numerous European cities, including Amsterdam, Paris and Hamburg, are laying out their own bans. These would prohibit vehicles from entering central urban areas while running on either gas or diesel. Motorists could use either battery-electric vehicles or switch their plug-in hybrids to all-electric mode.

While most of these bans are still years from taking effect, many motorists are already preparing by switching to BEVs and PHEVs, according to various industry analysts.

Meanwhile, regulators are taking a carrot-and-stick approach as they attempt to kick-start a car market hammered by the coronavirus pandemic. EV sales also have gained traction thanks to incentives a number of countries are offering to car buyers, many of those givebacks focused on zero-emissions vehicles.

The Model 3 is a strong seller in Europe, and those numbers are likely to rise once Giga Berlin is up and running in Germany.

But it is unclear whether the trend will hold once those subsidies are lifted, cautioned the European Automobile Manufacturers Assocation. “It is difficult to make any predictions on future long-term shifts in consumer behavior from such ‘artificial’ growth driven by subsidies,” it said in a statement.

Indeed, there are several reasons to question whether the surge in demand for EVs will hold going forward. For one thing, demand for SUVs have also risen sharply, up 39% for the first half of the year.

That includes not only gas and diesel offerings but also electrified utility vehicles such as the Jaguar i-Pace. And there are plenty of other all-electric SUVs in the works, including the Volkswagen ID.4 and the battery-powered version of the Macan Porsche is developing.

(Oil-rich Norway is the land of the battery-electric vehicle.)

On the whole, European EV buyers are expected to see their options grow substantially by mid-decade, with scores of new entries covering a broad spectrum of the market, from microcars to exotic supercars, set to debut in the next few years.