Bollinger’s New Battery Technology Could Give it a Leg Up on Competitors Like Tesla, Rivian 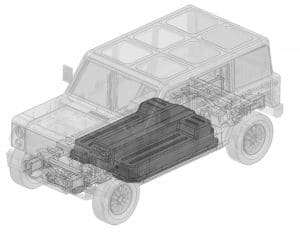 Bollinger Motors recently applied for a patent on its new battery pack design.

The U.S. EV market is set to get a lot more crowded in the next several years and, as the heart of every one of those vehicles, the battery pack could provide a competitive edge. So hopes Bollinger anyway, the suburban Detroit startup filing for a patent on a new battery pack design and management system that it says will save space, keep the pack cooler and improve the charging process.

The nascent operation, which plans to introduce an assortment of heavy-duty pickups, SUVs and chassis cab models, has begun generating a buzz among investors, even before it rolls out its first production vehicle. But while founder and CEO Robert Bollinger is looking to raise about $50 million to get production going, he has cautioned that he isn’t quite ready to sell or take on partners yet.

“The heart of every EV is the battery, so it was crucial for us to develop our own battery pack in-house,” said the CEO. “Our engineering team has created a pack with high-strength structural properties, exemplary cooling features, and state-of-the-art software.” 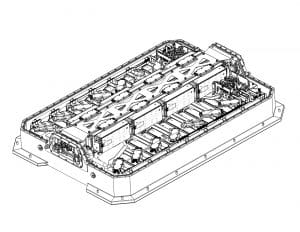 Bollinger originally announced plans to debut with the B1 electric pickup and B2 SUV but recently revealed a new chassis cab model. All three will target the heavy-duty segment, rather than going after more mainstream market where competitors like General Motors and Tesla plan to compete with offerings like the GMC Hummer and Cybertruck, respectively.

Those two manufacturers, in particular, have put a premium on developing their own batteries and packs from ground up, Tesla last month revealing new production methods that it said could slash costs by as much as half. GM also hopes to reduce costs while addressing charging times and range with its new Ultium batteries.

Bollinger will continue to turn to outside vendors for its own batteries but has developed a new pack design and battery management system that it claims will save space and improve cooling, according to its filing with the United States Patent and Trademark Office.

Among other things, it will allow the startup to offer a variety of different pack sizes, from a modest 35 kilowatt-hours all the way up to 175 kWh and beyond. The original plan for the B1 and B2 models called for 120-kWh packs, which were to deliver about 200 miles per charge. Bollinger has not revealed what sort of additional range its new pack design might allow for. 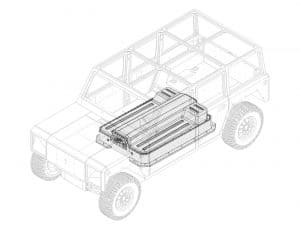 The patent filing also shows that Bollinger’s battery management system is capable of operating at both 350 volts or 700 volts. The higher capacity would be more costly but offer several advantages, starting with a much faster charging time. Using the latest 350-kilowatt public charger, the company said in a statement, a 120-kW pack could be charged in as little as 75 minutes.

The pack design has batteries arranged in 35-kWh “strings,” Bollinger explained, making it easier to deliver different capacities. The pack, meanwhile, straddles a structural I-beam that helps channel away heat that could otherwise reduce the life of the batteries.

The company said it “will manufacture battery packs for its own vehicles – as well as make them commercially available for standalone applications – starting in 2021.”