For those who want a luxury sedan, with the flexibility and space of an SUV and the performance of a sports car. 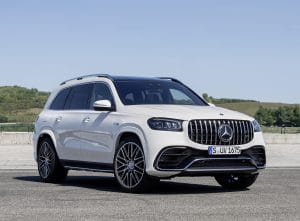 With a six-figure price tag, the 2021 Mercedes-AMG GLS 63 better check off all the boxes — it does.

Massive, powerful, imposing, few SUVs on the market have the eye-catching appeal of the 2021 Mercedes-AMG GLS 63. But, after a week of driving, one question came up over and over again: “What’s with those wheels?” More about that later.

The utility vehicle alternative to Mercedes’ traditional flagship, the S-Class sedan, the GLS 63 is about as lavish and exotic as you can get before you move into Maybach territory. It’s loaded with virtually every possible feature you can find in the Mercedes catalog, though the real draw is its twin-turbo V-8 which makes a whopping 603 horsepower – enough, a colleague recently pointed out, to launch this 5,900-pound behemoth to 60 about as fast as the new Corvette Stingray.

Overview: In today’s SUV-crazed market, the GLS line has become the go-to alternative for many traditional S-Class buyers. It essentially offers the same level of amenities, as well as the taller ride height and a third row. With the GLS 63, meanwhile, you wind up with the world’s most powerful three-row SUV. 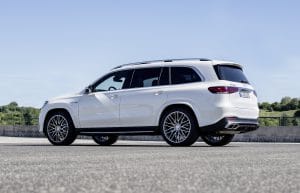 The new AMG GLS 63 is a full 9 inches longer than the next step down the Mercedes SUV ladder, the GLE.

Exterior: Like a Mercedes S-Class on steroids, the GLS is imposing and likely to turn heads. To give you a sense of size, the SUV has a nearly 9-inch longer wheelbase than the next step down in the brand’s SUV line-up, the GLE.

Seeing the new GLS63 fly up in your rearview mirror you’ll immediately note the new face, with a larger, slightly less angular, and more 3-dimensional grille, framed between new LED headlamps. The AMG version, as one would expect, features larger air intakes under the front bumper, as well.

“… There’s a moderate use of chrome, including the surround framing those air intakes, as well as the huge side windows …”

The hood features a nice power bulge that clearly hints at what lies underneath. The roofline has a gentle curve to it, though it remains tall enough to provide ample headroom for passengers in all three rows. Plenty of glass in the power liftgate, meanwhile, helps provide clear vision of the road all around. 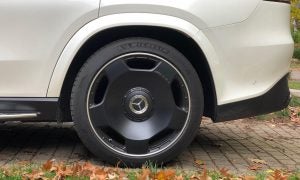 The GLS 63 can be ordered with a variety of different wheel and tire packages, meanwhile, starting with standard 21-inchers. There’s a 22-inch option, but my test vehicle featured positively huge 23s. They are an odd choice, not because there aren’t plenty of folks who think bigger-is-better when it comes to wheels, but because of the design which, as the image here shows, looks a lot like a matter gray pie plate with almost incidental spokes.

To say the least, these wheels routinely became the first topic folks brought up when asking about my GLS. (And, at $4,950, they accounted for a big chunk of the option bill for the test vehicle.)

Interior: The cabin of the 2021 GLS will quickly remind you of the S-Class, albeit with a bit of a climb-in and higher seating position. There’s also the plus of having a surprisingly roomy back row with plenty of legroom and headroom. While not ideal, one could imagine sitting back there for a lengthy trip. One of the neatest features is how the power fold function works. Press the button and the second row automatically moves to the optimum position to allow the back row to fold over.

As with the S-Class, the instrument panel features twin 12.3-inch LCD displays, one a reconfigurable gauge cluster, the other for the new MBUX infotainment system. The overall look of the IP has been upgraded and it’s a handsome design with new air vents underneath the touchscreen and actual, tactile control for the climate system below them. 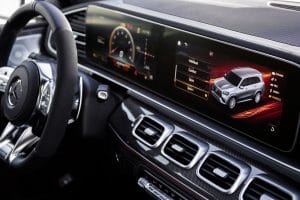 The touchpad controller on the center console has a wristrest that makes it easier to operate without bouncing around on rough roads. Immediately behind is a huge, butterfly-covered storage bin. Indeed, storage nooks abound throughout the GLS, as do USB connectors and cupholders.

Powertrain: The fast-beating heart of this beast is a twin-turbo 4.0-liter V-8 which, like many of the latest AMG offerings, is paired to a Mercedes EQ 48-volt “mild” hybrid system that can be thought of as an electric supercharger. The hybrid package serves multiple purposes, starting with the SUV’s fuel-saving start-stop system. It further reduces consumption by powering the air conditioning compressor, power steering and other accessories that would traditionally require a power-robbing belt drive.

Plant the throttle firmly to the floor, however, and the hybrid system delivers its neatest trick, briefly punching out an additional 21 hp and 184 pound-ft of torque. That’s on top of the 603 ponies and 627 lb-ft the biturbo V-8 itself makes. Officially, the AMG GLS 63 can launch from 0 to 60 in 4.1 seconds, with a 174 mph top speed.

“… our own stopwatch came in under 4 seconds and we’ve seen numbers as low as 3.6 seconds elsewhere …”

Power is directed through a 9-speed automatic transmission to all four wheels through the AMG version of Mercedes’ 4Matic system. That means that, under normal conditions, it heavily biases torque to the rear axle. 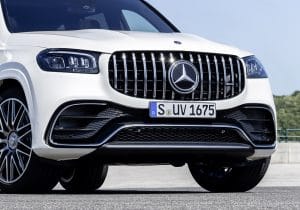 Technology and Safety: Like the Mercedes S-Class, the GLS is absolutely awash in high-tech features, the 63 getting tweaked to emphasize performance. That includes the special pods on either side of the steering wheel that allow you to quickly adjust setting for things like the exhaust note, suspension damping, throttle response and gear shifts. The right side has ready-set driver modes, as well as an Individual Mode that can be customized to the driver’s preferences.

The instrument panel, as earlier noted, combines twin screens, one for the gauge cluster, the other for infotainment. The old COMAND knob is gone, replaced by  laptop-style touchpad. There are additional touch sensors on the steering wheel and the 2021 GLS63 now integrates the MBUX interface which allows you to operate a wealth of vehicle functions by voice. Just say “Hi, Mercedes,” to activate the cloud-connected system which will remind you of voice assistants like Amazon’s Alexa. It can perform many of the same duties, like calling up weather, though it’s not got quite as good a repertoire.

There are the requisite features like Apple CarPlay and Android Auto, a 4G LTE WiFi hotspot and lots of USB connectors, of course. 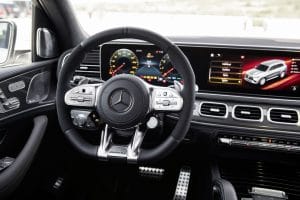 The gauge cluster on the new GLS 63 can be reconfigured by the driver.

As to safety gear, the list of advanced driver assistance systems is numbingly long, with the usuals, such as forward-collision warning with pedestrian detection and automatic-emergency braking, blind-spot warning, lane-departure warning and lane-keeping assist. The adaptive cruise control system, meanwhile, is one of the more advanced on the market and provides limited semi-autonomous functionality, though you can’t take your hands off the wheel long before it will warn you to retake control.

Driving Impressions: At nearly three tons, you might be in for a real surprise when you stomp on the throttle for the first time and feel yourself sink deeply into the GLS 63’s plush leather seats. It helps that not only has Mercedes added an extra 26 hp and 66 lb-ft of torque when compared with the old SUV’s 5.5-liter V-8. But then factor in the power coming from the EQ hybrid system. What you get is essentially instant-on acceleration that is far smoother and linear than almost anything else in the big SUV class.

At 6,000 pounds, there’s a lot of mass to be flogging around and you do feel it, especially in Sport Mode on the sort of rough roads we have here in Michigan. That said, I was pleasantly surprised at how well the GLS 63 could handle tight corners. Steering proved to be precise, with clear road feel and just enough boost.

The active damping system stiffens up 25% in Sport, 40% in Sport+ Mode. So, to make potholes all but vanish, one simply needs to use that steering wheel-mounted control to switch back to Comfort. 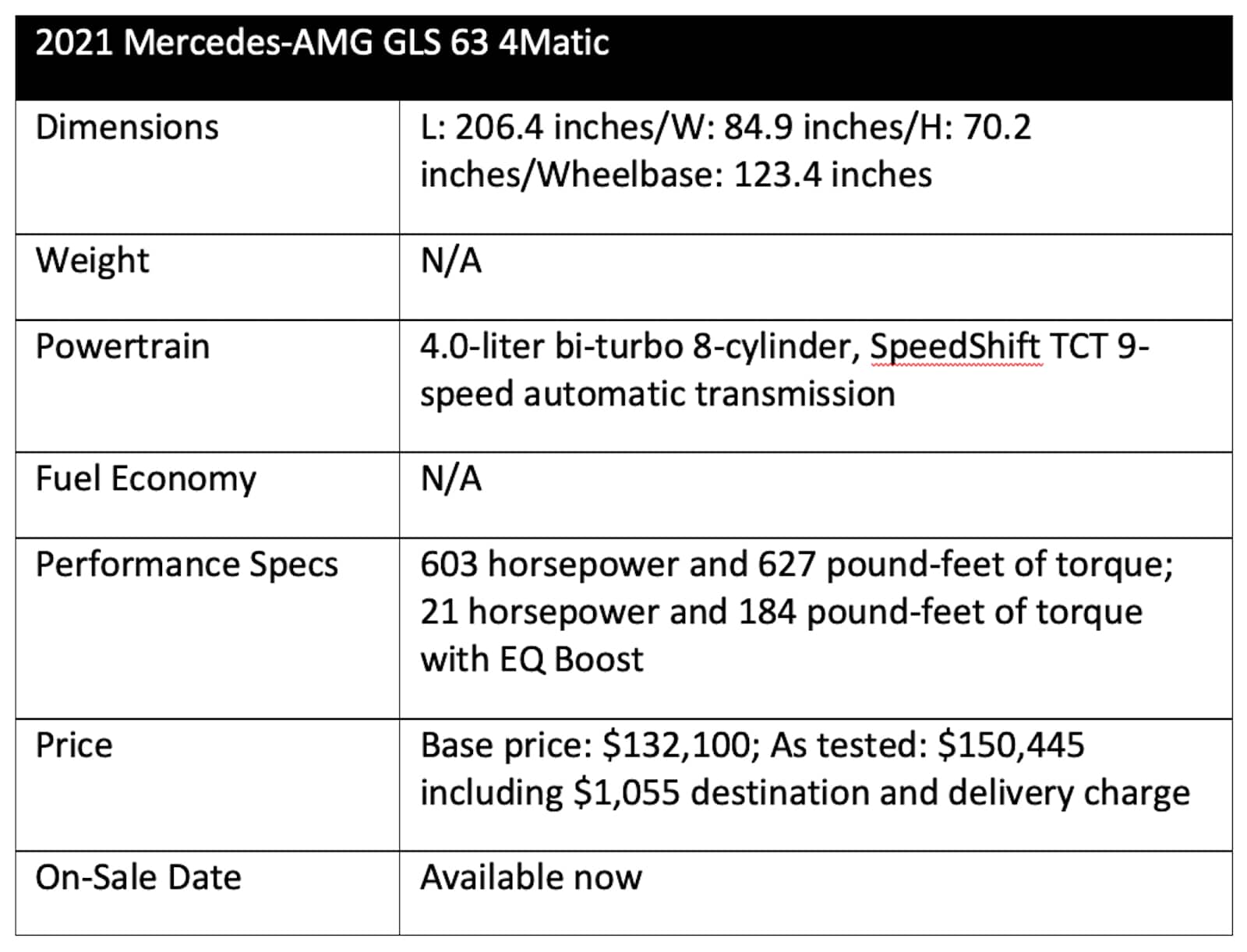 Handling and stability are further enhanced by a limited slip rear differential – and by yet another function of that EQ mild-hybrid technology, the GLS 63’s, Active Ride Control anti-roll system.

We do question the benefits of the 23-inch tires which add a significant amount of unsprung mass to the suspension and can make the car feel a little jittery, especially on rough pavement.

If there is one real gripe, however, it’s the Mercedes lane-keeping system which relies on the car’s big brakes to swerve you back into your lane. The approach is far more abrupt than seems necessary and doesn’t just nudge you back but makes you feel like the car is being slowed down. I’d expect most performance-minded drivers will clearly shut the system off.

Wrap Up: The 2021 Mercedes-AMG GLS 63 4Matic is neither for the faint of heart or short of cash. It is a luxury SUV that puts strong emphasis on the “Sport” side of that equation. That said, it is lavishly equipped and provides ample room with its three rows for passengers and cargo.

At 14 mpg City, 20 Highway and 16 Combined (unofficially), it is a thirsty beast, but its barrel-sized fuel tank means you can go for more than 500 miles between fill ups on extended trips – if your bladder can hold out.

For those who want the accoutrements of a luxury sedan, the flexibility and space of an SUV and the performance of a sports car, the GLS 63 hits all the right buttons. 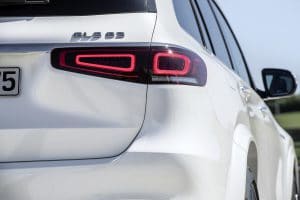 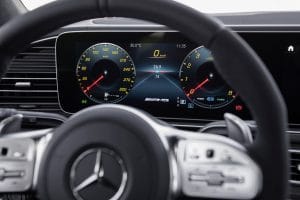 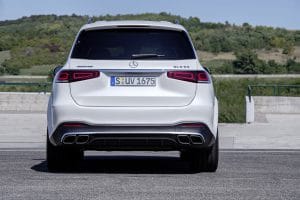