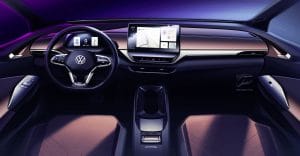 Volkswagen offered an early look at the interior of its soon-to-debut ID.4.

Volkswagen is readying to show off its first-ever fully electric vehicle for the U.S. market, the ID.4, later this month by offering some insight about how the vehicle’s interior was developed and the role that light plays in its form and function.

The new ID.4 interior is designed to be roomy and comfortable, offering plenty of space using a modern design aesthetic. The company is using lighting to not only provide ambiance but also to help the driver understand what the vehicle is doing at given moments.

“Freedom on the outside, free space on the inside,” said Klaus Zyciora, head of Volkswagen Group Design, describing the design goal of the interior. “The ID.4 brings a new sense of space to its category thanks to the new MEB platform, our modular electric drive matrix.” 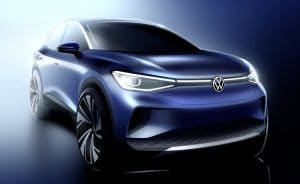 Zyciora led the team that developed the vehicle when he was Head of Volkswagen Brand Design, he noted that the goal was to make the new EV striking yet function on the inside while finding ways to offer even more room.

A simple example is how the door handles lie flush with the body and come out with electric unlocking. Getting in and out of the vehicle is easy enough due to the large door openings and the high position of the front seats. The rear seat bench offers plenty of space for passengers. It is also easy to stow away plenty of luggage — the cargo area boasts 30.3 cubic feet with the rear seat up.

The ID.4’s interior design is aimed at matching the exterior in tone and form, officials describing it as “flowing and lightweight, focusing only on the essential.”

As a result, designers set up the dashboard to make it look like its floating, especially since it’s not connected to the center console. The automaker offers a fixed panoramic glass roof, giving occupants an unrestricted view of the sky. When it gets dark the available 30-color ambient lighting can be adjusted to set striking highlights in the vehicle interior. 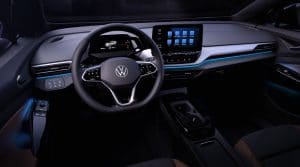 The new ID.4 interior is designed to offer plenty of space while using light to provide ambiance and function.

The ID.4 will feature ID. Light — a light strip below the windscreen to support drivers in a host of situations with intuitive lighting effects in different colors.

For example, ID. Light signals to the driver that the vehicle’s drive system is active and that the car has been unlocked or locked. It accentuates information issued by the driver assist and navigation systems and signals braking prompts and incoming phone calls.

The interior of the ID.4 is dominated by calm, sophisticated colors called Lunar Grey and Galaxy Black. The steering wheel, steering column, the housings of the display and control panels in the doors come in trendy Piano Black or modern Electric White. The bright color sets a futuristic highlight throughout the vehicle interior and underlines its clear-cut design.