Ford targeted due to product concerns at Ontario plant. 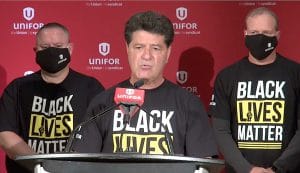 Jerry Dias, Unifor president, announces that Ford will the the target company in this set of contract talks.

Ford Motor Co. offcials said they welcome the opportunity to set the pattern in negotiations with Unifor on a new contract for auto workers in Canada.

Fiat Chrysler Automobiles N.V. and General Motors of Canada will be expected to sign the pattern agreement negotiated with Ford once its finalized. Unifor’s contract will all three companies expire Sept. 21 at 11:59 p.m. but Unifor will delay action at FCA and GM until the Ford contract is complete and ratified.

“Ford of Canada has a long history of working collaboratively with Unifor and looks forward to reaching a collective agreement in order to remain operationally competitive amidst intense global competition,” the company said in a statement.

“In light of global economic uncertainties, it’s more important than ever to maintain jobs in Canada. We’ll be asking our employees to work with us to help shape this new reality.” 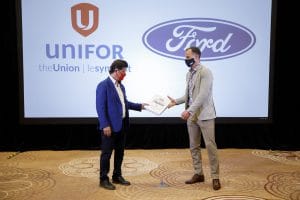 Edge sales were up 3% to nearly 140,000 units in the U.S. last year, while sales were up 4% in Canada last year. Customers are loving the all-new Edge ST, with U.S. retail sales up 41% in 2019. We are building on that success with the launch of the Edge ST-Line, which is now available for order, plus upgraded features for the 2021 Edge, he noted.

As well, the Nautilus plays and will continue to play an important role in Lincoln’s growing SUV portfolio which includes the Corsair, Aviator and Navigator. Lincoln is investing in growth segments including SUVs, he added.

Ford employs approximately 7,000 people in Canada, while an additional 18,000 people are employed in the more than 400 Ford and Ford-Lincoln dealerships across the country. 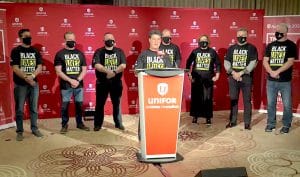 Dias said Ford was named the target due to concerns about the company’s Oakville, Ontario plant.

Kantautas said, “It is a shared responsibility to ensure the company can emerge from the COVID-19 crisis positioned for future success. Together, we can strengthen the business case for auto manufacturing in Canada.”

So far, the lack of a commitment from the company to build a new product at Oakville prompted Unifor to target Ford in negotiations.

“I chose Ford because it is important that Ford understands what our vision is in the short and long term,” Dias said as he made the announcement. 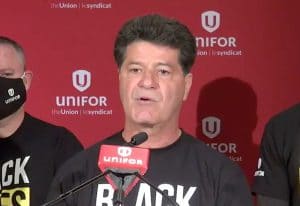 Dias said there isn’t a clear product plan for the Oakville plant.

“The conversations I’ve had with Ford have been instrumental in the decision. The bottom line is the group that is most vulnerable is the workers in Oakville,” said Dias, who also noted the Canadian government also should invest in a national auto strategy.

He said the last Ford Edge, manufactured in Oakville, is set to roll off assembly lines in 2023 with no product replacement coming down the pipe.

He said it was important to Unifor’s Ford’s section that the company chosen “understood we need product,” and “understood the importance of their footprint to the community.”