U.S. auto sales and jobs were heading down even before the pandemic hit.

President Donald Trump made a campaign stop in Michigan during which he talked up how much he has helped the auto industry.

Donald Trump, speaking to a rally of campaign supporters in Michigan on Thursday, made a long list of false claims about the auto industry, among other things saying he “saved” it during his first term.

Pressing to keep swing state Michigan in the Republican camp during a difficult run for a second term, Trump covered a variety of topics while attacking not only his Democratic challenger Joe Biden but also the state’s Democratic governor Gretchen Whitmer.

Fact checkers found a long list of inaccurate statements and claims on matters as diverse as drug prices and the U.S. economy which, Trump declared was “the greatest economy in the history of the world” prior to the coronavirus pandemic. But some of the biggest false claims and outright lies centered around the auto industry, starting with the president’s assertion that he “saved the U.S. auto industry.”

If anything, the domestic industry was running at a record pace when Trump took office. It has been weakening since then, though sales did finish slightly better than forecast in 2019. But, even before the COVID-19 pandemic forced a two-month shutdown of manufacturing across North America, concerns were mounting that the U.S. car market was entering the downward part of the economic cycle, with 2020 sales forecast to drop at least 2%. 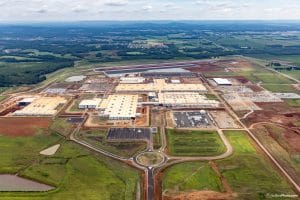 Mazda and Toyota are pumping an extra $830 million into their joint facility in Alabama. The plans for a new plant in the U.S. were settled before Trump’s win.

“You better vote for me. I got you so many damn car plants,” Trump told his audience at the rally at MBS International Airport near Saginaw, Michigan. “And we’re going to bring you a lot more.”

The reality is quite different. While several plants have opened since January 2017, including a new Volvo assembly line in Charleston, South Carolina and a Mercedes-Benz factory nearby, almost all were committed to during the Obama administration.

Meanwhile, there have been numerous plant closings, including the big General Motors assembly line in Lordstown, Ohio, and two GM parts facilities. Another GM assembly plant in Michigan was scheduled to shut down but is now being converted to build electric vehicles.

All told, Michigan’s automotive workforce was already down by 2,000 people, or about 5% during the Trump administration before the pandemic hit. 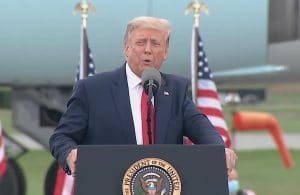 Trump falsely claimed that he’s gotten automakers to build many new plants in the U.S.

Five new auto factories have been announced since Trump took office, including one in suburban Detroit that will see Fiat Chrysler Automobiles convert a closed engine plant to build new Jeeps. Toyota, meanwhile, is completing work on a new assembly plant in Alabama. Set to operate as part of a joint venture with Mazda, it was formally announced in 2017, though initial planning began before the November 2016 election.

The most significant recent announcement is the Tesla plant that will build Cybertrucks outside Austin, Texas. But Tesla has also announced that it is building another plant in Berlin after opening its first foreign factory late last year in Shanghai. Tesla CEO Elon Musk has repeatedly said the company needs to build plants where it sells vehicles, and during the process of searching for the site for the next U.S. Gigafactory, he pointed out it was necessary to have another U.S. location to make it easier for distribution to the East coast.

Two other small facilities include French firm Navya, which will assemble driverless shuttles in Saline, Michigan, using kits brought in from France, and an autonomous vehicle plant planned by Waymo. Together, those will create just 450 jobs.

Significantly, there has been no sign of movement bringing production back to the U.S. from either Mexico or China, two key demands that Trump began making as he launched his formal bid for the White House nearly five years ago.

GM shut down its Lordstown, Ohio assembly plant despite Trump’s insistence that the company keep it open, and a promise to local workers there that it would remain in operation.

That was one of the goals of the USMCA, the modest update of the North American Free Trade Agreement that Trump frequently attacked. The new trade treaty, among other things, raises the wages of some Mexican autoworkers, something the administration claimed would encourage shifting jobs back to the States. So far, however, there has been no indication that is happening.

Trump has taken a hard line on trade, declaring trade wars “easy to win,” but, if anything, the ongoing tit-for-tat battle with China has cost the U.S. both jobs and production, as TheDetroitBureau.com recently reported.

The U.S. exported 192,210 vehicles to China in 2019, according to U.S. government data, up from the 163,618 shipped there the year before – but down from 262,483 in 2017 when the president took office. The record was set under President Barack Obama in the 2014 when American plants provided 314,580 vehicles for the Chinese market. The export of U.S.-made auto parts to China has also tumbled as that country enacted new 25% vehicle and 5% parts tariffs in response to U.S. duties.

And the odds of reviving exports is uncertain, Joe Langley, the associate director of automotive research for IHS Markit, warned during a meeting of the Automotive Press Association last month. That’s because “Vehicles previously exported from (the U.S.) to China are now being relocated there,” said Langley. 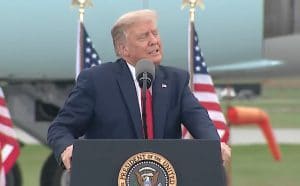 During his Thursday rally near Saginaw, Michigan, Trump claimed he “saved” the auto industry.

Among those impacted are Ford, Mercedes-Benz and BMW which used to produce all of its X model SUVs in South Carolina. The popular X5 is now being produced in Asia for the Chinese market and “If the tariffs undermine the competitiveness of BMW production and sales in the US, the result could be strongly reduced export volumes with negative effects on investments and jobs in the US,” BMW spokesperson Kenn Sparks told trade publication Automotive News.

During his Michigan appearance, Trump made a number of other questionable claims, among other things telling his audience that after speaking with Japanese Prime Minister Shinzo Abe, “five new car companies are coming to Michigan.” There have been no such announcements and, if anything, some of the smaller Japanese automakers have pulled out of the U.S.

While U.S. new car sales were expected to decline this year, even before the pandemic, the industry is now forecast to suffer a big dip for 2020 and a slow recovery that could extend through mid-decade, according to researchers including J.D. Power, AlixPartners and IHS Markit.

Trump’s pitch in Michigan – and especially to auto workers many of whom shifted to the GOP column in 2016 – is understandable in what is a tight race. Four years ago, he captured the Great Lakes State by 0.2%, or an average two votes for every precinct. Michigan was one of four swing states that gave Trump a win in the Electoral College despite losing the popular vote nationwide.

The president made numerous other questionable comments during his appearance near Saginaw repeating, among other things, the claim he was once given an award as “Man of the Year” while visiting the state. He has not disclosed who handed out the honor and it has not been verified by any news organization.

During the Michigan campaign rally, Trump took repeated shots at Biden, insisting he will not be good for either the economy or the auto industry. But there is one criticism the president did not repeat. A decade ago, the Obama/Biden White House pushed through a major bailout of General Motors and what was then Chrysler. At the time, the rescue program was billed as saving as many as 1 million jobs, including those of many attending the president’s Thursday event. Trump, however, was one of the most outspoken critics of the bailout measure at the time.