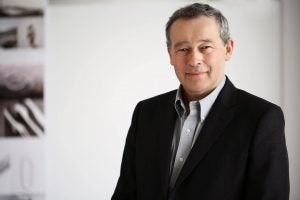 It’s been six years since veteran automotive engineer Peter Rawlinson unexpectedly tendered his resignation at Tesla – where he helped develop the critical Model S sedan – so he could head off to launch his own electric vehicle company.

Lucid Motors was one of many startups hoping to get U.S. motorists to plug into the new technology, though a sizable share of them, including the likes of AMP, LeEco and Faraday Future, have since short-circuited, leaving many to question whether Rawlinson’s venture would likewise collapse. But while a bit behind schedule, Lucid this week proved it isn’t going away, the company unveiling the production version of its first battery-electric vehicle, the Lucid Air sedan, while teasing a second offering, the Gravity SUV.

Is Lucid the “Tesla fighter” that many observers have been waiting for? That was just one of the questions TheDetroitBureau.com posed to the British native Rawlinson during a lengthy one-on-one interview ahead of the Lucid Air’s formal unveiling.

(Check out the Q&A with Lucid’s design chief Derek Jenkins.) 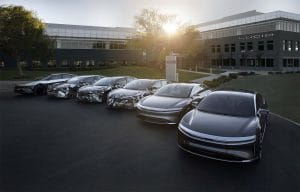 An assortment of Lucid Air prototypes line up outside the company’s HQ in Newark, California.

TheDetroitBureau: There’ve been a lot of skeptics who questioned whether you would make it this far. Do you feel vindicated now that the Lucid Air has been unveiled?

Peter Rawlinson: I’ve had all the rocks thrown at me. People have said it’s vaporware, it’s bullshit, you can’t do it. Well, I think some people are a bit surprised now that we’re taking it to the next level. I think they’re surprised now. I’m not ready to celebrate. I’ve been here before. I know what this is like getting the car into production. I know that the next six months (leading up to the launch of production) will be damn hard work. Then we can have a sip of champagne. When I see some cars in customers’ hands, that’s when I’ll say, “Good job, guys.”

TDB: Lucid is being compared to Tesla, no surprise. But you actually worked there at a critical time, during the development of the Model S, didn’t you?

Rawlinson:  I was in England and got a phone call from Elon Musk, and he asked me to come out and be his chief engineer. What I found was a complete disaster and the first week I had to cancel the program and (Musk) let me start over from scratch. 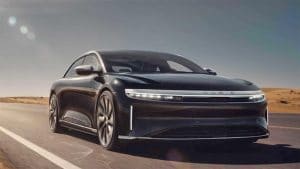 Lucid’s Rawlinson expects the Air, which the company says will travel 517 miles on a single charge, will get the same rating from the EPA.

TDB: What did you learn while there?

Rawlinson: I was already an established chief engineer but I think what I learned from my boss was to recognize what was possible. I realized I wasn’t thinking big enough. (Elon) taught me to think big and that’s what we’re doing here.

TDB: You started teasing some impressive numbers ahead of the Lucid Air launch, starting with a range of more than 500 miles, or nearly 25% more than the longest-range Tesla. These are preliminary figures, though. Can you hit them once actually in production?

Rawlinson: I’m pushing for even better numbers once the EPA completes its test. We’ve just been modest and humble in the math we use. (Once the final figures are calculated) we expect to be something like 17% more efficient than Tesla. 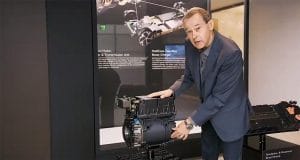 Rawlinson said that the company is working on a GT edition that will put out 1,300 horsepower.

TDB: You’ve taken an expensive path to get there using technologies like silicon carbide MOSFETs rather than the less costly electronics competitors such as Tesla and Audi are using. What are these and how does that pay off?

Rawlinson: These are solid state on-and-off switches, basically and they are much more efficient than those older technologies. It’s all part of what I call “smart” range. We were originally talking about needing a 130 kilowatt-hour battery just to get 400 miles range. What I’m pleased about is that by increasing the car’s overall efficiency we could reduce the size of the pack (to 110 kWh) and achieve over 500 miles.

TDB: Not many people know this but you produce the battery pack for the Formula E race series. Did working with that program help?

Lucid’s Rawlinson said the company applied a lot of what it learned from its motorsports experience to its new vehicles.

Rawlinson: We’ve learned from motorsports and that has gone directly into the Lucid Air. It’s true we’re not doing our own cells. We’re buying them from (Korean battery company) LG Chem, but we developed the cells with LG Chem and they’re very special. You can’t buy them over the counter. (Editor’s note:  During a media presentation, Rawlinson noted that Lucid uses a modified version of the Formula E pack for the new Air sedan and claims that its racing experience helped improve the performance and reliability of the battery pack.)

TDB: How does that play into what Lucid is planning to build?

Rawlinson: There are three aspects of our business. First of all is miniaturization. That will allow Lucid Air to have more space for the occupants. But it also will help make smaller, more affordable cars. The next thing is efficiency. That means less batteries, lower cost, less weight, therefore making our cars more affordable with comparable range. Then there’s mass production. Economies of scale make (things) more affordable, and then we can share that cost savings with our customer. Cost is the next obstacle for the widespread adoption of electrification. 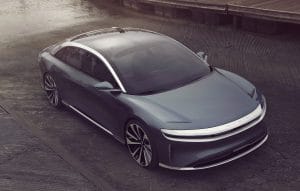 Rawlinson noted that the company already has second vehicle teed up: an SUV that sits on the Air chassis.

TDB: You’re planning to expand the line-up, an SUV coming next (the Lucid Gravity). What else are you looking at?

Rawlinson: The (Gravity) will be based upon the Lucid Air platform, like the Tesla Model X was based on the Model Y. We’re going to be a bit more SUV-like with our offering. Then we’re going to do another, more affordable platform that’ll be for smaller cars.

TDB: What are you looking at in terms of production volumes?

Rawlinson:  In calendar-year ’21, 8,000 (vehicles) maybe. We’ve got the factory space in Arizona to go up to 400,000 units a year. I would like to be making a million cars a year (with additional plants) in 2026, but talk is cheap. We’ve got to get Lucid into production next spring … and get the quality right.

TDB: Then there’s the question of profitability. We know that’s been a long slog for Tesla.

Rawlinson: Now that depends what business plan we go by. We can be profitable in 18 months if we just make the Lucid Air. But I want to grow the company and accelerate it on a trajectory that’s going to have an impact upon global warming. I want to get the next platform and I want to invest to get our energy storage business going because I think that’s going to be huge. I also want to do powertrains for electric aircraft which I think is going to be huge in the next decade. I’m not going to go into the aircraft business, but just supplying powertrains. I also want to continue doing something with racing energy storage. And we could also help other (car) companies get into electrification using our powertrains. 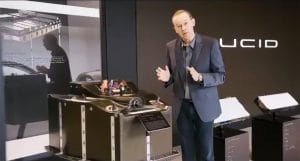 The Lucid Air runs on a 900-volt system compared with the 800-volt model used by the Porsche Taycan, which Rawlinson said will draw some comparisons.

Rawlinson:  Look, we’re going to go public … in the next couple of years. And I think we’re going to have significant value as the world recognizes we’ve got this fantastic technology. So, watch this space.

TDB: One last question. You’re frequently billed as a “Tesla fighter.” Are they your primary competitor?

Rawlinson: No, I think (it’s) Mercedes-Benz. We’re going after the luxury market (with Air) and it is dominated by the S-Class Mercedes, and the BMW 7 Series and Audi A8. Those are our competitors. I’m not competing with Tesla right now (though) every road test will compare us to Tesla and, of course, the Porsche Taycan. But hear it from me, we’re going after the big guns.