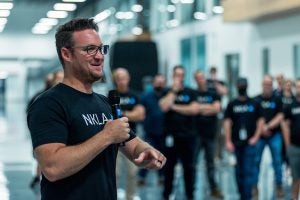 Trevor Milton resigned from his role as chairman of Nikola Corp. amidst growing concerns about allegations of fraud by the hydrogen- and battery-truck startup that reportedly have triggered a pair of federal probes.

The Nikola founder, whose net worth briefly soared to $9 billion after the company went public in June, will be replaced by Steve Girsky, a former General Motors vice chairman.

Girsky led a merger earlier this year that allowed Nikola to get listed on the NASDAQ exchange. Girsky also helped negotiate a partnership between GM and Nikola announced earlier this month.

The chaos surrounding Nikola was triggered by a harsh report from short-seller Hindenburg Research. Titled “How to Parlay an Ocean of Lies into a Partnership with the Largest Auto OEM in America,” it outlined what it claimed was “an intricate fraud built on dozens of lies” by Milton and his team to win backing for the company. Formed in 2015, Nikola plans to produce a mix of light- and heavy-duty trucks running on both hydrogen fuel-cell and battery powertrains.

As he has since the Hindenburg report was released Sept. 10, Milton continued to denounce its claims during the weekend. In a tweet on Sunday he described them as “false allegations.” 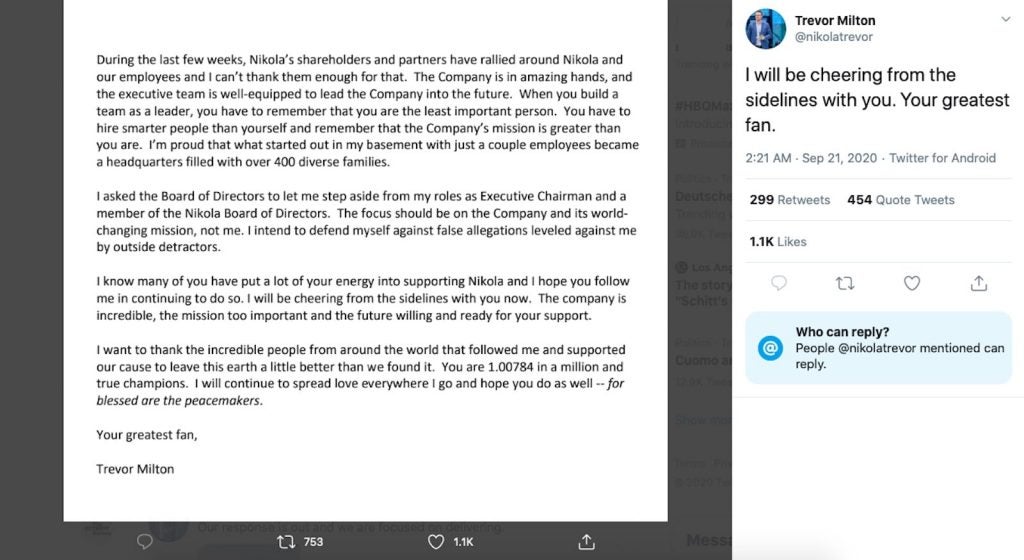 Milton addressed employees in a tweet announcing his resignation.

However, the 35-year-old Nikola founder said in a company statement that the crisis had forced him to make “the difficult to decision to approach the board and step aside (because) the focus should be on the company and its world-changing mission, not me.”

For his part, Nikola CEO Mark Russell said in the company statement that, “We remain committed to delivering on our objectives and creating value for our shareholders.” Russell added that, “Our priorities remain unchanged and, in collaboration with our partners, we are laser-focused on executing on our strategic initiatives and laying the groundwork to become a vertically integrated zero-emissions transportation solutions provider.”

(Battle between Nikola, Hindenburg heats up with SEC probe.)

Founded in 2015 in Salt Lake City, Nikola initially focused on producing a pair of heavy-duty semi trucks that would use hydrogen fuel-cell technology to produce zero emissions. Fuel-cell technology is seen as a potential alternative to battery power because it can provide significantly longer range. The downside is a lack of hydrogen fueling stations, but Nikola laid out plans to set up its own distribution network along major trucking routes. 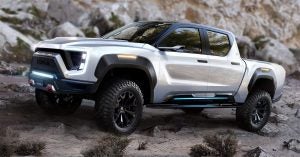 As part of their deal, GM will provide Nikola with fuel cells and batteries and assemble the Badger pickup.

Now based in Phoenix, Nikola announced a second, significantly different product line this past February. It laid out plans to produce a full-size pickup, the Badger, and enhance its appeal by offering several different versions. One would run solely on batteries, the other designed to use a hybrid hydrogen and battery-powertrain system.

The Badger was announced about the time that Nikola began working with a special purpose acquisition company led by former GM Vice Chairman Girsky. Also known as a “blank-check company,” SPACs have become a popular way to take startups public to quickly raise funding – money that, in this case, Nikola needed to complete development work on heavy trucks like the Nikola One, as well as the Badger. It also faced the daunting challenge of setting up production operations for its powertrain technology and vehicle assembly.

Until early this month, it seemed like Nikola’s financial worries were set aside. After listing on the NASDAQ, Nikola stock surged as high as $94 a share – in the process, making Milton’s initial 35% share worth an estimated $9 billion. Since the Hindenburg report was released, however, the shares have fallen by nearly half. It closed Friday at $34.19 and, as of early Monday morning was off another $7, sliding under $27 a share. 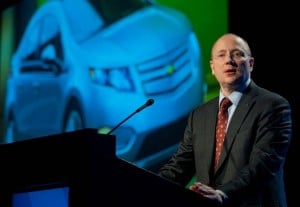 Steve Girsky served as vice chairman at GM during its emergence from bankruptcy.

The crisis triggered by the release of the Hindenburg report had raised concerns that another financial boon could fall apart. As part of the deal with GM, the Detroit automaker said it would provide both the hydrogen fuel cells and the batteries that Nikola vehicles would rely on. GM also agreed to assemble the Badger pickup alongside the EV trucks of its own it planned to produce, such as the GMC Hummer. That deal, Milton said earlier this month, would save it about $4 billion – while giving GM an 11% stake in the startup.

“You couldn’t dream of a better partnership than this,” Milton said Sept. 8 during a joint news conference with GM CEO Mary Barra.

For now, at least, the Detroit giant said in a statement it remains committed to the alliance. While GM “acknowledge(d)” Milton’s decision to resign as chariman, it said it will continue to “work with Nikola to close the transaction we announced nearly two weeks ago to seize the growth opportunities in broader markets with our Hydrotec fuel cell and Ultium battery systems, and to engineer and build the Nikola Badger.”

In its report, Hindeburg laid out numerous allegations of fraud, large and small, among them claiming Nikola had staged a video to make it appear one of its initial semi-truck prototypess was cruising down a hill. At this point, Nikola has produced and sold no vehicles of its own, though it claims to be moving forward on setting up a plant to produce heavy-duty freight haulers like the Nikola One. The facility, based outside Phoenix, is expected to go into production in 2023.

A day after the short-seller’s report was issued, Nikola released a statement saying its “legal counsel proactively contacted and briefed the U.S. Securities and Exchange Commission.” The SEC has now launched an investigation, according to numerous reports, as has the U.S. Justice Department.