Not a Raptor, but an impressive option for the midsize truck. 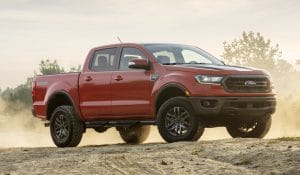 For the new model year, Ford is offering is most off-road capable Ranger ever with the new Tremor.

Rumors about a Raptor Ranger have been buzzing around for a while, and Ford is finally answering the question about if it will produce a version of its midsize pickup with an impressive off-road package with the introduction of the 2021 Ford Ranger … Tremor.

Admittedly not the Raptor some have asked about, the Tremor off-road package offers those who want a little more rough-and-tumble capability in their midsize plenty to be happy about. 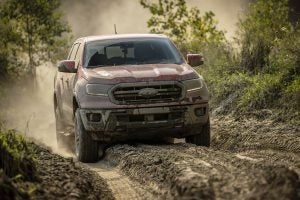 The new Tremor is powered by a 2.3-liter EcoBoost putting out 270 horsepower and 310 pound-feet of torque.

Ever-mindful that today’s trucks are just as likely to haul kids to soccer games as they are to ford a river, the new Tremor package expands upon the FX4 package’s capabilities while ensuring it can still answer the bell when it comes to hauling and towing in comfort.

The company calls the new model the most off-road-capable factory-built Ranger ever offered in the U.S. The Tremor Off-Road Package is available on mid XLT and high Lariat series 2021 Ranger trucks with Super Crew 4×4 configuration, adding $4,290 to the truck’s sticker price.

What does that get you? Well, it starts with a lifted suspension, redesigned front knuckles and 32-inch Continental General Grabber A/TX all-terrain tires on new 17-inch Magnetic-painted wheels that combine to deliver 9.7 inches of ground clearance – 0.8 inches more than the base Ranger Super Crew 4×4.

The truck gets Fox 2.0 monotube dampers with remote rear reservoirs and hydraulic rebound stops tuned for comfort on pavement while offering control over severe terrain. The shocks are specially tuned with progressive rebound end zone damping to support vehicle control where the pavement ends. 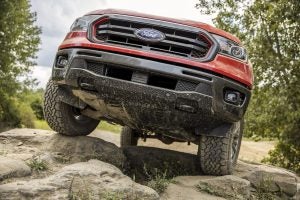 This combination of lift and suspension components gives the Ranger Tremor a 30.9-degree approach angle, up 2.2 degrees from the base Super Crew 4×4, a 25.5-degree departure angle, which is up 0.1 degrees and a 24.2-degree breakover angle, up 2.7 degrees. The end result is a 6.5-inch improvement in front-suspension travel and 8.1 inches in the rear, i.e. more room for roaming.

Ranger Tremor includes a frame-mounted steel front bash plate and underbody skid plates, rear locking differential, Terrain Management System with four distinct drive modes and Trail Control. The traction control system is recalibrated for improved acceleration and traction in gravel, “so customers can punch it in a washout with gusto.”

On the “everyday” side of the ledger, in this configuration the truck can still haul 1,430 pounds of payload and tow as much as 7,500 pounds. So not only can it handle rough terrain, it can bring the equipment needed to stay nearby. 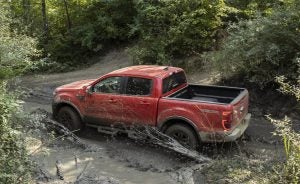 The Tremor package is an additional $4,290 and available for the 2021 model year.

The thoughtful engineers at Ford also made it so owners can control accessories like winches, lights and air compressors using to Tremor’s six-switch auxiliary power bank mounted to the dash with rated loads of 25 amps, 15 amps and 10 amps, plus three switches at 5 amps.

The truck is still powered by the 2.3-liter EcoBoost mated to a 10-speed automatic transmission that puts out 270 horsepower and 310 pound-feet of torque.