A classic sports car concept gets a retro-futuristic look – and a lot more power. 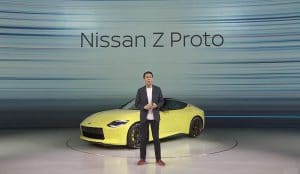 There’s been plenty of speculation in recent years suggesting the sports car has reached the end of its road. There’s no question that demand has slumped sharply, along with more conventional sedans and coupes, but a number of manufacturers remain committed to the market and Nissan is intent on backing that up with today’s online unveiling of the new Nissan Z Proto.

The automaker is intentionally leaving a few blanks amidst the details it’s sketching out. But the big bets suggest the Proto is a very thinly disguised version of the production model set to launch this coming year. And what we see is a modern design with distinctly retro touches, a design that Nissan says, “pays full respect to 50 years of Z heritage.”

“The Z represents the joy of driving in its purest form and has helped shape Nissan’s DNA as a passionate, innovative challenger,” said Nissan CEO Makoto Uchida. “Ever since the first generation, it has captured the hearts of car enthusiasts all over the world. That’s why we’re so excited today to be able to say to them: Yes, the next one is coming!” 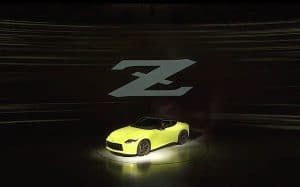 Uchida said the new Z would be available with a six-speed manual transmission.

The Z Proto, done up in bright pearlescent yellow paint, is likely to bring to mind the original Nissan 240Z, with its long hood and an aggressive, fastback roofline. The retro touch becomes even more obvious when you spot the canted, teardrop-shaped headlamps, though the rectangular grille is much more modern.

“Ultimately, we decided the Z Proto should travel between the decades, including the future,” explained Alfonso Albaisa, Nissan’s head of design.

Even where the look is “historic,” there are distinctly modern elements. While those headlamps, with their twin half-circles, may recall the Japanese Domestic Market, or JDM Z-car of the ‘70s, Nissan here has opted for LED lighting, as it did for the taillamps which reinterpret the old 300ZX.

The Z Proto gets a futuristic update with the use of carbon fiber for its side skirts, front lower lip and rear valance. Completing the exterior design are 19-inch alloy wheels and twin tailpipes.

The original Z offered a cockpit-like layout to its cabin, a design that is picked up – and modernized with the Proto which was influenced by the Japanese automaker’s motorsports program. 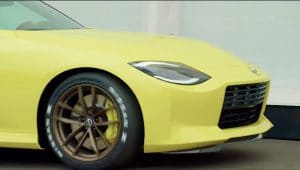 The Z Proto certainly bears a familial resemblance to past Z cars.

While there are hints of the early days of the Z line, the overall look is more modern, with a deep dish steering wheel incorporating modern controls. Also within easy reach is a touchscreen infotainment system, while critical information pops up on a 12.3-inch digital gauge cluster.

Picking up on the bright exterior paint, the cabin features yellow accents, including the piping on the layered seat fabric.

(Nissan lifts the covers on the next-gen Rogue.)

Nissan is being cagey about powertrain details. It’s now confirmed widespread expectations that the Z will adopt a twin-turbo V-6, but displacement, horsepower, torque and performance numbers will have to wait, it seems.

“Each generation had a more powerful engine,” Nissan helpfully noted in a press release. But it cautions that power isn’t everything. 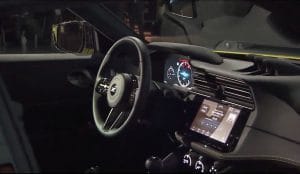 The interior of the Z Proto pays homage to past Z cars while offering a modern bent, such as digital instrumentation.

“Z is more than just powerful and agile,” said Chief Product Specialist Hiroshi Tamura. “It is designed to create a connection with the driver, for the car to be a ‘dance partner’ for their on-road adventures.”

That said, we’ve got a reasonable inkling of what we can expect from the production model, internally codenamed the Z35 – which will share platforms with the Infiniti Q60. That coupe also uses a version of the V-6, displacing 3.0 liters, it turns out. For the luxury brand, it manages a solid 400 horsepower, paired through a 7-speed automatic and delivered to the back wheels. The Z Proto opts for a six-speed manual though the production car almost certainly will offer an automatic, whether that 7-speed from Infiniti and something else.

Could we get all-wheel-drive? It’s possible, we’ve been told, but, apparently, unlikely.

Some rumors have also suggested Nissan might come up with a hybrid, even an all-electric, version of the Z-car during the next-gen sports car’s lifecycle. Possible and, considering the realities of designing a global car these days, there’s a solid likelihood Nissan has, at the least, prepared for such possibilities. For now, though, that’s not part of the discussion.

Yet another question is whether there might be a convertible version in store. That seems unlikely considering Nissan dropped the ragtop version of the outgoing Z-car a year back. 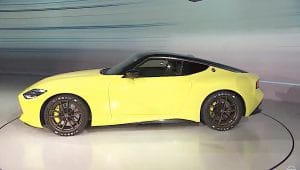 The design of the Z Proto borrows heavily from the earlier models like the 240Z.

As for what to call the production car, that appears to have been a subject of some debate within Nissan. There was the option of going back to the original 240Z – without the first model’s Datsun brand name, of course. Considering the displacement of the twin-turbo V-6, Nissan could have gone with 300Z or even 300ZX. But the smart bets appear to be on 400Z, reflecting the output of the new engine.

Overall, it’s clear that the second-largest Japanese automaker has a very clear target in mind when it hits showrooms next year: the reborn Toyota Supra. With that in mind, pricing could jump from the current Z-car base of $31,000 all the way up to around $40,000, in keeping with Toyota’s offering.